OR gates used as NOT

Why are OR gates used with shorted inverted inputs, effectively acting as NOT gates in this circuit? (Page 9 of this datasheet.)

What's the difference with directly putting a NOT gate, other than having a bigger capacitive load due to the transistors gates? Is it to have a bigger delay?

Why does the inverter between 14 and 15 has its inverting bubble drawn at the input and not at the output?

Also I guess the output inverters are put in parallel in order to increase the driving capability, i.e. to lower the output resistance. 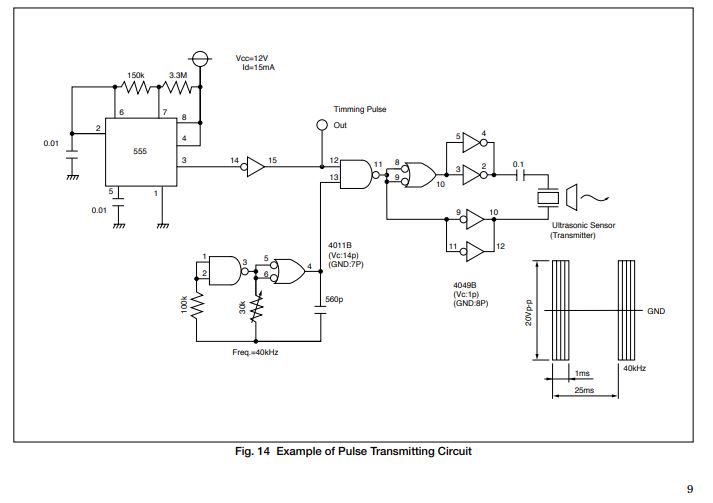 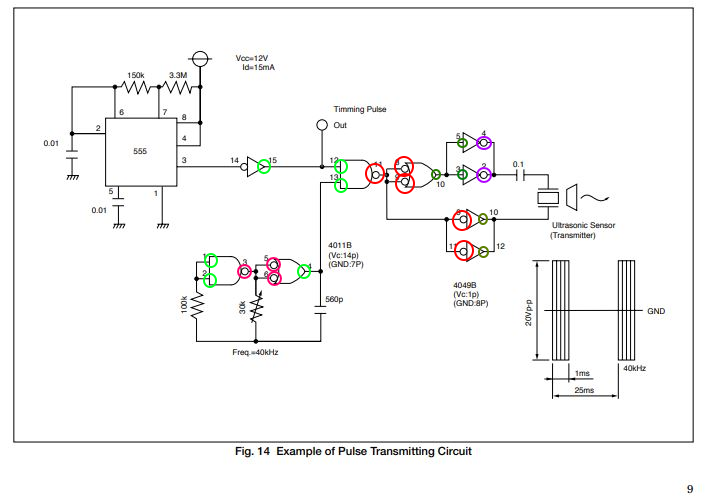 This is a (admittedly confusing) style that uses the DeMorgan equivalents.

For example the gate drawn as:

is logically identical to:

When you connect the two inputs as is done in this circuit, you get an INVERTER.

The "bubble input" gate is also identical to the more common INVERTER symbol.

As far as why they doubled-up the inverters driving the output transducer, I'm sure the reason is that they wanted more drive current to the transducer than a single gate could provide.

It's not at all clear why they drew this schematic in such a confusing manner. In my experience the DeMorgan equivalent gates are rarely used and then only to convey something about the logic. Here, it doesn't make any sense to me.

When the Japanese do something weird, I initially assume there is a hidden reason before I consider it as a mistake.

First some CMOS background for some millenials.

also I notice that the 4049B is now obsolete by TI and others.

I recall the CD4xxx family had a minimum analog voltage gain of 10 at 5V but higher at 10V. So you are certainly welcome to use more than 2 parallel CD4049 buffers in parallel. This will reduce Ron or Zout but not increase the voltage gain or rise time. As you can see from the datasheets the prop delay in the same family depends on the number of cascaded gates and not so much on the cascode multiple inputs of the NAND gate structure (not shown).

Also, notice the Piezo must be relatively high impedance compared to the 0.1uF series Cap at 40kHz ( i.e. much lower capacitance)) for this to be efficient.

It is nice to see a schematic that is drawn "correctly". That is in quotes because it is correct, but way out of favor. Almost no one pays attention to showing the logic state polarity of a signal. In parallel with that, almost no one teaches DeMorgan transformation with the emphasis it deserves. This is part of the difference between a schematic diagram and a wiring diagram. When communicating a design concept, how a gate functions within the circuit is much more important than the traditional name for its part number. But that is a separate rant.

Using your schematic as an example, look at the 555 output signal on pin 3. It drives a standard inverter. With the bubble on the input, the schematic is saying that it is the low input state that is the "action state". This is called a "negative-true" inverter. When its input is low, its output is high and this is what causes something to happen; in this case, allowing the output of the two-gate oscillator to be passed through to the transducer. The NAND gate input also has no bubble, indicating that it is the high input that causes a desired action.

Looking at gates 4-5-6 and 8-9-10 (sure do miss reference designators), while these are usually described as NAND gates, the full name is a positive-true NAND gate. But in this circuit, the function as a negative-true device, and the negative-true transformation of a NAND gate is an OR gate. Showing a negative-true input follows one of the rules of this type of symbology - to preserve the correct logical polarity, a bubble always drives a bubble. If it doesn't, then you put a slash across the signal line next to the gate input where the standard depiction changes.

Technically, this type of schematic symbology still is required in military projects, although, again, almost no one does it this way anymore. When properly done, it makes a schematic page with maybe a hundred or more logic gates splattered around much easier to read (decipher?) without assistance from the original designer.

There is more to the logic symbol language than just bubbles. Texas Instruments played a huge roll in both the development of integrated circuit logic devices and the symbols used to describe them. Their datasheets still use them. The functional diagram of an 8-bit latch is just a box with pins and names, but the logic diagram has specific non-text designations for open-collector outputs, edge-triggered versus level-triggered clock inputs, etc.

As for your other questions ...

The concern is that even with identical parts, or two gates in the same package, the two gates do not transition at ((exactly)) the same input voltage. No matter how rapidly the input voltage changes, there is a nanosecond or three when one output stage is high and the other is low, causing cross-conduction between the power rail and GND (sometimes called a "shoot-through" current). No matter how brief, over time this degrades the output transistors and shortens the device's life. When it comes to designing for long-term reliability, this is a very real thing.

Not the answer you're looking for? Browse other questions tagged digital-logic schematics logic-gates or ask your own question.

30
Why have two NOT gates in series?
3
Difference between an inverter and a buffer with active low input
0
Using Logic Gates to Power a Motor
0
Non-Inverting Tri-State buffer with transistors only possible?
1
vibration sensing circuit doing so great
0
Using 3-state buffers for multiplexing
0
Delayed ON level on pulse
2
What is the most efficient way to invert digital signal? NPN, MOSFET, logic gate
0
CMOS (wrong) OR gate with 4 transistors