How to implement control of the bidirectional buck-boost dc/dc converter in software?

I am at the beginning of the development process of the control software for this dc/dc converter i.e. bidirectional buck-boost converter 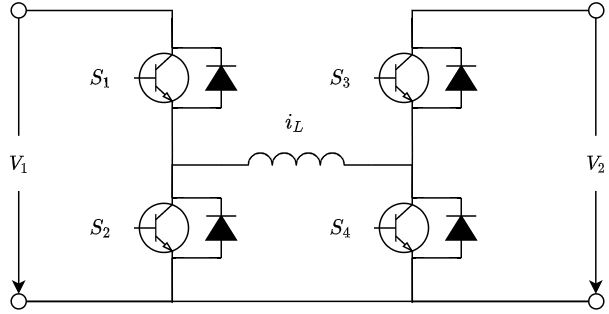 Let's say I will use this control strategy. A couple of questions arise in my head

Thanks in advance for clarification.

How to determine whether the energy shall be transferred from V1 to V2 or from V2 to V1?

Well that's your choice, it depends how you want to use it.

Yes, it is symmetrical.

A lot of use cases need both current and voltage to be controlled. For the battery example above, when it is charging the battery, it would work as a voltage-limited current source, so the inner current loop would need to be set to constant charge current suitable for the battery, and the outer voltage loop to max charging voltage. In the other direction, using the battery as a power source, it would regulate voltage on the output, but the current loop would still have to be set to respect the maximum allowed battery discharge current, for example.

Let's say I somehow determine the direction in which the energy shall be transfered then I need to determine whether the buck or boost mode shall be used. Can the control software made this decision based on only on the measurements of the V1 and V2 and their relationship i.e.

If it transfers energy from V1 to V2 and V2 is close to V1 but just a bit lower, then you might think it is going to run in buck mode. But there will be losses in the converter, so you may actually have to use a little bit of boost mode even if output voltage is lower than input voltage, just to compensate for losses. And there will also be minimum and maximum on-time and off-time, can't have a 99.9999% duty cycle for example.

According to the summary of the operational modes mentioned above each mode contains several transistors which are permanently off.

Yes, but no, if you use bootstrapped drivers for your power devices, you have to switch them once in a while to recharge the bootstrap cap. The bottom FETs can stay on continuously, but not the top FETs.

All these constraints means "it's not that simple" as a Vin<Vout test.

It will also have to switch between continuous PWM mode and various discontinuous power-saving modes like cycle-skipping at light load.