I'm looking for something that can switch on and off a 230 Vac, 26mA LED lamp, under microcontroller control. Would a VO2223A, driven by (say) a PIC or Arduino, work as a low-current SSR? The load isn't inductive, so I'd hope not to have to use any form of snubber (but perhaps for safety's sake...) The power consumption of the lamp is just under 8W.

Since I'm looking to run 70 or so lamps (and assuming that such an opto-coupler can be used as a cheap SSR), are there multi-channel variants of the chip?

Yes, the VO2223A can be used as a moderate current SSR for AC loads: It is a power Triac switch.

The VO2223 and VO2223A parts are in fact designed for switching power-line (up to 600 Volts) AC by low-voltage control signals such as from a microcontroller, with 5300 Volt isolation between the control and the output circuits.

If the LED used is in fact rated for 26 mA at 230 Volts (datasheet would help confirm), that is a power rating of just under 6 watts. It would thus be safe to operate up to 7 such lamps in parallel on each VO2223A part.

Note that the datasheet derates the current capacity to approximately 0.3 Amperes at 80 degrees C, from the nominal 1 Ampere at 25 degrees. This is not a problem in the stated application, as 7 of the LED lamps would draw approximately 0.182 Amperes altogether. 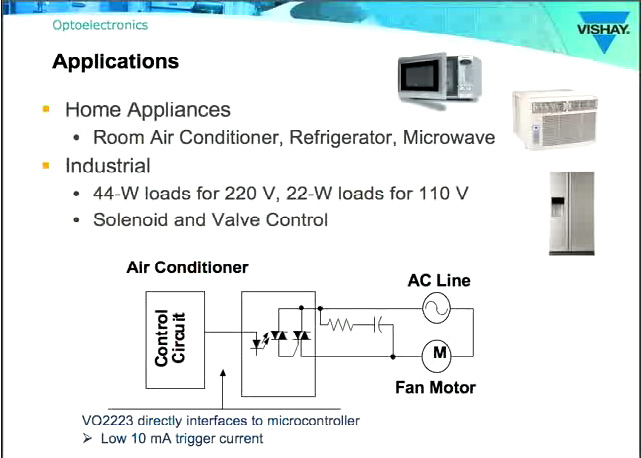 Not the answer you're looking for? Browse other questions tagged opto-isolator solid-state-relay component-selection or ask your own question.