Why the capacitive divider in this output stage?

I have this output driving stage, reverse engineered from a generic Chinese mist generator: 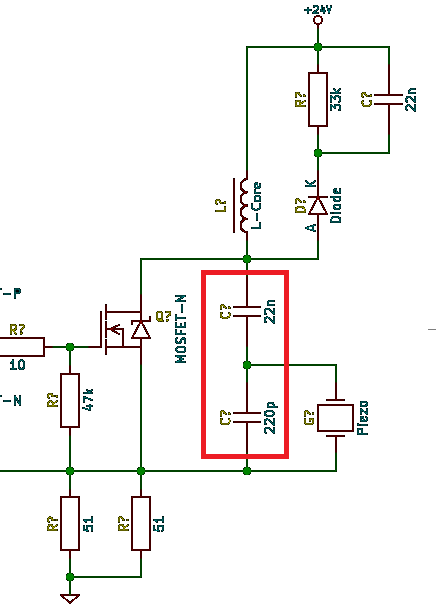 The goal is to drive the piezo transducer with a given frequency (more or less 1.7MHz or 2.4MHz depending on the transducer) to put it in resonance. It will then do its work and turn water in vapor (more or less, details are not important).

In my understanding it works in this way: from the left come the gate drive wave (at 1.7MHz or whatever, square wave), the MOSFET will charge the coil like a storage choke in a flyback converter and on gate release the inductor will dump the stored energy on the load, down right.

The upper right components are a standard RCD snubber to keep the coil in reset and quench transients, the two resistors are current shunts to help finding resonance (the frequency varies slightly with load and environment).

The 'load' is the thing which baffles me: the transducer in resonance is equivalent to about 1.7nF (body parasitic) in parallel with a couple of ohm (the 'transducing' resistance). Why the two capacitors? Couldn't they simply dump the power right on the transducer or is that some kind of impedance matching network?

At first it could seem that the 22n is here to resonate and cancel with the storage choke (unknown inductance, for now) but in a pulse transfer situation like this what is the 'source impedance' of the discharging choke?

EDIT: in theory, at least when doing power conversion, the storage inductor is modeled as a current source with the ESR in series, however a) current sources have the internal impedance in parallel and b) does matching work with current sources too?

As for the 220p I think it could be a protection to avoid overstressing in case the transducer gets accidentally detached or maybe some help in shaping the pulse (to let pass thru all the higher harmonics in the square wave).

Browse other questions tagged inductor impedance or ask your own question.

1
Magnetic coupling of inductive loads
5
Impedance matching an RLC circuit (inductor macroscopically drawn on PCB)
1
Impedance matching for amplifier output
1
What could be the reason for failure in using a single-phase full-bridge square wave inverter to drive a coil for wireless charging?
1
Capacitive current leads, inductive lags, but how does this translate to voltage on an output?
2
How to choose RF choke in the biasing circuit of varactor-tuned resonant circuit
1
Half Bridge Inverter Effect of Load on waveforms
0
fastest B field rise time in an inductor/electromagnet