While reading the specification of the probe, I got confused with a few terms. 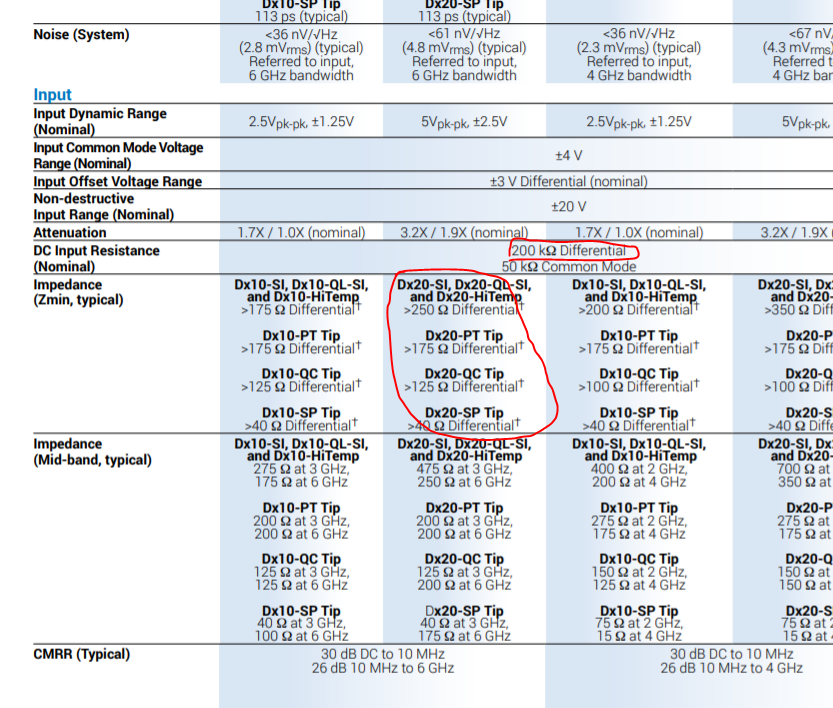 On page 7, we have a specification table from which I have taken a snapshot.

Please help me understand what the "DC Input resistance" and "Impedance" terms mean in the above table.

If the signal source was an ideal voltage source in series with a source resistance of 1 ohm, then a probe with 200kohm input resistance would decrease the measurement by 1/200000.

It's basically the same thing as why a DVM or voltmeter has high-impedance inputs. Higher impedance is good.

A DMM rated for 200kohm impedance (terrible for a DMM but bear with me) would be adequate for measuring resistances up to 10's of kohm, but would run into performance limitations if you tried to use it to measure insulation resistance (>1000's of kohms). So treat the DC input resistance spec as a performance limit spec, not as a required matching spec.

The CMRR (typical) is rated for testing at 10MHz and also up to 6GHz. A probe that would be just fine at 10MHz (typical for a hobbyist white solderless breadboard) would look like a very different apparatus at 6GHz (expert RF microwave radio designer). Small variations in the dimensions and materials give rise to subtle performance differences at high frequencies.

What matters for your application (probing a 100ohm terminated LVDS differential pair) is actually the signal bandwidth. If you're running that LVDS pair at a bandwidth of 1GHz you're going to need a better-performance $$$ probe than if you were running at only 50-100MHz. A lower-performance probe would have limited bandwidth and could obscure timing details that you might care about. Same with the oscilloscope attached to the probe, wouldn't make much sense to connect a premium 6GHz probe to a 10MHz "student" oscilloscope.

Not the answer you're looking for? Browse other questions tagged voltage current oscilloscope differential lvds or ask your own question.

9
Transmitting HDMI/DVI over an FPGA with no support for TMDS
3
Using oscilloscope to measure voltage across a resistor
2
Differential impedance of LVDS rules and tips?
2
Signal 'bounces' back to high
0
What is the expected output of an LVDS IO cell of an FPGA (or just simulation) when the P and N pad inputs are both the same logical value?
0
LVDS comparator re-triggers on falling edge
0
What is the meaning of Change in Output Offset Voltage between complementary output states