Simple generator to light a series of LEDs question

Playing around with a simple circuit idea with friends but none of us have really worked with circuits since college so we need a little guidance. The thought is to have a small generator (someone said a stepping generator) being turned by a wheel. Then we connect some sort of rectifier then to SOMETHING (the part we can't remember) that will pass current to about 8 LEDs but divert any excess current to either a battery or capacitor to store until the wheel stops being turned then the battery/capacitor will discharge to the LEDs.

Guys I know this is a very simple circuit so sorry I can't remember my electronics from college. Any assistance is appreciated.

If you wanted the LEDs to continue glowing after the generator is no longer turning, you could add to this circuit a capacitor in parallel. You will want a resistor in series with the LEDs so that the LEDs don't clamp the voltage across the capacitor. As you turn the generator the LEDs will glow. Also, current will flow through the capacitor to keep its voltage equal to the voltage generated by the generator, and in doing so, energy will be stored. When you stop turning the generator, this voltage will persist, which will light the LEDs and also keep the generator spinning, until the capacitor has no energy left. I haven't done the math, but intuition says you will need the biggest capacitor you can find.

To prevent the capacitor from turning the generator, thus reserving more of its energy for the LEDs, you can put a diode in series with the motor. You could even make it an LED, which is a kind of diode, to visualize the flow of electricity. Here's the circuit so far: 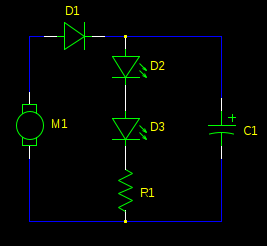 It's hardly efficient, but it is simple.

Not the answer you're looking for? Browse other questions tagged led batteries capacitor generator or ask your own question.