Is it normal to have this much fluctuation in an RTD measurment in boiling liquid?

I'm using a MAX31865 RTD measurement IC, and a standard PT100 RTD to measure maple syrup temperature as it's boiling (219 degF). At ambient, the temperature measurement is reasonably stable. But, when boiling, I get a substantial amount of drift. I need stability preferably in the range of ±0.1 degF. In my data below, I'm already applying a pretty heavy rolling average. And, the data you see was taken in seconds, so it's fair to say I don't have an electrical noise issue (and there's really no frequency component). This looks like random drift. Do I have a measurement problem, or is this a physics problem? Does boiling liquid drift like this? 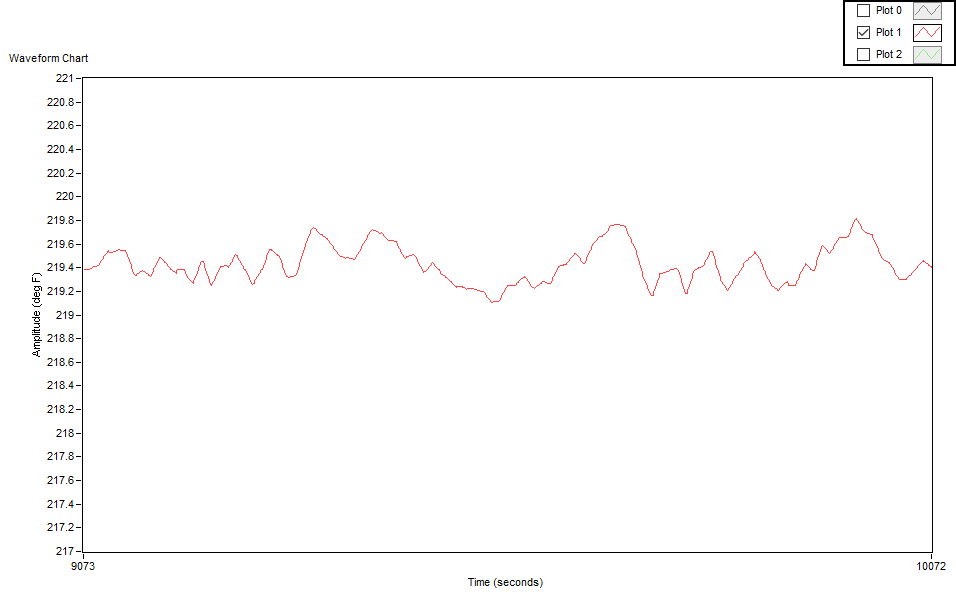 UPDATE:
I took the suggestion of @sstobbe and replaced the RTD with a resistor of similar resistance that would give me a 219 degF reading. The reading is solid as a rock. The stability is actually within the precision of the device. I see a very infrequent change of around 0.016 degF (I should mention that I'm using an oversampling routine to increase the resolution). So, I am convinced that this is a physics problem.

Next, I think I will use use the suggestion of @10ppb and try to increase the thermal mass by using a metal block of some sort. Unfortunately, agitating the syrup, or giving it some sort of recirculation, is not an option. Any other mechanical suggestions on how to overcome the measurement volatility induced by the boiling?

UPDATE 2: I tried a couple things last night with a boiling pot of water. I wrapped the end of the RTD with about a half inch of aluminum foil. There was perhaps a 10-20% improvement. Then I put a test tube upright in the water bath, added a little bit of vegetable oil in the bottom of the test tube, then put the tip of the RTD in the oil. The thought being, the oil wouldn't boil (and cause measurement fluctuations), but would be a good conductor of heat. While the water was at 212 degF, I couldn't get the oil past 204 degF. I waited at least 20 minutes. I'm sure it would have reached equilibrium at some point, but it was clear this isn't going to work for my application.

Also, someone had mentioned that they were surpised that my data wasn't more erratic. It actually is quite erratic. The data shown has a heavy rolling average applied.

That's a pretty mediocre chip to be expecting 0.1°F stability from. At 1mA 0.1°F is about 8uV. The chip has typical noise of 150uV over the bandwidth, and thermal EMFs can cause errors of some uV here and there with little trouble.

If you are running the probe at high current you might also be getting variation from bubbles and heat loss, but less from the noise and air currents. Depending on construction self-heating will be an issue even at 1mA when you are looking for +/-0.055°C.

Your reference resistor should be a precision type 25ppm/°C or better.

If you have a reasonably good digital multimeter (preferably 4-wire) you can just hook it directly across the sensor (remove the other circuitry, obviously) and confirm one way or the other.

The physics side of the problem:

Boiling a mixture is even more complex from boiling a pure liquid. The constituents of the mixture (sugar and water in your case) constantly change concentration. This changes both the overheating needed to create a new bubble and the equilibrium boiling point. The bubbles carry amounts of water between the bottom and the top, making the solution weaker at the top. Bubbles also mix everything at some rate.

In short, you are lucky to get fluctuations that low and this is probably because of the sensor not being quick enough.

I haven't tried measured boiling liquids to this accuracy, so curious how this turns out.

SUMMARY / UPDATE To try to see if effects of a hard boil make a difference on the unwanted 0.01-0.1 Hz order-of-magnitude signal components, perhaps try the following (all together)

These may not be practical for making maple syrup, but if I wanted to learn how to get smooth boiling temp data with limited measuring hardware, that is what I would try.

FWIW there is a pressure dependence for the boiling point (and also dependence on dissolved substances, as the OP clearly noticed). At first glance, those are "DC" issues.

For pure water at standard conditions, the coefficient vs pressure is approx. 1 deg C / 20mbar (eyeballed from this data).

I would very much wonder if a "gentle" boil, heat flow just barely above the point of homogeneous nucleation, would be much preferable to a "hard" boil if you need measurement stability...

As a debugging tactic, maybe try bringing the liquid just below homogeneous nucleation (bubbles on the walls only [*better: add boiling chips/stone]) and see how steady the reading is . . . Maybe that will help produce clues as to whether the issue is electronic or physical.

[update2] Watching some actual boiling just now, hot spots on the bottom probably would dominate all other factors. More reason to stir.

Do I have a measurement problem, or is this a physics problem? Does boiling liquid drift like this?

I know that you can use boiling liquids as a reference if the mixture is the same chemical. I don't know if the converse holds true because you have several chemicals each with different temperatures (water, sugar, and other volatiles each with a different boiling point). Since there isn't a lot of information about boiling molasses outside of the boiling point, I'd think you'll have to do your own testing.

A good way to test your probe would be to use water which should be pretty close to 100C (depending on your elevation) and is commonly used as a reference. Or just to get a reality check buy a reference probe with an accuracy of 0.1C to validate your probes measurements in the material.

This is mainly in response to the updates added since several other answers, but would be too much for comments.

The metal (copper/aluminium, does it need to be food safe?) block's thermal mass will provide time averaging. Its size will provide spatial averaging, and if you have packets (you do, I'm sure) of hotter/cooler fluid it should help by sampling several of those.

Another way would involve multiple sensors in different places. If you have the ability to read several, seeing how they're correlated as a function of separation may be instructive (in 3d but especially vertically and radially if the vessel is a cylinder). Pack them together and they should follow each other fairly well, confirming fluid effects rather than electrical. Measuring at several points and averaging may in fact be a solution if you want a representative sample of something that's not uniform.

BTW The nice easy DS75 I've used (integrated SPI thermometer) probably doesn't have the absolute accuracy you need, but would be an alternative during development and reading several on a cheap/simple device is trivial.

Not the answer you're looking for? Browse other questions tagged analog sensor adc temperature rtd or ask your own question.

0
How much is the current consumption of this sensor (tmp102)?
1
How much current will LM317 pass in this circuit?
0
What does this resistor do in this RTD wheatstone bridge?
0
Is this normal for a 12 bit Microcontroller ADC (STM32F303)?
1
Is this opto input current sized wrong and can it have such symptoms?
0
RTD with a +/- 0.01 oC from its normal set value (78.37oC)
0
What kind of output does this sensor have?
1
Have I obtained the correct simplified transfer function for this RLC circuit?
4
Why does a resistor have this value in a circuit with an operational amplifier?