Help me understand this CDI circuit

I am trying to understand how the CDI module in my RC airplane engine works. Unlike newer engines, the engine I have is still using a "magneto style" ignition, which does not require a DC source to operate.

Googling around, I found an old post with the schematic attached: 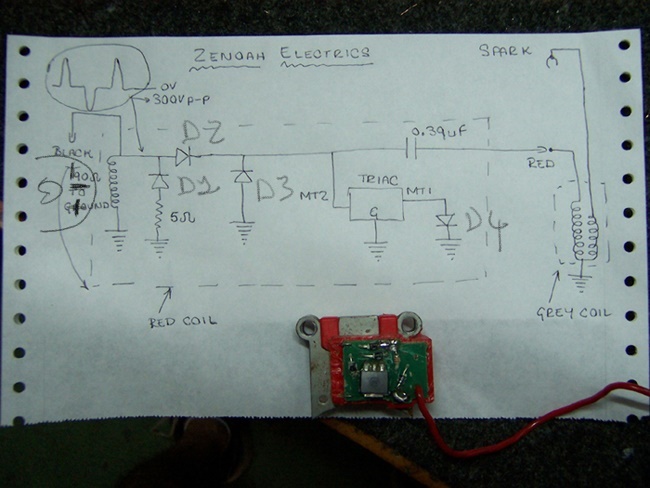 The coil on the left side is energized by the passage of three magnets (+-+ configuration) mounted on the flywheel. This is already different from most of the small engine ignitions I have seen, which use two magnets.

If I read the schematic correctly, the AC voltage generated on the left coil is rectified by D2 and used to charge the 0.39 uF C1 capacitor. The 5 Ohm resistor and D1 then would clamp the negative pulse.

At the right time, the TRIAC goes into conduction, and the capacitor discharges via the coil on the right. At this point, D3 C1 and the grey coil form a LC circuit where the voltage should oscillate until dissipated.

I have attached a scope to the black wire on the left of the diagram when the engine is running, but what I observe are only positive peaks. This suggests that either a diode is missing from the circuit or else the black wire connects to the right of D2. But my real question is what triggers the TRIAC? Normally, I would expect the gate of the TRIAC to be connected to a triggering circuit, which I do not see in this diagram.

Also, I know that the ignition fires when the second and third magnets are almost directly under the "legs" of the ferric core, over which the coil on the left must be wound. Therefore, I think that the negative pulse must somehow act as a trigger. Yet, I do not see how this would happen based on this circuit.

Finally, if I wanted to build a small testing rig where I use a drill to provide rotation to the flywheel, can I safely use a resistor in place of the grey coil? And if so, what value would be appropriate?

Without primary L, Coupling factor and n turns ratio, it is hard to synthesize, but I’Lyl take a stab at it.

The diodes clamp the negative spikes and the positive pulses trigger the Triac to discharge the stored Cap voltage into a step up transformer.

The cap voltage ought to look like a sawtooth signal. The input secondary may not look so symmetrical with a negative diode clamp load. The output ought to reach 40kV into spark plug carbon resistance wire.

Not the answer you're looking for? Browse other questions tagged automotive triac or ask your own question.