Do residential smoke alarms monitor their sounders? If so, how?

This is an open question, and wondered if someone out there might have the info on a typical fire alarm architecture, such as for this generic alarm: 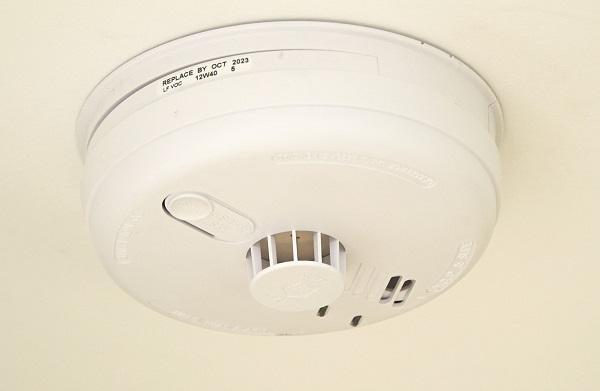 Obviously as much as the detection of smoke is critical, it is no good if it is unable to warn the occupants.

I know that most residential smoke alarms have a test button to periodically test it. However I was wondering if there are any further controls that is common practice to:

I came across this 3 wire piezo topology (whats-the-third-wire-on-a-piezo-buzzer), and I wonder if the 3rd wire could actually be used for monitoring.

There's really not much that can go bad on a buzzer. They are electrically and mechanically pretty simple. They are inside the housing, so physical damage from outside is unlikely - you'd see the broken detector housing.

I suppose a bug could get in through holes and jam up the works, but at worst the buzzer would just not be as loud as it ought to be.

The residential smoke detectors I've looked inside of (from my own house when installing new ones) only had one buzzer.

Three pin buzzers use the third pin as part of the oscillator circuit. I suppose you could detect the oscillation that way, but you have no way to signal a failure.

Periodic test of the smoke detectors is your best bet. Go around and push all the test buttons and make sure they all buzz.

Smoke detector systems in commercial areas are different. The individual detectors may (or may not have buzzers,) but the system as a whole will have multiple sirens in various locations that will be triggered in groups depending on which detector triggered.

There's redundancy built in in that regard. No zone will depend on just one siren or just one detector.

The short answer is that the certifying laboratory (UL) have decided that a certain mean lifetime with a regular inspection is sufficient to certify the device as a fire alarm.

While device makers will try to market and distinguish themselves, for something like a fire alarm, at least in north america, it is effectively defined by the UL requirement. (reference ul number TBD)

As far as I know it is not considered unsafe to use fire alarms that require manual annual inspection in a household setting so the UL is in sync with national fire codes.

My Nest Protect 2nd Gen Smoke + CO Alarm does indeed test its speaker periodically. It does so via an internal microphone that detects the speaker's sound during the test period.

I am somewhat concerned with the privacy implications of such an arrangement (as the Nest Protect is connected to the internet). The price-point is also high for a smoke detector, but I'm otherwise satisfied with the product.

The third wire of the 3-wire piezoelectric device can be used to monitor the piezoelectric's output, as per the link you provided.

Not the answer you're looking for? Browse other questions tagged redundancy functional-safety or ask your own question.

51
What's the third wire on a piezo buzzer?