The below circuit supposedly provides constant current to an LED. I tested using everycircuit.com and that seems correct (used R = 70 ohm for example). 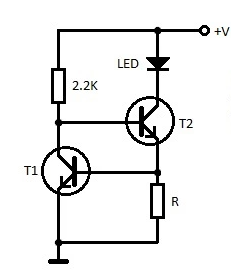 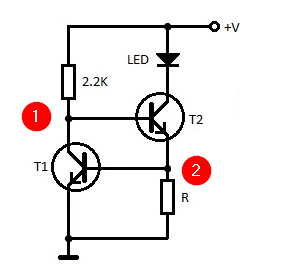 More precisely speaking, "reading" means "understanding" here. So, the question is, "How do we intuitively understand circuits?"

But what does it mean to understand a circuit? For this it is not enough just to see that, for example, "when T1 is on, T2 is off, etc.", ie. only to establish concrete facts. To understand a circuit, first at all means to see the basic idea, the concept behind this mixture of components. If you fail to do so, as they say, you "will not see the forest for the trees"... you will not understand what you have understood...

You have correctly pointed out intuition as a means of understanding circuits. Also add imagination, common sense, analogies, emotions... and, of course, accumulated previous knowledge... and you will have everything you need to understand circuits. Then, when you decide to implement the circuit, besides these "qualitative means", you will need "quantitative means" for its calculation and a lot of "details"... but at this stage you do not vitally need them.

We begin with looking for something known - more elementary circuit building blocks (subblocks) and basic ideas (concepts). Let's do it with your circuit...

Regulating element. The first thing we can notice in your circuit is that the transistor T2 is connected in series to the LED with its collector and emitter; so it regulates the current through the LED like a variable resistor (rheostat).

Negative feedback. The two amplifier stages connected in a circle lead us to think that there is negative feedback here. Let's see if that is the case...

To maintain a constant current through the LED means the transistor T2 to maintain a constant voltage across the resistor R. We see the voltage VR is compared with T1 threshold voltage of 0.7 V and amplified by T1 that controls T2 so as to keep VR constant. For example, if the LED current decreases for some reason, VR decreases as well. T1 increases its collector voltage and T2 increases the LED current. Yeah, sure... that is the great principle of negative feedback.

For this purpose, this emitter follower should be driven by a constant (reference) input voltage. We know it should be obtained across some diode… but we do not see such a diode here… we see a transistor (T1). What the hell is this?

Widlar's idea. We notice the T1's behavior is very interesting. Since about 0.7 V is lost across the T2 base-emitter junction, the negative feedback forces T1 to raise its collector (T2' base) voltage up to 1.4V to keep about 0.7 V at its base. This is how we see the brilliant Widlar's idea here.

In this way, we continue to look for new points of view...

What's a step by step way of thinking about the flow of electrons in such a circuit?

For the purpose of intuitively understanding circuits, you need a most general idea of ​​electric current as something that flows under the influence of something like pressure... and encounters something like obstacle along the way. And what is extremely important (but underestimated) is WHERE the current flows. 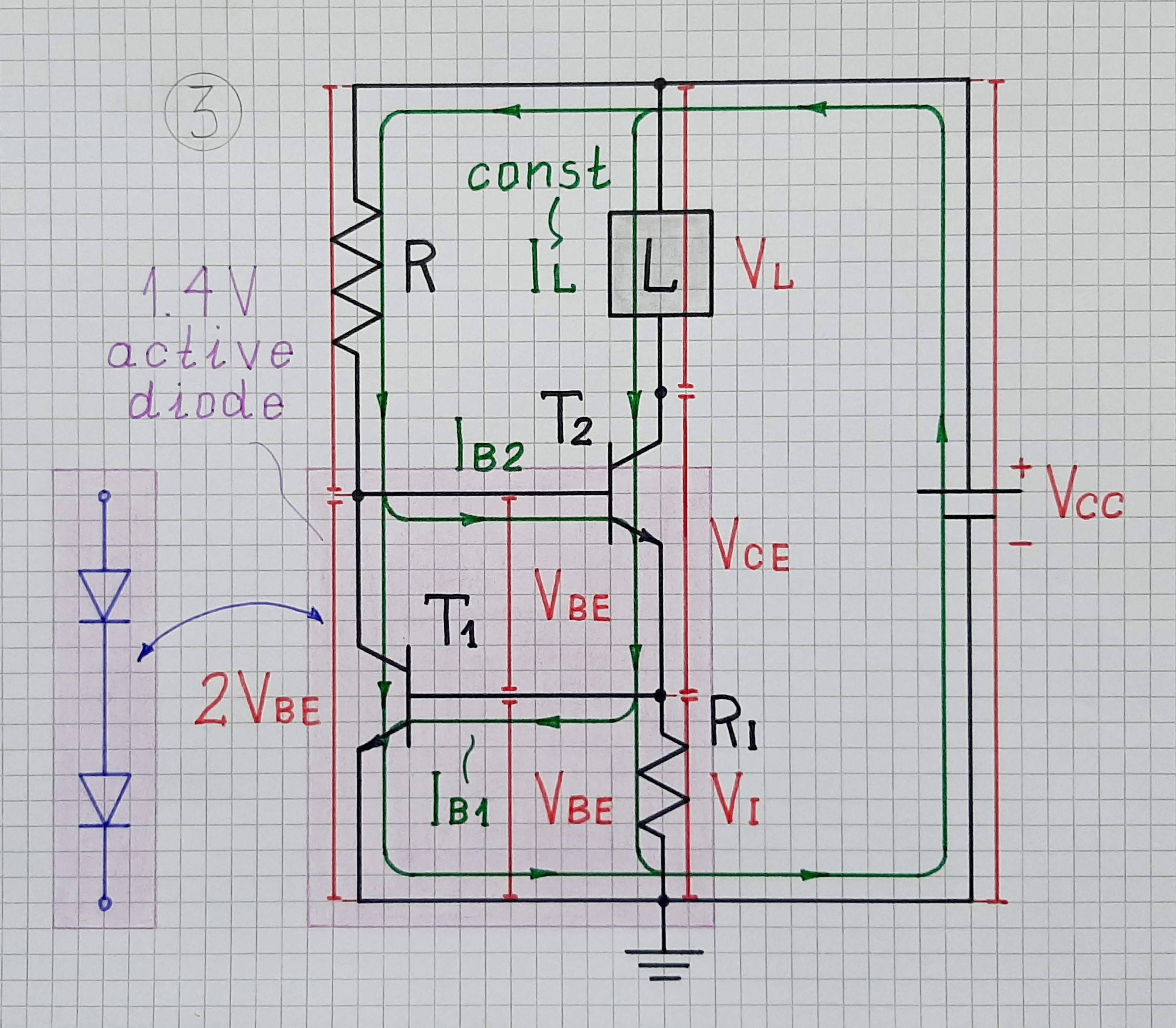 I understand very well that for you this is a difficult way to understand such a "simple" circuit of only two resistors and two transistors... simply because it requires a lot of previous experience. But I wanted to show you what true understanding means and how different it is from the literal "reading" of circuit diagrams. I hope this will stimulate you in the future to strive for true understanding...

Here are some of my resources about the circuit philosophy:

How to understand, present and invent electronic circuits (Flash content, needs a Ruffle extension to the browser)

Circuit stories on the whiteboard

Circuit stories is my blog

What's a step by step way of thinking about the flow of electrons?

Here's the crucial difference between hardware and software. Software deals with algorithms, which are sequences of simple steps necessary to implement more complex functions. Those functions can in turn be combined into even more complex sequences, eventually implementing the desired functionality. That's why "step by step" analysis works so well for software.

In electronics, every part of the circuit can be represented by a transfer function. However, those functions are to be considered simultaneously, not as a sequence. You cannot say that a resistor transforms voltage into current, and then a BJT takes that as a base current and amplifies it by a certain gain. In fact, the change in the BJT base current will change the voltage on the resistor, which in turn will affect the base current, etc.

One way to think about a circuit is the transient analysis. You start with zero currents everywhere, and then figure out which paths in the circuit will be able to conduct. Now you imagine some small currents are flowing in those paths, and figure out how that would affect the voltages, and then recalculate the currents given the updated voltages, etc. That's essentially what Transistor did in his answer.

Another way which works for some circuits (including the one you have) is the DC analysis. You start with the assumption that all currents and voltages in the circuit are constant, and then find out what the values would be by solving the equations.

Finally, for a certain class of circuits (such as filters) it is helpful to understand how the circuit works at different frequencies: that's the AC analysis.

Getting a SPICE simulator and looking at the transient analysis results often gives you a good idea of how the circuit works. It tells you what happens to all currents and voltages over time, and you just have to figure out why the circuit is made to behave in this way.

There are generally 2 uses for (BJT) transistors:

Without knowing the specific voltages and characteristics of the transistors, the use case must be determined from context. Here, switches makes little sense, so we must be dealing with amplifiers--more current into the base (caused by increasing base voltage) allows more current through the collector-emitter (CE) pair. Note that these transistors are NPNs. PNPs, which have a slightly different symbol, allow more current through the CE ports only as you decrease base voltage.

The first thing to note is that the node above T1 (node 1) is floating, so if T1 is completely off, it will rise up to +V. The node under T2 (node 2) is attached to gnd when T2 is off. When T2 is turned on from the rise in node 1 voltage (i.e. its base voltage), it will let current through, rising the voltage in node 2 and turning on T1. If it fully turns on T1, then node 1 is (approximately) grounded, turning T2 off, thus turning T1 off, and restarting this cycle.

Since the transistors are acting as amplifiers, we get this in-between action where T1 and T2 aren't turning completely on and off but are only slightly increasing and decreasing in base voltage, balanced against one another and thereby achieving a constant current.

To analyze this circuit quantitatively, we start by assuming that base-emitter voltage (\$v_{BE}\$) for a silicon BJT is typically about constant, at around 0.7V (the exact \$v_{BE}\$ is given in its specs). So the current through R (to get the base voltage of T1) must be \$0.7/R\$ by Ohm's law. In a FET, no current goes through the "base" (i.e. gate), so if T1 and T2 were FETs then we would be done; the emitter and collector (i.e. src/drain) currents would be the same. But since T1 and T2 are BJTs, some of the current at node 1 goes through T2 and gets added to the diode current to get you the current through R and some current at node 2 gets diverted through the base of T1 and thus subtracted from the current through R: for a BJT, \$i_{emitter} = i_{collector} + i_{base}\$.

My answer is - more or less - a comment which can help to explain the basic working principle of the circuit.

In analog electronics there are circuits which can be explained in two different ways. This applies, for example, to harmonic oscillators (negative-resistance view, frequency-selective feedback view) or - as in this case - for circuits with active feedback.

Because the given circuit needs no input signal we have no criterion to define the main amplifier and the feedback path. Hence, two views are possible:

1.) T1 is the main amplifier in common-emitter configuration. The bias point of T1 is provided and stabilized by active negative feedback (back to the base of T1),

2.) T2 is the main amplifier (working as an emitter follower) having a bias point provided and stabilized by by active negative feedback (back to the base of T2).

Stabilization: The circuit is very insensitive to temperature variations because both transistors (when mounted in close contact) can react similarly upon temperatue changes. That means: In both cases, the transistor in the feedback loop increases the (normal, passive) feedback effect provided by the resistor in the fedback loop.

I'm sure those others were very good and helpful answers. I'm of the opinion that intuitive understanding leads to short and simple explanations. I'll try here to put in a nutshell my thoughts as I looked at your schematic.

In your circuit, R across T1 base and emitter makes a constant current source. 0.7 v across 70 ohms gives 10 milliamps. About 10 mA flows through the LED.

The LED needs some specific voltage to conduct 10 mA. Check its datasheet for that value. Check how brightly 10 mA will drive that LED.

T2 Vce is what's left over from V+ to light the LED and drive two Vbe drops. The 2.2k R sets forward bias on T2 and limits T1 Ic. Check that it's a reasonable value for V+. Check that T2 can handle that Vce.

To wrap up, your circuit drives an LED at 10 milliamps for V+ between 5V to 15V or so. That's short and simple without being overly simplistic. I hope.

Not the answer you're looking for? Browse other questions tagged transistors led current-source constant-current negative-feedback or ask your own question.

10
How to calculate the tolerance of this constant current circuit?
1
How to read a schematic with capacitors
2
What is the idea behind the ingenious Widlar current limiter?

7
Voltage regulator for linear constant-current (1.5A) LED driver?
0
Driving an LED with a low amplitude square wave as an input of MOSFET switch
5
Low Overhead Constant Current LED Driver
4
maximum reverse voltage applied to a resistor-LED configuration
0
load-resistor value limitation for current mirror
0
How to implement constant current LED driver for WS2811?
0
Choosing the right resistor for a LED circuit
1
Hi! I would like to connect my LED lights (Vaxmyra from IKEA) designed for 24V system into my 12V system, do I need a current limiting resistor?
4
What does the collector resistor on this LED driver circuit do?