Adding a waveform on top of an LED driver signal

My Background: I have a basic understanding of electronics from undergraduate physics courses and a few high-level digital electronics courses, but basically zero knowledge of anything analog/actually building circuits. The term "coupling capacitor" was new for me not too long ago, if that helps give some perspective.

I recently saw this video and I thought it was super cool. I want to create my own version of it and instead of using an MP3 player, I'd like to use a waveform generator (specifically the AD9833) so that I can better control the light/sound emitted from several LEDs (an array 16 RGB LEDS to be exact) with an Arduino Nano. I'm assuming I can't just connect the output of the waveform generator in parallel with an LED driver (see below schematic) like the guy does with the MP3 player and battery... but I'm not really sure what I'd use instead to accomplish this.

I'm making my question a bit more specific. I was imagining doing something like in the below schematic.

Would a summing amplifier work for this purpose? From the TI schematic, the driver tries to maintain a set current rather than a set voltage (if I've understood it correctly). Would I be safe connecting the circuit up like so?

I reread the TI schematic and it seems like the LED Driver is open-drain (please correct me if I'm mistaken). Also, I found out that Op-Amps sort of separate the inputs from the outputs (very little current flows) if there's no connection between the terminals, so it would seem the LED driver would be problematic in the above schematic where it is. My next idea is to add the signal to a 5V supply that would be the main power for the LEDs. What do you guys think? 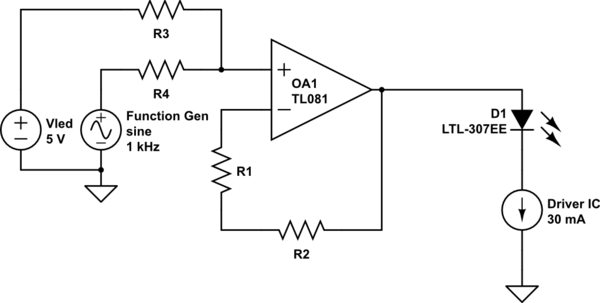 In response to @Tony Stewart Sunnyskyguy EE75's comment about specs: I'm hoping to use RGB LEDs similar to these. For simplicity, I'd like to design something for only the red component. It has an average forward voltage of 1.9 to a max of 2.5V. The signal I'd like to superimpose on the 5V supply would ideally be within human hearing range (20Hz-20kHz), but I can live with a smaller range if I have to. The amplitude would be limited by the waveform generator (AD9833) which on the spec sheet says 0.038V to .65V. I'm not really sure how to give a spec on noise (is it just an SNR?). I built a circuit similar to the one in the video using an lm386, a solar panel and an LED. I strobed the LED with a couple note frequencies (440Hz for an A, etc) and in a dark room it sounded pretty clear. I'm not sure I fully understand what I read here, but it seems like op-amp noise frequencies only appear at high frequencies (MHz range), where a person's ear won't really be able to hear it. My target SNR would be something around 30dB, I'm not overly concerned with a little distortion as the goal is to create an instrument.

Your choice of common-cathode red-green-blue LEDs means that an analog LED driver should drive LED current into the open LED anode. The common LED cathode would go to 0V (GND).
But most signal sources provide output relative to ground. This makes driving a cathode-grounded LED with current a bit more complex. Your AD9833 signal source is of this type. Many microphones are too.

Your LED suggests maximum current of 30mA. This means that with no AC signal, it should idle at half-current, at 15mA. Then it can swing down toward zero mA, and up toward 30mA with signal current. The LED would appear constantly bright, because your eye cannot see rapid signal swings at frequencies above 30 Hz. Average current remains at about 15 mA.

An analog driver, driving a cathode-grounded LED might look like the two-transistor circuit (below). Resistor bias is chosen so that most any LED would have roughly 15mA flowing with no input signal, provided the DC supply voltage is +5V. Input voltage to C1 would be about 0.65V peak-to-peak AC signal. 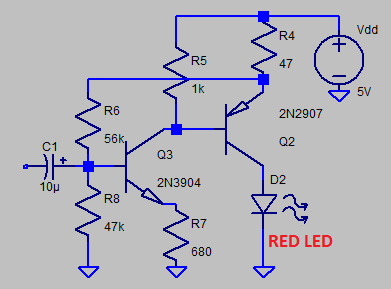 Driving common-cathode LED array is simpler with a PWM signal source. You only have to calculate LED current for two cases:

A transistor saturated switch toggles between these two cases, driven from a digital signal source. An Arduino with a Vdd supply of +5V would toggle a digital output pin between two voltages: 0V & +5V. This signal would drive a switching transistor ON or OFF.
Current from the Arduino pin is small (1.4 mA), limited by a resistor (R1, below). Another resistor (R2) is chosen to limit LED current to 30 mA, from a +5v DC supply. The transistor has ample current gain and is actually over-driven so that it acts as an ON/OFF switch. Note that the 30 mA current through transistor and LED does not flow from the microcontroller, but does flow back to the +5V supply. Many PWM outputs could drive such a switch before microcontroller current limits are exceeded.

Converting an analog waveform input to PWM signal is done with software inside Arduino, which uses its analog-to-digital converter (ADC) to provide to its PWM module a digital input. The PWM module would be set for a frequency above the audio range for your application (above 20 kHz).
Most of these microcontroller ADCs use +Vdd as a reference voltage, so that input signal ranging between 0 -to- +5V gives an output value between 0 -to- 256 for an 8-bit ADC, for example.
A program might read ADC 20,000 times per second, convert this number to a range compatible with PWM range, and write to the PWM duty cycle register.

simulate this circuit The MOSfet would be selected from data sheet to have less than about one ohm \$RDS_{on}\$. A "logic level" MOSfet would be preferred, especially if the microcontroller was run at a supply voltage lower than +5V. The MOSfet should not run hot with only 90mA being switched on/off.

Since the switched 90mA current is reasonably high, a DC supply bypass capacitor should be placed near the resistor common point, and MOSfet source (which is grounded). This should reduce radiated EMI interference.

When you drive multiple LEDs with ONE PWM switch like this, each LED is modulated with the SAME PWM signal. If you want each LED to have individually-controlled modulation, each LED would require its own PWM channel, and its own MOSfet. Some microcontrollers have multiple PWMs on board.

Not the answer you're looking for? Browse other questions tagged operational-amplifier led signal sound or ask your own question.