My problem: I've reproduced the 555 timer circuit from here: https://www.gadgetronicx.com/door-open-alarm-ic-555/.

Because of the specifics of my application I'd like the signal at the speaker to be delayed by 60 seconds. To clarify:

Would be nice if someone could give me an easy and concrete tip. I'm a bloody beginner in electronics but I'd imagine there is some easy solution with a capacitor at the output pin of the 555. Thank you in advance! 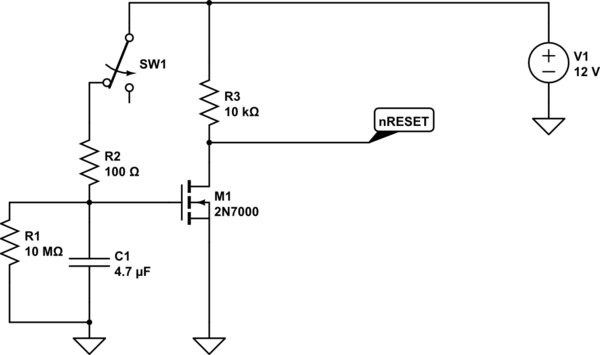 Use a CD4060 ripple counter instead. It will be much more reliable since it doesn’t require the need for such a large RC network to set a delay. It’s a popular solution for making timers. Bonus: use one of the low-order bits to make your alarm sound (add one AND) gate. Much simpler.

The 555 timer is not particularly popular around these parts, partly because you only use the 555 for one thing at a time, most residents can select a better chip for almost any purpose. Among those better chips there aren't many that can do more than one or two of the 555s functions. That's what 555s are good for. They are just a block containing a few prewired resistors, comparators, a latch, a discharge switch and an output buffer. The relative simplicity gives it broad functionality and makes it comparatively easier to understand. Broad functionality means if you haven't spent a mint on parts yet, there are a lot of spaces in a breadboard you can fill and start experimenting with while you wait for your flip flops or RS latches or fancy timer or LED driver to come in the mail.

Building your first buck converter? 555 will work fine to drive PWM up to around 150kHz (Modern 555s can go way above this, but you'd need a better oscilloscope than mine to see where problems appear). Want to upgrade it to a voltage controlled converter? Use the analog side as a triangle wave generator and a comparator. Want to make it auto adjust for variable load? One more comparator/op amp. You've learned how to do it the easy way and you want a better triangle wave? Switch the 555 to 50% duty cycle and connect the output to an op amp integrator circuit. Want to do your own high power PWM RGB LED fader? 7 555s and some comparators. Want a timer or oscillator on a 12V system without having to bother with a logic voltage? Want a through hole chip for easy soldering or socket replacement (At the lowish frequencies the 555 is usually used at sockets aren't a big signalling problem) or just to stick in a breadboard without having to presolder it to a little board?

For a person just learning about electronics, a lot of these other chips bring extra challenges along with their improved properties or advantages that don't aid in learning the basics. Need more timing precision? You probably want a digital timer with a quartz oscillator. Now you need to learn about high speed digital layout and quartz oscillator circuits.

Need higher operating frequency? Well newer through hole 555s can work up to 3 MHz, which is well into challenging signal territory, so if it can go higher than a 555, you're going to probably need to learn about high speed layout, ground plane separation, and rely a lot on manufacturer supplied board layout. For my purposes it's much harder to learn anything from a signal my cheap oscilloscope can't see, so a 555 is more than adequate for now.

Need something more compact? Just for example, a 555 Cuk converter circuit I built from 555s and comparators took up about 5 square inches and used decently bulky 1/2" inductors and capacitors. A modern high frequency Cuk controller chip is just 1 surface mount chip and operates at MHz frequencies. The same power level could be fit in about 2 square inches. Highish operating frequency helps the converter respond quickly to load surges and decreases inductor and capacitor size. You can get features like an enable pin for low power modes and automatic overcurrent shutoff. All around you get a better result, no doubt, but you end up either having to use manufacture references to build a circuit you don't really understand, or grinding through a bunch of mid and advanced level challenges in addition to the basics you should be focusing on.

Since you already have some 555s though (It's worth acquiring nice ones, they're still very cheap), I'll mention that your annoying sound is produced with the 555 astable multivibrator circuit (Oscillator), and because you need roughly one minute delay, you can easily produce your delay with a 555 monostable multivibrator circuit (One shot timer).

If you're trying to learn about circuits and actually build circuits in an order that lets you understand them fully and easily, 555 timers are great for their versatility and they are extremely well documented, often in ways I found easier to understand as a beginner, which makes sense since an expert would always select the best chip for the job, which isn't usually the 555.

Anyway, the 555 monostable circuit just generates a pulse, so you can look it up on Wikipedia and use the easy formulas there if you want to figure out how big resistor and capacitor are required for a 1 minute pulse. For a long pulse you want to maximize resistance so you can minimize capacitance and wasted power. With newish 555s you can use resistance well into the M\$\Omega\$. Then you just need to figure out how to detect the end of the 1 minute pulse (negative edge detector circuit) and latch ON (You can use another 555 as an RS flip flop for the latching) the 555 astable noisemaker circuit. Reset the latch to silence the alarm.

Not the answer you're looking for? Browse other questions tagged 555 delay hobbyist or ask your own question.

2
Delay then off for tone signal
15
Transistor Delay
1
Latching circuit that delays the on state for different outputs
4
555 timer one-shot 30 second light LED strip, TOTALLY CONFUSED!
0
Improve a simple “magnetic alarm” with a timer, to extend the ringing time
0
555 auto-off timer circuit validity
0
How to turn off 555 Timer for a period of time after Vout signal passes through
1
Alarm circuit should be improved