How to find unknowns when there are current dependent sources? 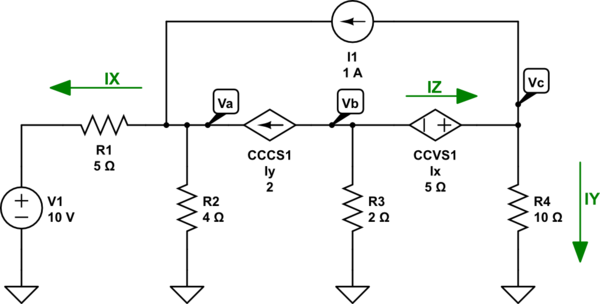 You can substitute and reduce the number of equations, if you want. Or you can just solve for all six variables, simultaneously. It's up to you.

In standard KCL form, the above are:

See below for a discussion about how I formulate the equations:

The KCL equations may appear to treat node voltages as if they don't have to be differences, but can be absolute values. However, that's not really the case here. In fact, I'm just using superposition (which is easily seen once you've really had the concepts deepened into you.) This is, in fact, the same technique used within Spice programs (those where I've directly looked over the code used to generate these.)

1
Through node analysis, how do i find the unknown?
0
Thevenin Equivalent With complex sources