I'm just trying to get my head around the above question. It doesn't seem to follow Ohm's law. Could someone please explain what I am missing in this?

Below is a chart I found of the changing resistance of a lead acid battery compared to state of charge, however, the charge acceptance is higher when it is discharged compared to when it is charged. How does this happen with a higher resistance that gradually gets lower?

I'm also assuming a constant charging voltage from an alternator. 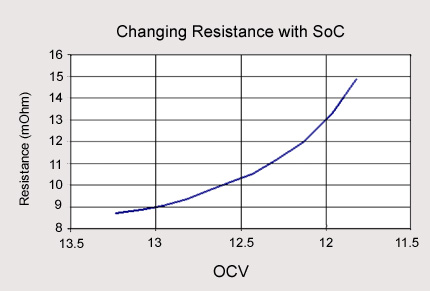 Not everything has to follow Ohm's law because not everything is a resistor. A battery is not a resistor. It is a battery. A typical beginner mistake when they first learn Ohm's Law is that they think everything follows Ohm's Law. I don't know why since it is clearly taught that Ohm's Law is for resistors, but I guess when the only tool you have is a hammer, everything looks like a nail.

Just consider the picture in your question and put some numbers on things: - 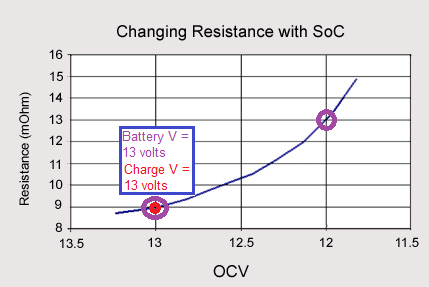 If the SoC implies the battery OCV is at 13 volts AND the charge voltage is 13 volts then no matter how you work-it, the current into the battery is going to be approximately zero.

In other words, using your graph, for a given fixed charging voltage, if the SoC is low, you get more charge current.

A lead-acid battery like all batteries has memory. (Some more than others) It is due to a double layer capacitance effect and often called something else. When you examine SoC voltages there is a difference of about 1/2V between the OCV and the voltage after some load is applied, so the resting voltage after this load for a Full range SoC is from 12.6 to 11.5. Yet the charging voltage from alternators is 14.2V. In regions where batteries rest at high temperatures, lead plates tend to get sulphated which increases the ESR of the battery and requires either pulse charging over DC or 14.5V which is often seen on some vehicles to agitate the plates enough to reduce the lead sulphate buildup. This is a tradeoff between plate corrosion and acid boiling from overcharge and plate oxidation from undercharging or over temperature.

Thus (if you) examine charge current from a CV alternator when discharged to a low state, you may experience a lower than maximum charge current until the battery has enough heat or charge level to lower the ESR then the current will rise to maximum and start reducing as the charge builds up. This rise to peak might only occur on dead batteries after say after an interior light was left on all night and day.

The CA @ 0'C & CCA @ 0'F ratings for a battery only apply when new and fully charged. Typically battery manufacturers specify ratings at freezing temp for water where the maximum current it can supply for 30 s allowing a maximum voltage drop to 7.5V. This translates to either a 5.5 V drop from OCV or a 5V drop from preloaded (e.g. <1A for 1 minute) for a battery typ with 50Ah capacity at 100 % SOC.

Thus a 500 CCA battery dropping 5V has an ESR of 10m Ohms. And a 1000 CCA battery has an ESR of 5 mOhms. This is partially due to the plate temperature rising above freezing and reducing the ESR after 30 seconds of perhaps 500A* 5V = 2500 W of self-heating and potential acid boiling. yet a dead battery barely able to turn on the headlights might only be supplying 3A* 5V drop = 15W with an ESR of 1667 mohms (hypothetical example)

Sometimes in between these examples, you may have experienced in winter as I have in Winnipeg(Winterpeg) that on rare occasions an almost dead battery will “come back to life” just enough to start the vehicle. My belief is it is the self-healing that reduces the ESR to make the battery produce more current with less internal ESR voltage drop.

All these variables are pretty dynamic and affect the SOC, expected lifespan etc. and especially reduce MTBF is from deep discharging a normal lead-acid battery for too many hours. (Some cars in Arizona have a battery life of ~1 yr from high temps under the hood)

Desulphating by high pulse charges can restore 2/3 of so-called dead batteries according to an acquaintance in the Caribbean who designed an automated reclamation tester with 200A pulse capability, but this was for batteries that did not sit for more than a year. The longer it remains undercharged, the faster it insulates the plates the lower probability of restoring it) The same is true for most rechargeable batteries except ceramic plate and deep cycle batteries are designed to withstand better.

Normally acid s.g., specific gravity is the best indicator of, SOC and apparently also ESR from sulphation. I used to be Mfg Eng Mgr at C-MAC in Winnipeg where SOLARTECH units were made for truck and motive power batteries that used <50ns pulses >10A > 25 kHz only when the battery voltage was > 13.2V I I.e. when the car was running, as it drew an average of only 5W to desulphate the batteries as prevention. Generally, series connections cells are perfectly balanced in batteries when new then, only 1 cell degrades 1st as it has the weakest capacitance and thus overcharges and undercharges the fastest causing a runaway condition of rapid cell death. (Same is true for LiPo and Li-Ion) in Days or months instead of years. I tested Doug Eryou’s Solartech product on a 50k$ motive power battery for airplane tractors at the airport with a DSO and s.g. Tester and after a week of testing a battery that was performing poorly with a full charge had all “like new” s.g. readings that rose to become well-balanced and high acidic levels of a normal battery while left on float charge with the SOLARTECH box over the battery. It works! The customer was happy with the results and bought many. 1 for each battery. ( but it also interferes with trucker driver’ AM radio signals (like old copper spark plug wires did) on long hauls between cities ;) it also worked on NiCad and other batteries which were of great interest to the US military and Truck/tractor dealers.

Not the answer you're looking for? Browse other questions tagged current battery-charging resistance alternator state-of-charge or ask your own question.