Are these inductors or resistors and what function do they serve?

Some context: I'm trying to learn about ways to reduce EMI's effects on microcontrollers. I've got a Telemecanique logic module and decided to open it up to investigate.

I found myself with these: 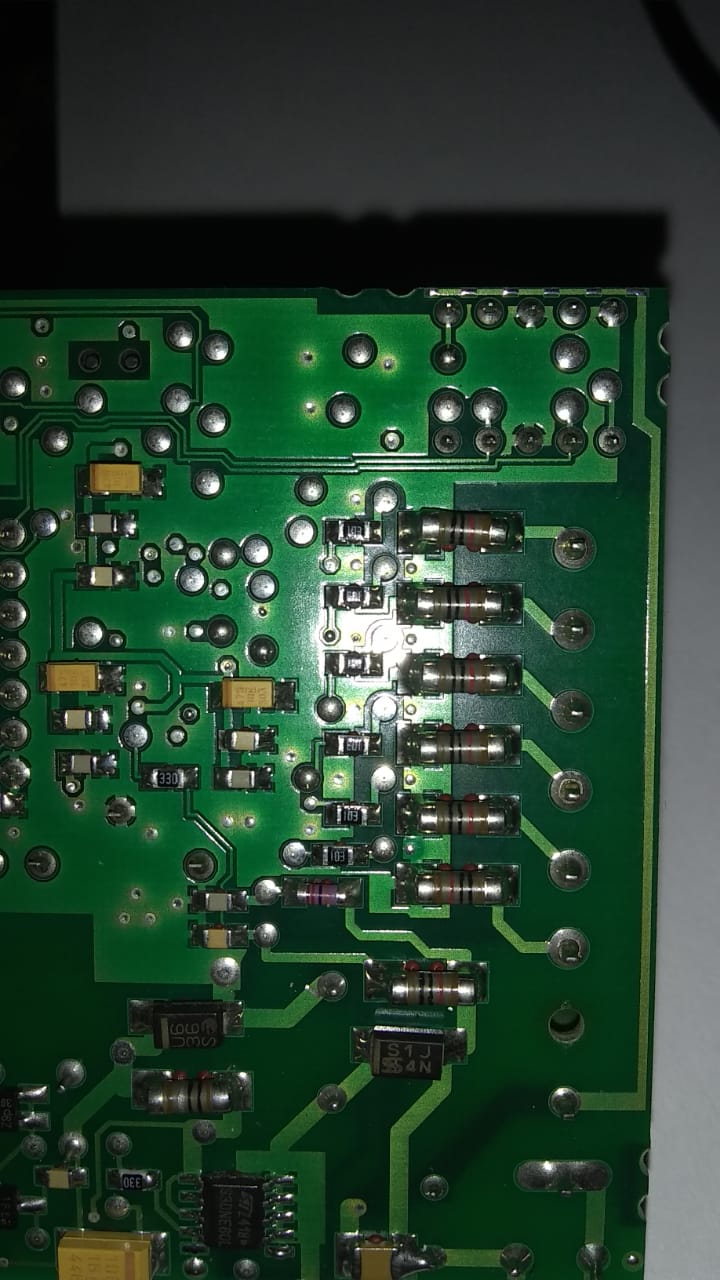 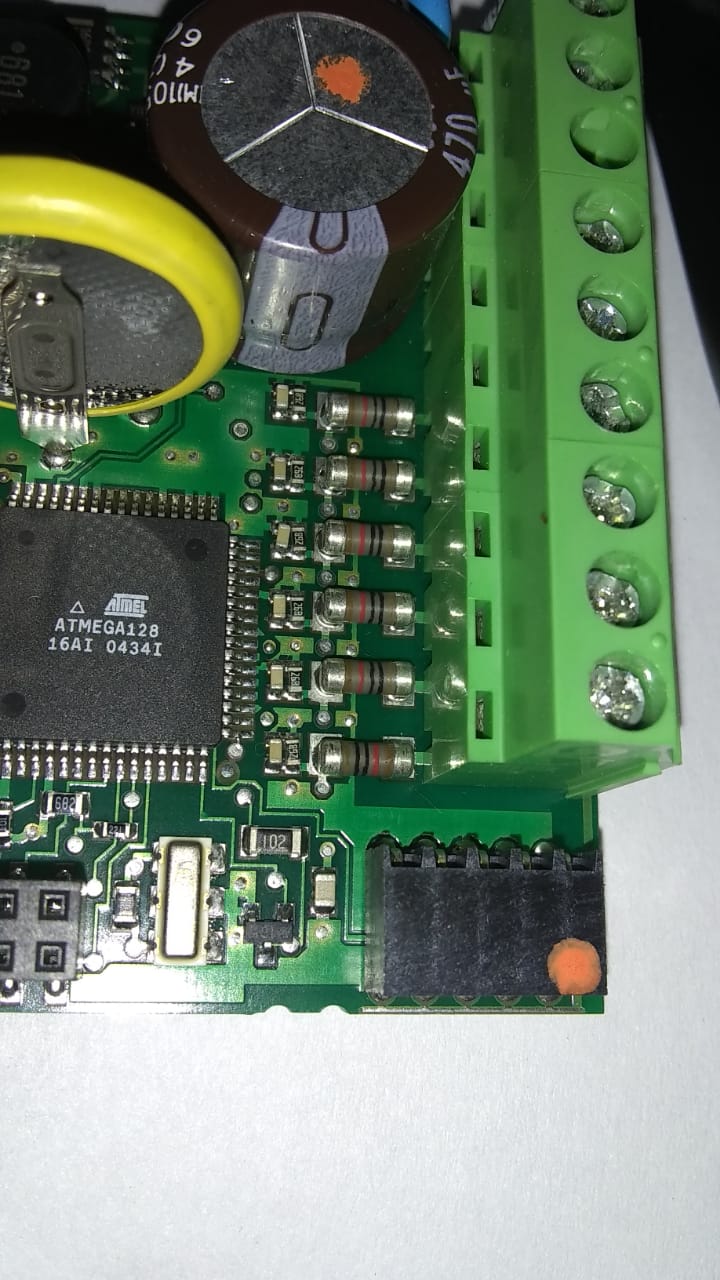 Are those inductors or resistors rated for higher power consuption? When I measure them with the multimeter they turn up 5.6kOhm, but that's with them soldered to the board so the measurement is not very useful. they're paired with SMD capacitors and resistors.

They are in series with the input terminals.

What function do they serve?

These look like MELF package resistors as others have said.

It's hard to tell the exact colour of the rings from the photos. To me they all appear to have five coloured rings, brown black black red (slightly wider gap) brown, although some are fitted "back to front". This would make them 10K with 1% tolerance. Other evidence supports this:

Note that some of the other components (like the small surface mount resistors next to these) don't have their orientation controlled either. Uncontrolled orientation seems a far more likely explanation than that there are two different values used here that just happen to have the same band colours but in reverse.

When measuring these in place on the board you are measuring the resistance in parallel with "something". As you measure 5.6K, these resistors must be larger than 5.6K. They can't be 10 or 12 ohms as stated in another answer, or 120 ohms (which is what they would be if I got the band colours right but the direction wrong i.e. brown red black black brown).

These are also unlikely to be 12K as stated in another answer. 12K would read brown red black red X or brown red orange X.

Finally, these are unlikely to be inductors if you are reading a resistance across them as high as 5.6K - you might see a few ohms from a small inductor but not kilo-ohms.

Following the tracks in the photos, I think this is the circuit diagram for the input. The mystery components are the two resistors at the left, R1 and R2.

I think these resistors are designed to handle voltage spikes in the input signal. MELF packages can usually handle about 1W of power and are usually good with short surges above that. A 10K resistor with 100V across it will dissipate about 1W. These are probably capable of handling short spikes up to 200V or so.

This will be why the MELFs were chosen instead of using the same ceramic 10K resistors used elsewhere on the board (marked 103) which can usually only handle about a tenth to a quarter of a watt.

A high voltage spike at the input will take two routes. Half the current will go through R1 to ground. The other half will go through R2 and start charging up the capacitor C1. The values will have been chosen so that even the longest spike expected won't be able to charge C1 to higher than about 5V which is the maximum the ATMEGA128 can handle.

It's hard to see exactly what value R3 has (they're the little black ceramic resistors between the MELFs on the top side and the little brown capacitors) but it will be there to set a maximum frequency that can pass through this input filter i.e. to cut out high frequency noise in the input signal.

R4 is just to limit the maximum current that can flow into the microcontroller in the event a spike changes the voltage at C1 quickly.

I think they're 12K MELF resistors. So there's a 12K pull-down or pull-up, and a series 12K resistor to an input divider or something like that. The divider resistor appears to be 1.82K which would give about 3.2V for 24V in.

The choice of MELF resistors is probably related to power and voltage withstand under extreme EMI or fault conditions.

Try to trace out the circuit with a multimeter. Knowing the MCU supply voltage and the input voltage range is also useful.

On the lower photo...

As I indicated in comments this is for partial impedance matching low Ron 25~33 to reducing ringing for some unknown load and lower BEMF for flyback protection or just stock items.

Upper Photo is similar but all 10 Ohm 2%

When driving relay interface cable with parasitic and cable capacitance the Q of ringing depends on the X(L)/R ratio at some resonant frequency due to C with a decay time of L/(Ron+Rs), so I expect this to reduce ringing in the relay driver interface and EMI yet still be able to drive a >100 load at 3/4 Vdd.

The choice between 10 and 12 Ohms is curious however.

Some Chinese factories have crazy resistor colour codes , so double checking by Ohm meter is advised.

Like a zero Ohm resistor with a 2% tolerance (?) BK BK BK RED 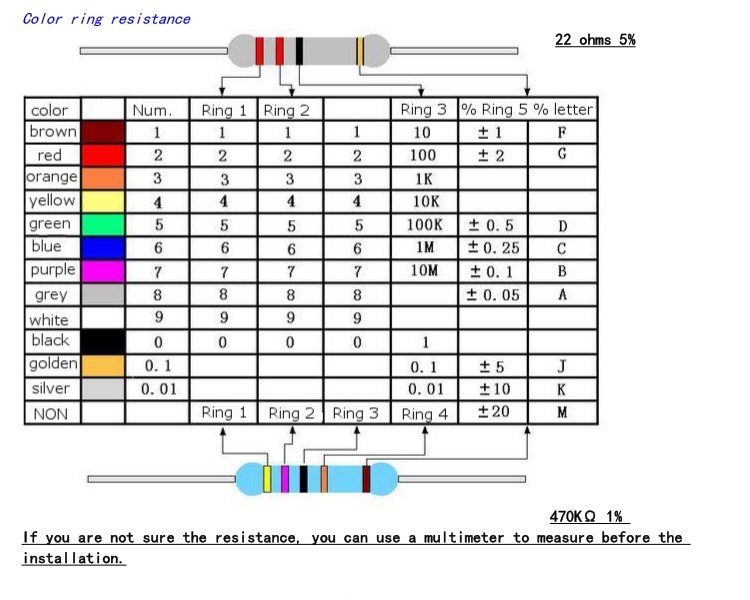 Not the answer you're looking for? Browse other questions tagged identification components emi-filtering or ask your own question.