I have a circuit that will simulate a device.

The device in question normally communicates by adding/removing resistance from a generated signal, the source of the signal will then measure the voltage difference and interpret that as a message.

In order to simulate it, I need to be able to route the incoming analog signal (1kHz square wave, V1 in below schematic) to different points in the circuit or make it NC. I tried looking for multiplexers, but those I found weren't able to pass the analog signal through. I couldn't find any single-pole triple-throw relays anywhere.

What type of component can I use in place of U1 below to achieve this behavior? 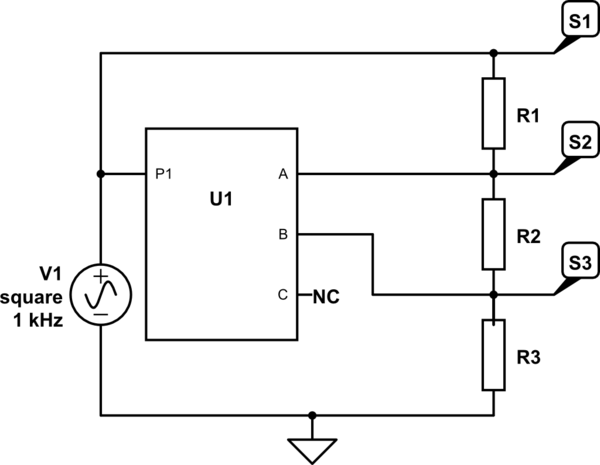 V1 is a PWM signal with a +/- 12V amplitude. It's a control signal which won't be carrying a lot of current (maximum 5nA). I would like to be able to control U1 with a 5V control signal (an arduino or something to that effect)

This is what the "mechanical" counterpart would be: 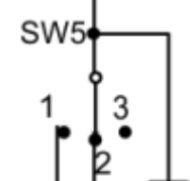 There are many 4:1 analog mux parts that will meet your requirement, in both the CD4xxx series and DGxxx series. Analog Devices, Vishay, TI, etc.

There are two addressing options:

The CD4066 has multiple, independent switches, and any of them can be on/off in any combination because there is one enable input per switch with no internal decoding. Three possible output states require three address lines.

The CD4052 has an address decoder and two sections, each with 4 switches. The switches are mutually exclusive - only one can be on at a time (per 4:1 section). Three output states require two address lines .

You used maybe a digital multiplexer? If the switch resistance isn't excessively critical you could use an analog multiplexer, like the classic 4052 or some discrete analog switch like the 4066.

If switch resistance is critical there are more refined analog multiplexers, manufacturer specific (like the ADGs or the TMUxs). In alternative, given the topology you could use MOSFETs to shunt part of the resistor cascade to ground, it's quite simple.

However the missing part is the voltage range of the signal and the currents involved. Analog switches are only good up to the supply voltage and up to about 10mA (details differs depending on the actual part). Shunt MOSFETs have no such issues, just use a MOSFET beefy enough.

In alternative just use a relay array and drive one relay at a time depending on the need. In absolute the most versatile even if somewhat expensive. Sometime however a relay can cost less than a MOSFET and associated circuitry and solve the problem.

As the others have mentioned an analog 3 pole switch is easy to implement from low ohms to 300 Ohms (4016) but this may be too high for your spec (TBD).

Apply a source or current sink load to reach this condition * above and measure the current at the threshold using some ramp much greater than the slew rate.

For all switched drivers and analog signals which these are, whether they are CE, CC or Complementary CMOS, or an Op Amp with negative feedback, there exists a Vol/Iol=Rol and similar for Roh and analog voltages in the linear range.

There are many ways to measure this including impedance spectrometry with a Spectrum Analyzer or a Network Analyzer or an RLC analyzer. For RF ingress, they use a test called Transfer Impedance testing on coax which is not the same as the characteristic impedance but a measure of the braid efficacy for shielding.

What works best for you depends on your TBD specs and tools available to you.

It looks like I was thinking about it in the wrong way.

I can achieve the result of the 3-pole switch by using a programmable resistor (digital potentiometer) and possibly a relay for the Not-connect state.

Not the answer you're looking for? Browse other questions tagged switches analog relay or ask your own question.

2
Looking for device that help me split a n bit input bus, or n analog lines into two or more bus at output
1
Triple pole triple throw relay
1
Is there something like a Single Pole Quad Throw Relay?
1
Analog Switch IC controlled with logic input
1
Fast analog switch overshoot
1
Analog 3-state buffer where the input voltage equals the output voltage and is controlled by a digital control line
0
Sending serial data over analog TV coaxial cable (RF-band)
0
How do I connect a 0-10V analog input to MCU with high input impedance?