I'm doing a project in which I want to turn on an LED with different instensity depending on the input of a sensor. For now, I'm simulating the sensor with a potentiometer.

I'm using an EK-TM4C123GXl launchpad. I connect the 'fake' sensor input to an ADC input (through an op. amp.), then I vary the PWM pulse width depending on the value read from ADC.

I have tested that the PWM output powers the LED and varies its lightness depending on the current pulse width, having the ADC input is disconnected. However, as soon as I connect the ADC input, the PWM output goes to 0V (just after generating a 'spike' in the LED, I can see it because it brights a lot for an instant).

I have 'solved' the problem by placing a resistor between the PWM output and the LED. However, I don't understand at all why this happens. I have though that the PWM pulse is finding a way to ground through the MCU internals and the ADC input, I still don't see how can a resistor (R5) fix that.

The schematics is below (VCC is a 9V battery):

Previous schematics was wrong, here is the correct one: 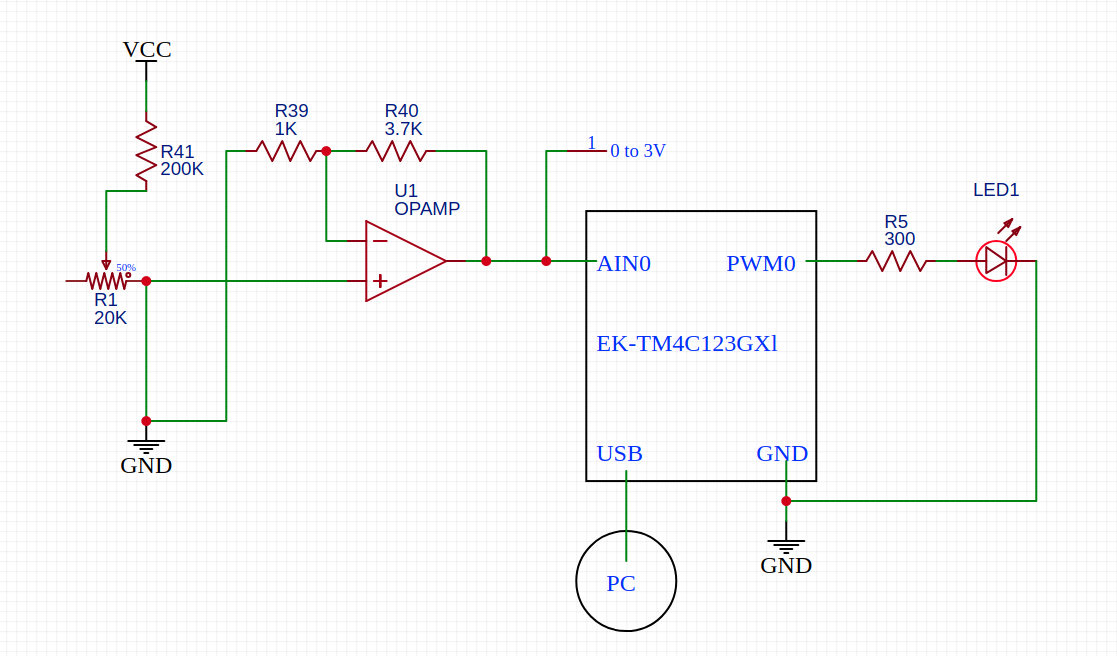 The resistor R5 is the one that prevents the PWM output to go ground, that is, if I remove it and connect the LED directly to PWM0 it remains off and its anode at 0V.

How can this be happening? Can this be related with the input leakage current? 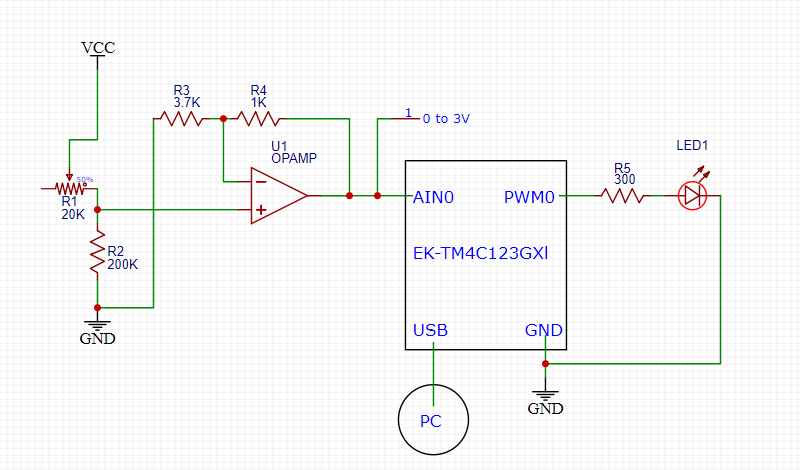 I have read that the LED should always by protected by a current-limiting resistor. ... but the point is I want to know how can the absence of R5 can cause PWM0 to go to 0V.

If you don't add R5 the PWM output will be overloaded. The voltage will max out at about the rated forward voltage, Vf, of the LED and at the maximum current that the microcontroller can give. This is neither good for the micro or the LED. Use a current limiting resistor.

Measure the current that the led draws without the R5 (with and without AINT0 connected). That's what I would do, if I were you, check what really is going on there,.

Where did you see this 2mA limit? I could not see it in the datasheet, its also pretty big datasheet, it could take me some time

My guess: When the EK-TM4C123GXl gives 5V (pwm or not) to the led, if you do not have the R5 connected there, this 5V output will be a short to GND.

Additionally, depending on if you aren't concerned about cost, you can always add a buffer to help maintain signal integrity, this should protect the PWM from potentially being pulled to ground if its being attenuated significantly.

I have done some more tests. Specifically, I have tested the circuit without R5 and powering the MCU through its VBUS pin, with 3.3V. All works.

I still can get overcurrent to the LED if I turn the rheostat all to the right (10mA while the maximum ratings for the LED specifies 7mA).

In summary, the whole problem came from powering part of the circuit (sensor, op. amp.) with a 9V battery while powering the MCU with the PC USB. I have no idea how can this affect the PWM output though.

Not the answer you're looking for? Browse other questions tagged microcontroller circuit-design adc pwm circuit-protection or ask your own question.

2
Reversing a .5-4.5V analog sensor output to 5V-0V
2
Why does output voltage increase when pwm input frequency to output enable increase?
4
MCU - What's going to happen if I put a PWM output pin right next to a bunch of ADC input pins?
1
output of pwm/ speed controller with input from voltage stabilizer
1
How to simulate analogue output sensor with MCP3008 ADC. Can I use a 10K potentiometer with Raspberry Pi 3.3v?
1
Is there an ADC chip that reads only when triggered that can be synchronized with PWM?
1
LED Driver with relatively high capacitance on PWM input causes PWM signal to be laggy
1
Failed to use a low pass filter in order to convert PWM input to digital output
3
How to output an amplitude of 10 volts PWM signal?