Motor impedance too high at 20kHz

Can anyone help me to understand if I need to add capacitors to the H-bridge outputs to smooth out the current pulses to reduce the motor impedance?

Also at work we are driving the same motors at 20kHz right now and they are having no issues, so I am confused as to what I am missing.

Something is wrong with your setup. Higher PWM doesn't influence the working as you describe. Keep in mind that fundamental frequency (in case you use three phase BLDC) would have such impact, not the PWM frequency.

Certainly you don't want to install capacitors on the output of H-bridge as you would overload the transistors. The analogy with power supply, when capacitors are used to smooth the voltage ripple, with motor driver we use chokes to smooth the current ripple. As you said that you have a quite large DC motor, then it already have a large inductance.

The issue is probably related to incorrect driving signals sequence.

Compare the board with issues and the one without it. At first look, I can see that it has upper P-MOSFET and lower N-MOSFET with only two inputs, thus each one for FWD or BKW. Without a gate driver IC, it can be difficult to have a short turn on/off time, so at higher frequencies the H-bridge (specially the upper P-MOSFETs) begin to heat or cross-conduct through the lower N-MOSFET. The commercial says 0-10kHz, so I wonder if it's capable up to 100Hz for sure not 20kHz.

An isolated board capable of 20kHz PWM should have:

Source of the image 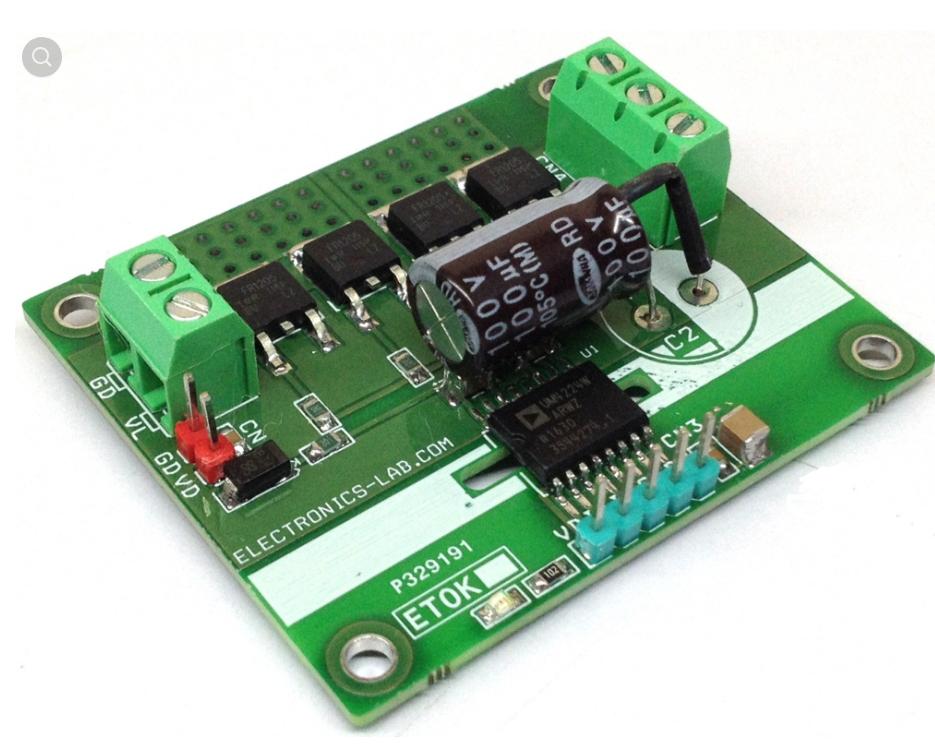 Not the answer you're looking for? Browse other questions tagged arduino motor pwm impedance h-bridge or ask your own question.