Is it possible to generate light with an antenna?

An antenna (e.g. a dipole) is able to radiate at a certain frequency thanks to the EM field generated by a current provided by a signal generator at such a frequency.

My question is: is it possible (or, maybe will it be possible) to generate light by using a voltage source at frequency of light (480-750THz)?

Photonics is a thing, and it very much treats light as electromagnetic waves in waveguides on silicon, with mixers, delay lines, matching circuits, amplifiers etc as you'd do for a RFIC.

Just as an antenna doesn't generate the signal to be transmitted, an oscillator is used to generate a carrier wave – just that the oscillator happens to be a laser diode, sometimes on the same substrate, instead of a discrete transistor, an L and a C. An antenna is just an impedance matcher between transmission line and free-space, and that's what you find on every laser diode die, standard LED die at the point where you try to convert the surface-bound or substrate-travelling lightwave into something emitted into the fiber or a lens or free space.

What you definitely don't find is the classical dipole being fed with a current coming from an oscillator. That doesn't work, as most such components are comparable in size as the antenna. But, there are photonic antennas. These convert a free-space EM wave to a guided wave, just as your phone's antenna converts free-space waves to waves in a coax cable (and vice versa), while simulataneously mixing things with a lightwave. This is not an antenna in the sense of a \$\lambda/4\$-monopole or something. 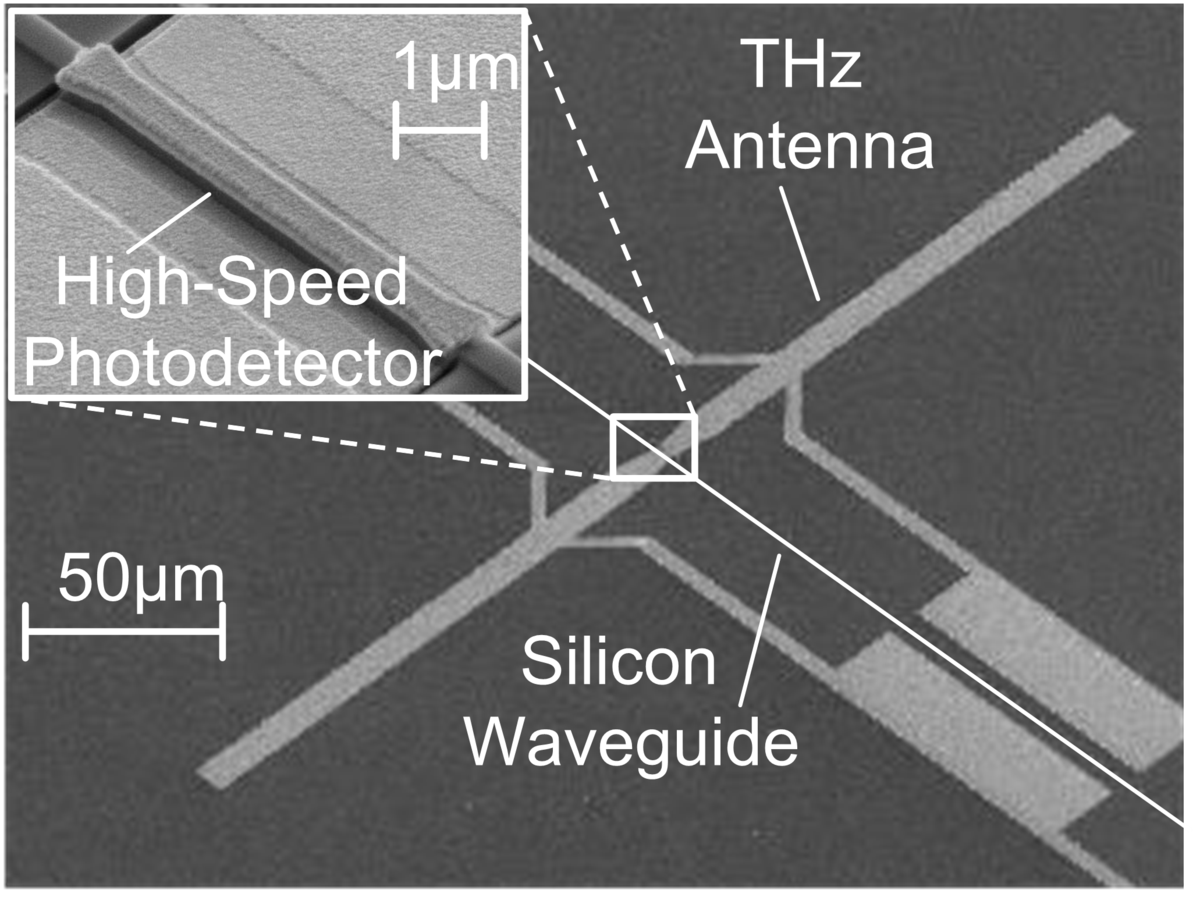 THz Antenna coupled to a high-speed silicon plasmonic photodetector enabling opto-electronic generation and detection of waves by photomixing within a THz-bandwidth. Source: Institute of Photonics and Quantum Electronics (IPQ), Karlsruhe Institute of Technology

The wavelength of 750 THz is 400 nm so, your dipole would need to be 200 nm long to make a radiating antenna but your biggest problem (in 2021 and probably beyond) is being able to produce a frequency of 750 THz. Leave it to the optical guys is my advice.

Another consideration (from classical Friis equations) is that the path loss (from a transmitting antenna to a receiving antenna) is proportional to frequency. This is because a receive antenna shrinks with frequency and therefore cannot capture the same magnitude E-field. In other words, as frequency rises, dipole length shortens and E-field "captured" reduces.

The other answers are correct, the frequency of light (i.e., visible light) is so fast that it's really hard to do. People do make THz light (even longer wavelength than infrared) using antennas, and can even make mid-infrared light using nanometer scale antennas - but this is highly technical, requires teams of scientists, and millions of dollars.

No, it isn't possible. The properties of the materials are very different at such frequencies.

Consider the materials typically used in chip manufacturing. We use aluminum as a conductor, and silicon dioxide (glass) as an insulator. But at 750 THz, aluminum blocks the EM field, either reflecting it or absorbing it as random thermal energy. And glass passes the field quite readily — that's why we use glass fibers for long-distance telecommunications today.

So, with that in mind, how would you actually construct an "antenna"?

Per KD9PDP above, about 40 years ago I encountered another ham with a VERY strong signal on 75 meters single side band. It turns out he was running 3kW peak IN HIS CAR! To accomplish this, he had a specially wound 3 phase generator under the hood that generated high voltage and reduced the complexity of his linear amp power supply. When he spoke, a totally awesome visible ball of ionization formed around the tip of his center loaded antenna and a sound, like AM demodulated SSB was clearly audible. He had a sacrificial piece of wire on the end of his antenna that had to be replaced periodically due to the arcing.

Of course such a setup was illegal for exceeding the power limitation, and would now be further illegal due to modern limitations on human exposure to electromagnetic fields and other safety requirements in amateur transmitting equipment.

But, yes, he produced light at the end of his antenna.

Both radio waves and light are the same thing:EM radiation . So if you could create a RF signal with a frequency of 750THz we would receive this as light.

Not the answer you're looking for? Browse other questions tagged antenna electromagnetism light electromagnetic optoelectronics or ask your own question.