Optocoupler design - why does this circuit work?

I am busy with some calculations regarding the components around the optocoupler and I am now finding myself in a bit of a mental struggle. I have done quite a lot of reading (at least here, here, here, this Vishay guide, this Toshiba guide and this Avago guide to name a few) and I still find myself unable to answer a few questions. The more I try to figure out the correct math, I just end up with more questions that need answers.

The application for this circuit is to isolate signals from mechanical switches on one power network (supply voltage of 5 V) to the inputs of a port expander IC on another power network. The optocoupler used in the design is the TLP621-4.

This is the circuit in question: 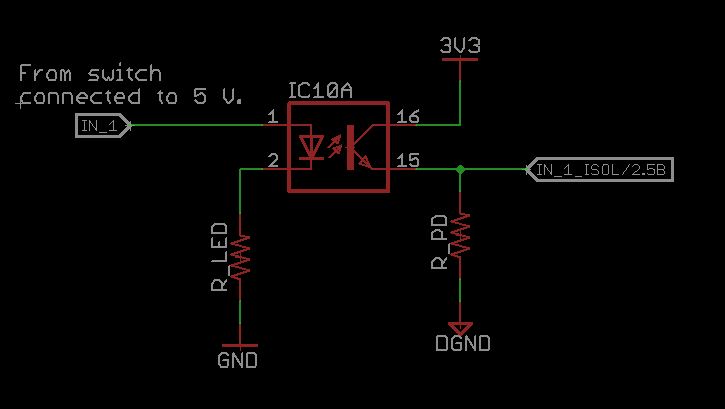 Firstly, there is the input stage of the optocoupler. Designing for that seems to be rather straight forward – choose a suitable current to drive the LED at in order to switch on the phototransistor so that the correct logic voltage can appear at the pins of the port expander. The port expander runs at a supply voltage of 3.3 V, so the switch signals will also be translated/shifted to 3.3 V signals. Choosing a forward current of 5 mA corresponds to a \$V_f\$ of approx. 1.2 V at 25 °C, according to the datasheet.

Below follows the circuit as I have built it for testing purposes - it works. However, it is all nice that it works perfectly for this application so far, but it bothers me WHY it works: 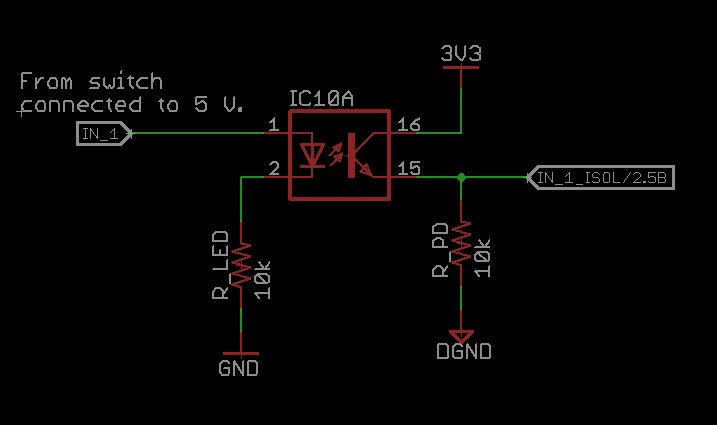 I would appreciate it if someone could shed light on why the above circuit works and what the corresponding parameters are. Also, if the above design is not optimal, what would the correct approach be to designing the circuit for the mentioned desired specifications?

The way I would design this circuit is to have the LED run at a reasonable middle-of-the-range current, to ensure that the output transistor saturates regardless of what the CTR is. Since they guarantee the CTR to be at least 50% with a forward current of 5 mA, that's the condition I'd design for: 5 mA input, and 2.5 mA output. So choose your input resistor to give 5 mA through the LED.

Then, you need to select your output resistor. You are guaranteed that the output current will be at least 2.5 mA if you have no resistance in there at all. But we don't want that--we want to ensure that the transistor is saturated. So we use a resistance that, in combination with the transistor's \$V_{CE,sat}\$ (max 0.4 volts according to the datasheet), results in, let's say 2 mA current on the output.

Now, regardless of what the device's actual CTR is, you'll see an output current of approximately 2 mA through the resistor, and an output voltage of between 2.9 and 3.3 volts (depending on what the device's actual \$V_{CE,sat}\$ is). This is a voltage high enough for any 3.3 volt logic input I've ever worked with (and many, if not most, 5 V logic inputs too) to read it as a reliable high.

To answer your questions in the comments:

If the saturation voltage is a fixed value, then how does increasing (or decreasing) the resistor value not have an influence on \$V_O\$? Does the collector current compensate for the change in resistance, or am I missing something?

Yes, the collector current will reduce. One (oversimplified!) way to think of it is that (for complicated reasons relating to the way transistors work), it's not possible for there to be current through the transistor with \$V_{CE} < V_{CE,sat}\$.

Another intuition is to think of it this way: With the transistor powered from a 3.3 volt supply, with a 1 kΩ resistor in series with it, could that transistor possibly drive 10 mA through that resistor? That would make 10 volts across the resistor--but you only have 3.3 volts to work with! Clearly, it can't drive that much current, even if the CTR or β says that it should--this is when the transistor saturates.

An easy way to do it is as follows:

The CTR is specified under optimal conditions to maximize the number, in particular Vce = 5V, Ta = 25°C and the optoisolator is brand new.

Depending on whether you buy the premium version or not, the CTR is guaranteed to be at least 50 or 100.

However your condition is not Vce= 5V, it's more like Vce < 1V. So, more realistically, use the datasheet saturated CTR numbers of 30 or 60%.

There are several other factors to consider- CTR typically drops about 25% as the temperature increases (see the typical curves). And the LED will age and become less bright as time passes (heavily affected by If and quality of LED). Toshiba is a top tier opto manufacturer, so probably the effect will be relatively small, but maybe allow 33% for that to be safe. So we can count on 0.30.005mA0.66*.75 ~= 750uA. So a load resistor of 4.7K or more should be okay.

One more thing- speed. Toff typically varies from about 50us to about 150us as the load resistor varies from ~5K to ~20K. So, lower is better.

So 10K is a reasonable choice for the load resistor. It's possible to use a lower value such as 4.7K or 7.5K if you want a bit faster operation and/or guaranteed operation to higher temperatures. If you buy the premium version of the optocoupler you could approximately halve those values.

Not the answer you're looking for? Browse other questions tagged opto-isolator phototransistor or ask your own question.