I have a Delta-Wye transformer, N1/N2 = 4, and am trying to solve the circuit below, with 120VAC applied to terminals VAB only. On the secondary I have 1 ohms connected between a-n and 5 ohms between b-n. The other parameters are:

rs = resistance of primary winding A, B, and C

rr = resistance of secondary winding a, b, and c

Llar = Secondary leakage inductance on winding a reflected to the primary

Llbr = Secondary leakage inductance on winding b reflected to the primary

Does anyone know how to find the primary line current (IA) using the symmetrical components method? All examples that I could find use transformers balanced loaded. I really appreciate any help!

Ok, here is what I am thinking as an approach. Below I show the transformer connections for a Dyn bank that is standard connected per IEEE (low-side lags by 30° and assumes A-B-C rotation & subtractive polarity transformers). 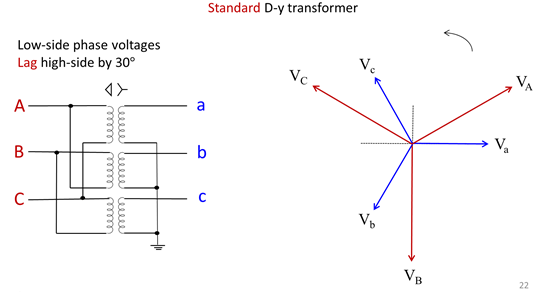 So, I think you can simply reflect that b-phase load (\$5\Omega\$) to the primary and then forget about the transformer. Your problem now being reduced to a primary A-B fault with resistance (adding in your winding impedance data as desired).

Below is an example of sequence network connections for a B-C fault with resistance. You would shift angles for the A-B fault. 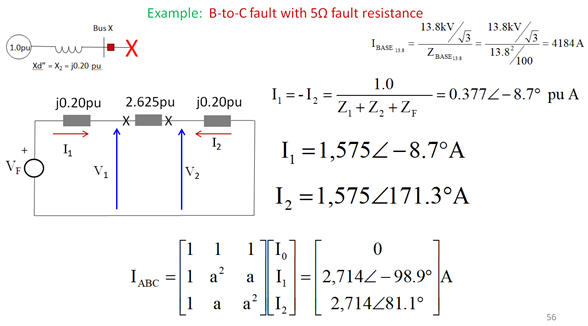 Note: Both images are from my lecture notes on symmetrical components.

Additional comments: If the secondary current of one of the 3 two-winding transformations is zero, \$I_S=0\$, then the primary current for that particular two-winding transformation is zero as well, \$I_P=0\$ (neglecting magnetizing current). Another way to look at it, if the secondary is open-circuited then it's load impedance is \$\infty\$...which when reflected to the primary winding by turn ratio squared is still \$\infty\$, an open circuit.

Not the answer you're looking for? Browse other questions tagged circuit-analysis transformer electric-machine fault or ask your own question.