I want to make a 12V range battery array with 2P 3S 18650 cells. The cells will be charged in an external charger NOT in the pack. They are removable in holders So I can pluck them out and charge externally. I have the basic plan below.

Some criteria: The amp draw is relatively low at around 1A. I used the protected cells so one or more cells can't discharge below recommended volt limit. The protection also prevents a good cell from trying to charge and dump too much current into a bum cell that may be in parallel with it. That would be rare unless there is a mistake or a bad cell, it is a precaution. That is the theory.

The question is do I need BMS and if so how and where would I put it? Would I use a regular 3S BMS and treat each two battery cluster as one cell? Would a BMS conflict with the protection chips in the batteries? 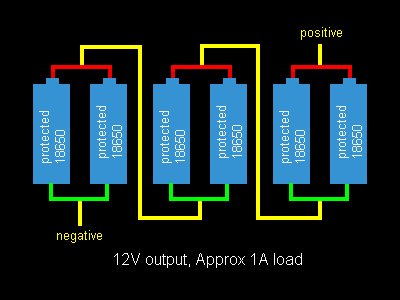 The generally accepted method for grouping Lithium Ion cells in a pack is to start with well matched cells (same brand and model and new ideally, and factories will go as far as to buy a massive batch and group similar cells from that in a process called binning) and bring them to the same voltage before ganging them. in addition, balance parallel cells by temporarily connecting them in parallel with a resistor ahead of time to limit current before welding them in parallel.

Weld them with bus strips preferably over using battery holders and strongly over soldering. Welding is preferable as once the batteries are matched they should be kept as a group until end of life.

You have a series arrangement, which means you should indeed use a balancer board. It won't conflict with the protection in the batteries, but if your current was close to the limits of a single 18650 (it's not), you would want to take into account that if one battery dies and removes itself from the circuit, it will double the current through the other battery, increasing it's charge and discharge rate. It's output voltage will change faster than the other sets in the series, so the BMS will have to work harder to balance voltage. The balancer works by wasting the extra power causing voltage mismatch, so efficiency of the entire arrangement will drop, pessimistically similar to if you had changed to a 3S1P arrangement, although it should continue working.

So with those 3 pieces of information: Matching should be done, connections should be permanent and a balancer board is necessary, you should strongly consider buying and already made pack. You may well get better performance for your cost and superior protection, although you may be giving up individually protected cells and the redundancy you're creating.

Not the answer you're looking for? Browse other questions tagged batteries lithium-ion bms or ask your own question.

3
Replacing 18650 cells in laptop battery with greater capacity ones
4
How to charge a 18650 battery pack with BMS
7
Appropriate charging current for parallel 18650 lithium cells
5
Do I need a BMS for Li-ion batteries connected only in parallel?
4
4s battery pack, how to build?
1
How to charge lithium ion batteries - BMS (and) TP4056
2
Power a 12V 30A (instantaneous) load. Possible with 18650 cells?
0
Charging lithium-ion cells in series individually with multiple CC regulators from a single power supply
0
Individual cell balancing on multiple packs