Is an opto-coupler fast enough for this application?

I am counting the pulse edges from a quadrature encoder with an FPGA and using opto-couplers as the encoder is powered with 12V and the FPGA inputs are 3.3V. The encoder is 1000ppr with 2 channels and I count both the rising and falling edges.

The opto-couplers are ILD74 (Link to ILD74 datasheet) and the inputs to the FPGA are pulled up with 10K resistors, like in the image at the bottom of the question. The FPGA inputs go through inverters to match up with the encoder outputs, as an encoder pulse pulls the FPGA input to ground.

The ILD datasheet has a ton-toff switching times of typically 3us which is over 300kHz, so I think these opto-couplers should be ok?

Also I'm interested to hear if anyone has any recommendations to this circuit or any advice as to how encoder outputs are connected to microcontrollers / FPGAs in general. 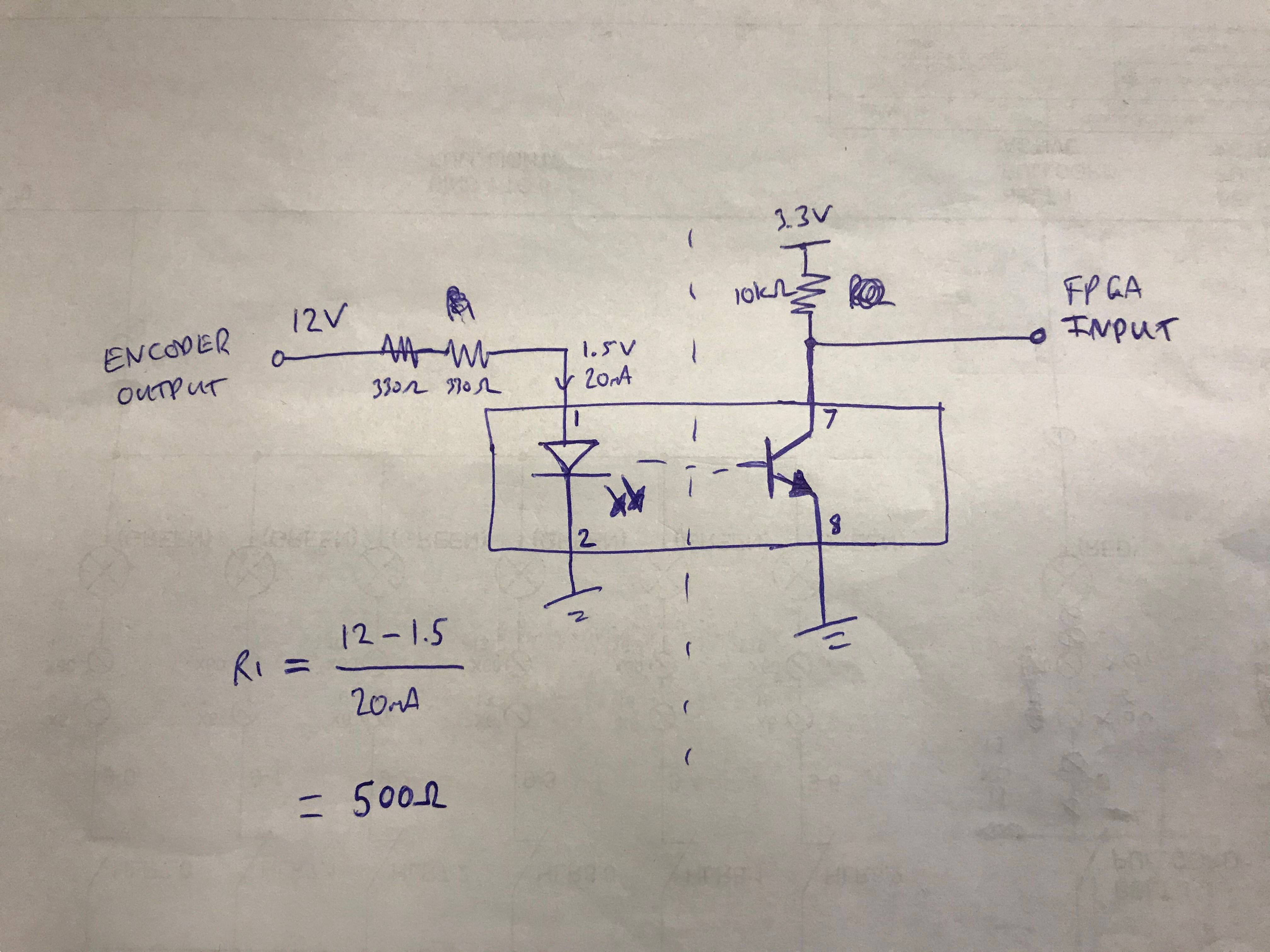 I have added the output of my encoder at approx 5000rpm. The output frequency is around 85kHz. 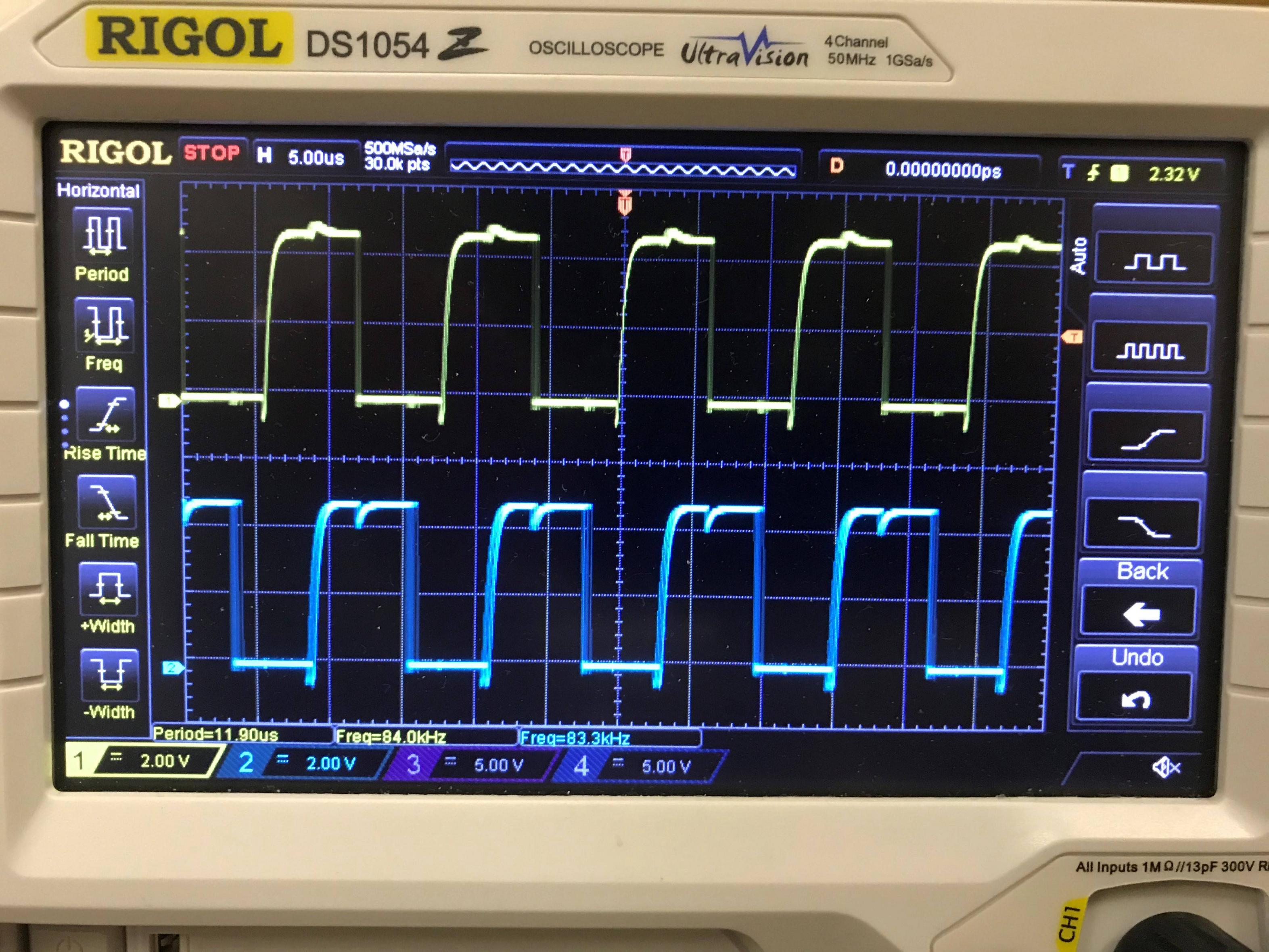 I am waiting for parts to arrive and I will get back if I have anymore questions. I will close the post when I get the problem working. Thanks everyone!

No, this will not work with the 10kohm load resistor.

Look at datasheet diagram 13, at 10kohm load resistor, it takes about 50us for the signal rising edge to propagate from input to output, while falling edge propagation is below 2us.

As 75kHz is about 13us period, you need signal rising edge propagation time much faster than that, and you can go down to 10us with about 470 ohm resistor.

If this resistance is too low, then you need another optocoupler.

Get an optocoupler which is designed for high enough speed. Its receiving end is a complex amplifier circuit instead of pull-up with a resistor.

For high speed an ordinary opto-coupler could be used if there's very low resistance pull-up resistor and an amplifier or a cascode amp is used to prevent Vce voltage changes of the opto transistor during the state transitions.

Here's one. The internals are not revealed in the datasheet but the speed should be enough:

It's Vishay 6N137A. It needs a pull-up resistor like an usual opto-coupler. It needs also +5V operating voltage. Read the datasheet carefully!

Vishay has published also an application note for high speed optocoupler. I guess it's both interesting and useful: https://www.vishay.com/docs/83747/appnote71.pdf

There's a comment which says that also the LED drive must be crafted for speed. If one simply opens the switch which feeds DC to the led through a resistor the led glow decays slowly because there's plenty of minority carriers which must vanish and they make light as they vanish. The charge must be at least shorted or preferably have a reverse feed.

Also switching the led ON fast needs attention. The same carrier cloud must be formed without too long charging time. Here's one old idea to get the speed with discrete components and with one switch (=M1) 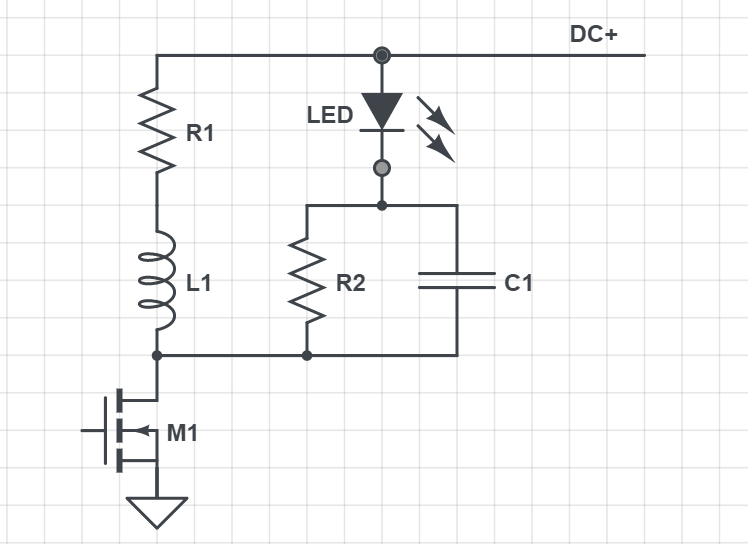 C1 is classical speeding capacitor which causes current peak when M1 starts to conduct. L1 pushes current through led to reverse direction when M1 stops conducting. Do not attempt anything like this if you cannot calculate the needed boost pulses. Too big C1 and L1 can destroy M1 and LED. Try at first how the system works without a circuit like this.

Totem pole output can make the needed boost to both directions with no inductor. It's the next thing to try if some speeding is needed.

The opto-transistor is fast when switching from OFF to ON that is from FPGA input 1 to FPGA input 0.

The problem here is that R has the responsibility to pull from 0 to 1 the FPGA input and it's really slow.

Not the answer you're looking for? Browse other questions tagged fpga opto-isolator rotary-encoder or ask your own question.