I'm building an open source, commercially available eurorack module which is based on a stm32 chip. The problem I'm facing is that when the module boots up sometimes it is working as it should but most of the times, it seems to be working at a lower rate and it has unpredictable output.

I checked all the voltages from the regulators and I checked the soldering of all the parts and everything was right. After checking the 8Mz crystal I found that the one end oscillates as it should but the other does not. When the module works as intended, it oscillates nicely but after a while it goes berserk along with the module outputs.

Now, I double checked the values of the capacitors (20 pF) and the value of the resistors going to the stm pins (100 ohms). I replaced both the stm and the crystal with new ones. I reflowed with hot air the crystal and the stm but the behaviour is the same.

What strikes me as quite peculiar is the fact that sometimes the module works but after some seconds, of even minutes (after a reflow for example) the crystal stops oscillating as it should. Can anyone tell me what can cause such a behaviour?

The schematics are here: pdf link 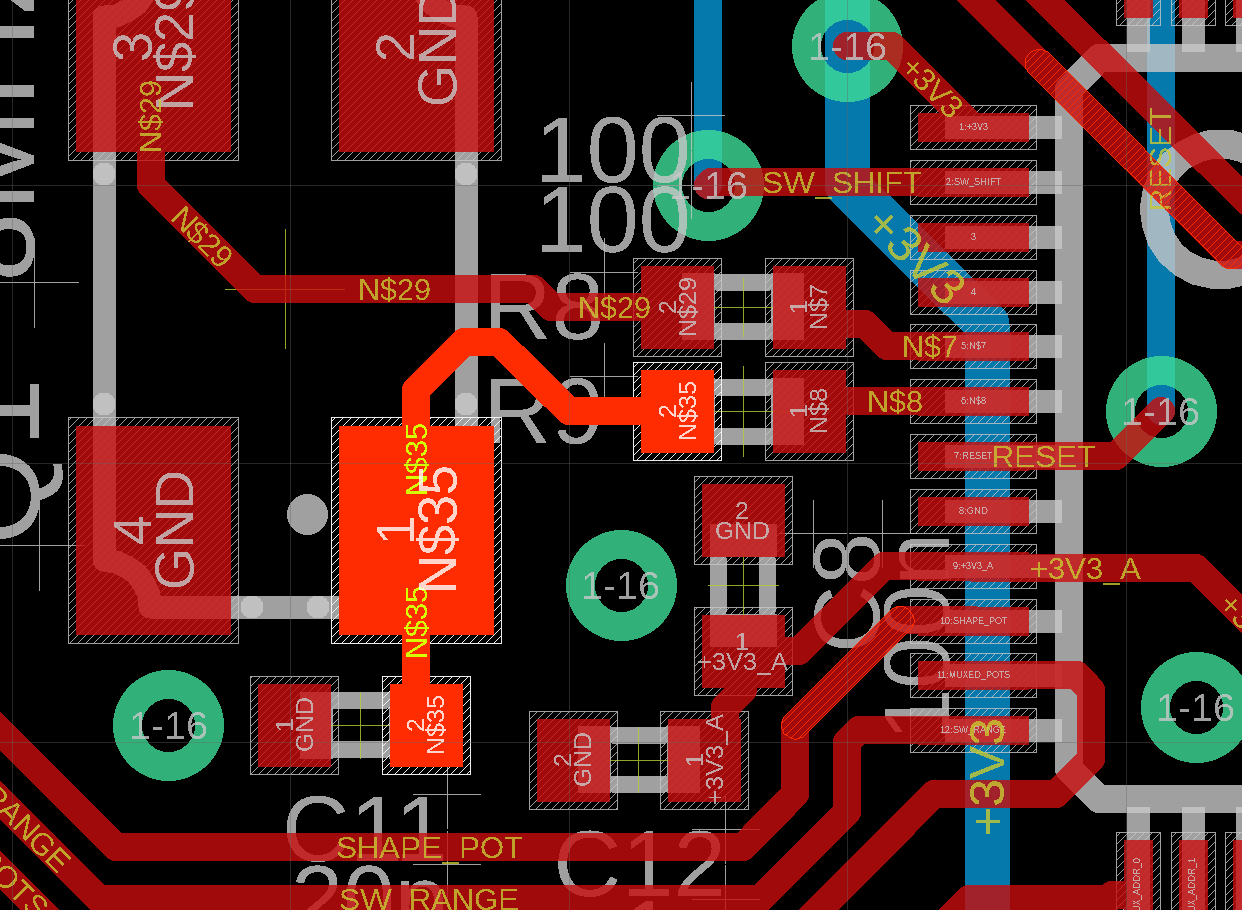 Thank you all for your suggestions. :)

As Cartman mentioned in his comment, your resistor values are likely too high for your crystal. You'll also note from the reference circuit that the RExt is only applied to the OSCOUT pin (it is used purely to reduce the drive strength of the oscillator amplifier internal to the microcontroller to ensure that you do not exceed the rated Drive Level for the crystal).

A consequence of having RExt too high (or of otherwise dampening the feedback signal too much) is an inability of the circuit to oscillate. Depending on the particular crystal and cut in use, it might otherwise result in the wrong frequency mode of the crystal being selected.

From AN2867 “Oscillator design guide for ST microcontrollers” https://www.st.com/resource/en/application_note/cd00221665-oscillator-design-guide-for-stm8afals-stm32-mcus-and-mpus-stmicroelectronics.pdf

You'd be better to look at the drive level from the microcontroller, compare this to the drive level allowed from the crystal, and only if they are not directly compatible, then applying RExt to reduce the drive level. AN2867 recommends a first pass estimate being to set RExt = 1 / (2Pif*CL2), which would have given RExt ~ 1kOhm. Then you need to run the numbers on the gain margin with this additional resistance..

Sometimes you may even find that the ESR of the crystal is too great, and it can't be used for a particular microcontroller/oscillator circuit (often the case with low power 32.768kHz RTC crystals with very high >90kOhm ESR).

Not the answer you're looking for? Browse other questions tagged stm32 crystal or ask your own question.