Can an LED "fluorescent replacement" tube be powered without a ballast?

Two high-rep answers seem to have made the same misunderstanding, so to clarify:

I have a bunch of 4-foot fluorescent fixtures with two tubes each. Two of them died recently. One with bad tubes and one with a bad magnetic ballast. I know it's magnetic because I took it apart and saw just enough "big iron" that wasn't covered by the potting material. I replaced the bad tubes with LED's, and they work wonderfully...or at least they did until I got the idea to rescue the other one with the bad ballast.

Looking at the "classic" schematic for a magnetic ballast with a single tube, I figured that there were 2 possibilities for the LED tubes: 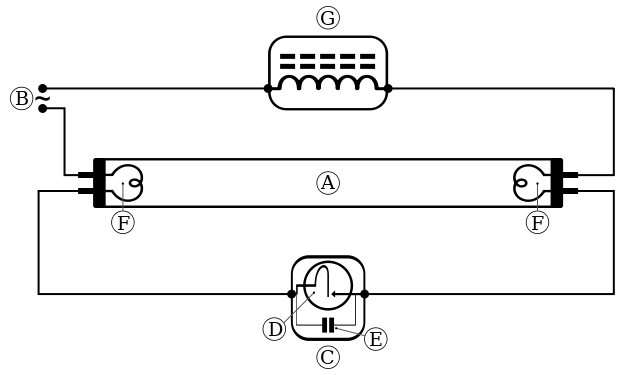 I couldn't get a definitive schematic for a 2-tube magnetic ballast, or for the LED tubes, so I just went with the single-tube theory and figured I'd just wire two of those in parallel, permanently in either the "start" or "run" mode:

My first try was "run" mode, since that's how it is when it first receives power (failing that, the high voltage across the starter causes it to close, which switches it to "start" mode): 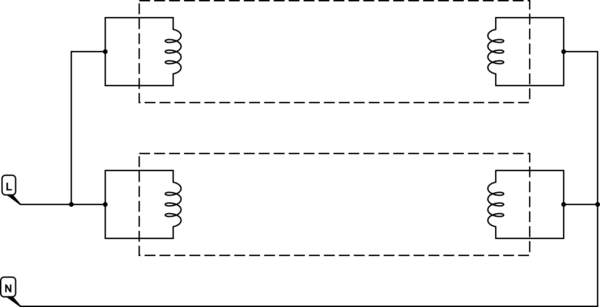 A single LED tube, with the other socket left empty, flashed briefly and went out. I thought I had fried it, but when I put it back in the fixture that it came out of, that still had a good ballast, it came on again and stayed on.

Well, okay, so hard-wiring it for "run" mode as I understand it to be, minus the inductor, doesn't work. (LED's need a different kind of current control anyway, so the missing inductance shouldn't matter, right?)

So I rewired it to always be in "start" mode instead: 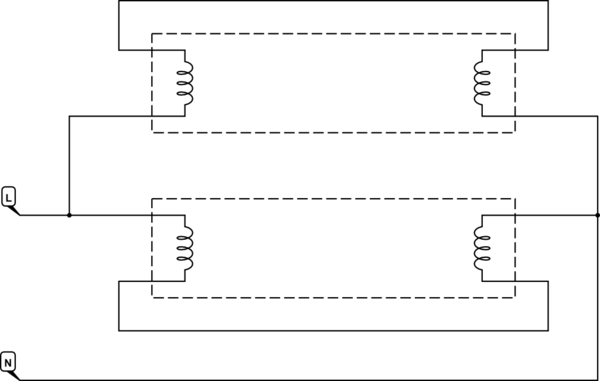 Exact same behavior. Leaving the other socket empty, a single LED tube flashed briefly and went out. Putting it back in the good fixture had it back on again, and staying on.

In both cases, I also tried the other LED tube, with the same results. After both configurations failed with both tubes, I noticed that they were both flickering in the good fixture, as if they were rectified with no filter, when I don't remember them doing that before. I suppose they could have been and I didn't notice, so this might not be an indicator of anything wrong.

I also noticed partway through the test, that the remaining tube in the good fixture was dimmer than when its neighbor was present. Not just the total light output being less because I took out half of the emitters, but the tube that I didn't touch also reduced its own output when its neighbor was removed. So the magnetic ballast is apparently doing something active, even with LED's instead of a 4-foot spark gap.

Since it seems that my understanding is a bit lacking here, what's really going on? Is the LED tube actually using the ballast's inductor as a current-limiting device, like the capacitor in a "transformer-less" power supply? If so, then I probably over-drove it...and triggered a self-protection thing perhaps, because it still worked in a "correct" fixture? I'd be surprised if these cheap things had anything more than the bare minimum required to work at all, but the box does say that they work with most fixtures, so... ¯_(ツ)_/¯

And is it possible to wire this up with no ballast at all, and have a pair of cheap LED tubes work reliably?
(I figured it was worth trying because the tubes are cheap enough to break some in the process of learning.)

I think the heater type ballasts will be problematic with a dependency on two tubes working to load the ballast with an equivalent load.

I replaced all my old ballasts like this with Quad output ballasts that are independent so you can operate 1 to 4 FL tubes from 1 ballast. I extended the hot and common Yellow wires thru to the neighbouring fixture “tombstone” end connectors without difficulty. Although I chose tri-phosphor full spectrum FL 32W 4’ tubes 5000’K I believe these will work properly on LED tubes made to work from new ballasts. My tubes are 30k to 50k hr rated and have lasted 8 yrs so far with 86 lumens per watt and used twisted pairs to reduce EMI. In some cases like the garage, I just used the tombstone connectors PU glued and wired with 4 tubes over an 8’ span and works perfectly.

The fluorescent replacement people slowly are getting their act together. The latest is three types of replacement tubes: A, B, and C. Page 4 of this brochure explains the differences. I've been going through this with basement fixtures. Very few LED "tube lights" at Lowes or Home Depot are marked this way. Plus, some are marked that they will work with solid-state ballasts, but don't mention magnetic ballasts. GE has some marked explicitly for magnetic ballasts, but they are more expensive.

Read the datasheet for the LED tubes carefully. I suspect you will find they will take a full 240 VAC happily, or 115 VAC.

I have replaced several fluorescent fixtures now with LED tubes run directly from mains. One tube was a Phillips unit, several others were very cheap 'no-name' tubes. They were all rated for, and have run for a couple of years directly on, 240 VAC.

The instructions typically tell you to replace the old neon starter with a 'LED starter', which simply provides a fixed connection across the starter terminals. The LED tube accepts a high voltage across the terminals of one end, with the terminals at the other end having a fixed connection across them. This way, you can simply re-use the old fixture. The ballast will drop some voltage, but the tubes are built to accept a wide range of input voltage. When I tested, mine were still going strong at 75 VAC.

Whichever way round you connect the tube into a standard 240 V ballast fixture, you end up with the ballast in series with the tube electronics, via the dummy starter, and the tube's 'other end' connection. Obviously, with this many connections in series, there's the opportunity for a poor connection somewhere. Why was your fixture 'bad' in the first place?

There will often be a problem with 2-tube fixtures, and 115 V fixtures. The first can be designed to put the tubes in series, with corresponding changes to ballast and starter. The second can use a more complicated auto-transformer ballast to cope with the low input voltage. Both can potentially mess up the simple 'tube-replacement' way of using LED tubes.

Subject to the specifications, or markings on the tube, saying you can, you should be able to drive the tube directly from mains. To test a tube out of the fixture, you need to identify the 'power' end and the 'short circuit' end. The short circuit end will read 0 ohms on a multimeter. The power end may have a voltage marking on it (all my tubes did).

The safest way to repair an old bad fixture to take LED tubes is to identify a single circuit for each tube. Remove the ballast. Keep the two connectors wired in series, if the connectors are OK, so that you can plug the tube in either way round. If you choose like I did to provide full power to one end only, then you must make absolutely sure that you plug in the tube the right way round. Provide the fixture with a low value fuse, for when you inevitably plug it in wrong.

Not the answer you're looking for? Browse other questions tagged led repair fluorescent-lamp ballast or ask your own question.

3
Improvized small aquarium lighting
3
Is it more energy efficient to remove the ballast by using LED Tube?
1
Power on ballast without light tube
1
How can a fluorescent lamp run without a ballast?
0
How to determine what ballast for fluorescent lights?
1
Diagnose failure in LED driver
2
Does current still flow through ballast with fluorescent bulbs removed?
0
Can a fluorescent light electronic ballast fail and still supply voltage?
0
Troubleshooting failure (low output) in LED tube bulb
0
Efficiency or longevity issues when using 2 lamps on a 4-lamp fluorescent ballast?