I could have added more details but the question is too generic, hence generic answer.

Wikipedia: Flash memory has a pretty good explanation of the structural difference between NOR flash and NAND flash. 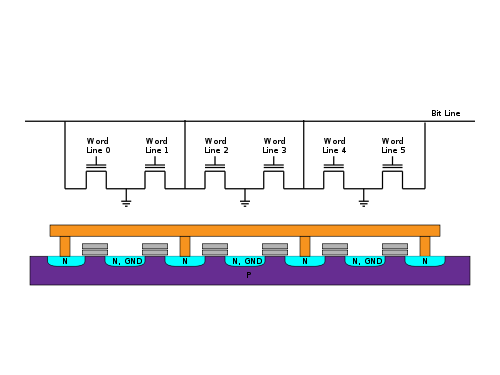 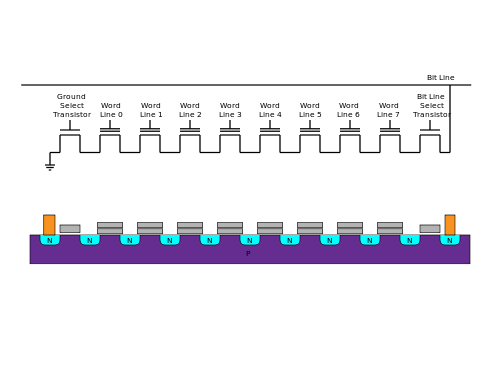 Both kinds of Flash memory use floating-gate transistors. To read out a word, other stuff on the flash chip drives the selected word line to a "small" positive voltage. When the floating gate is charged with electrons, it shields the transistor from the word line enough that the transistor stays OFF. So the resistor pulls the bit line HI, and the CPU sees a one (1) bit. When the floating gate is erased, even that "small" positive voltage on the word line is enough to turn ON the transistor and pull the bit line to LO, overpowering the resistor, and the CPU sees a zero (0) bit.

NAND flash connects those transistors in a NMOS NAND gate. To avoid interfering with the selected word line, other stuff on the flash chip sets the other word lines to a "larger" positive voltage (turning their transistors on).

As you can see from the purple chip cross-section, the NOR flash requires many more contact vias from the bit line down to the transistors. Because NAND flash does not need those vias, the physical layout of NAND can be packed significantly less area per bit. So NAND flash can cost significantly less than NOR flash (per bit, and when built from equivalent transistors). (But even NOR flash costs less per bit than DRAM).

Both parallel and serial off-chip interfaces are possible with either NAND or NOR flash.

Execute-in-place applications (XIP) execute directly out of Flash. All the bits of the instruction need to be fetched every instruction cycle, so such applications tend to use parallel NOR flash.

Flash configuration memories are usually serial Flash chips. I think I've seen both serial NOR flash and serial NAND flash in this application.

(The pull-up is usually not a literal resistor. The details didn't seem relevant here.)

I don't know what you mean by structural - if you mean the internal structure, I have no idea.

Check out the following:

Not the answer you're looking for? Browse other questions tagged memory flash non-volatile-memory or ask your own question.

6
Why is NOR memory considered XIP, and NAND memory is not?

1
Why the sector erase time change in the new Nor flash cause the driver cannot work?
12
Why must flash memory be written/erased in pages/blocks?
5
Why are NAND flash and NOR flash named using the terms NAND and NOR?
2
NOR and NAND flash memory on the same chip
7
Flash memory : What are blocks and pages from a physical standpoint?
5
Why can't NAND flash memory be a random access memory?
0
RAM and Flash structure difference
0
Can I read programmed content inside any sort of non-volatile re-programmable memory device with Microscope, X-ray, etc.?
0
Why doesn't ESP32 support NAND flash?