Ask Question
Asked 5 days ago
Active 5 days ago
Viewed 17 times
0
\$\begingroup\$
Closed. This question is off-topic. It is not currently accepting answers.

I've been trying to diagnose and fix a Garmin Drive 61 that was refusing to start (no display at least). Given that it sees long periods of inactivity (last time we use it was close to 6month ago), I assumed the cause of this issue to be a dead battery. I ordered a new one, plugged it it, but the GPS still wouldn't turn on, even after a few hours plugged into the charger. I then whipped out the multimeter and found out that my new battery was reading 0V. I tried watching the old battery after a long time one the charger. This one was reading a steady 2.40V. Still far from the 3.7V it needs to provide and not improving but this one seemed alive at least.

After doing a bit of research, I learned that batteries were not actually dead sometimes, just in a deep sleep mode and that one could bring a sleeping battery back by applying a higher voltage to it. I managed to get both batteries to around 3.2 / 3.6V which, from what I understood should allow them to at least charge. Still, no luck: The screen stayed black as ever, despite the battery apparently providing tension (as probing the positive pin of the power connector on the PCB was reading 3.6V).
I then started to suspect that something else might have gone wrong on the GPS itself. I noticed gold contact pins around the PCB, that I started probing with my multimeter. They too, were reading various tensions ranging between 4.9V (from the plugged it USB cable, I assumed), 3V, 1.4V (which seemed encouraging, since I know a lot of processors work in this range of voltages) and 0.10V. Some of them read 0.0V too, though. The main problem is that I have no idea what each contact pin corresponds to, and therefore I can't tell if these are normal readings indicating that the GPS is actually working.
Another interesting thing I noticed was that with the USB cable plugged along with the battery, some of the components were getting warm-ish, indicating that... Some things are going on, at least. Im really running out of idea as to what I can do to identify the problem, so here are my two main questions :

To better illustrate my saying, and help have a better picture of what im working with, here are two photos of the PCB stripped of the screen and speaker. 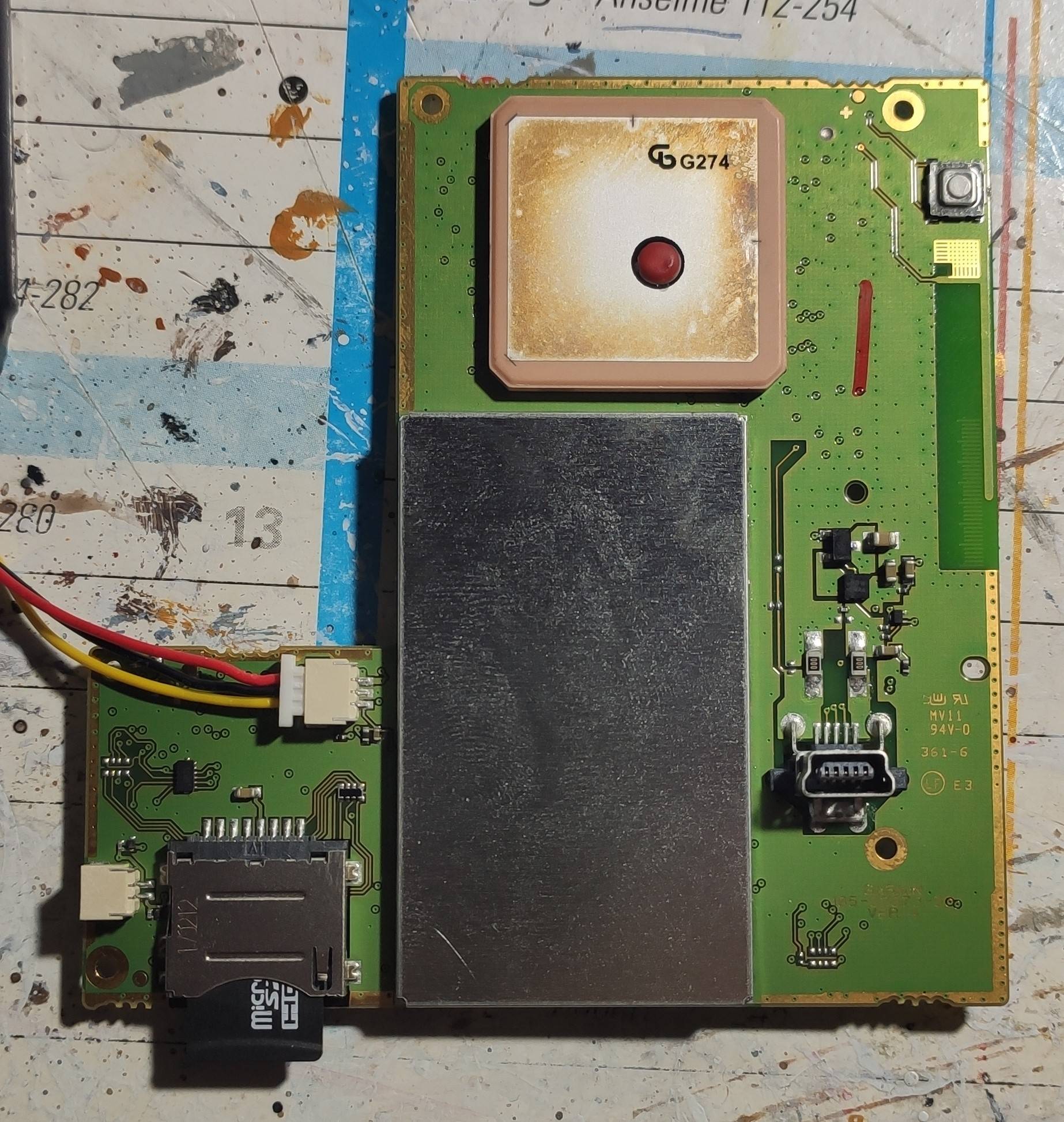 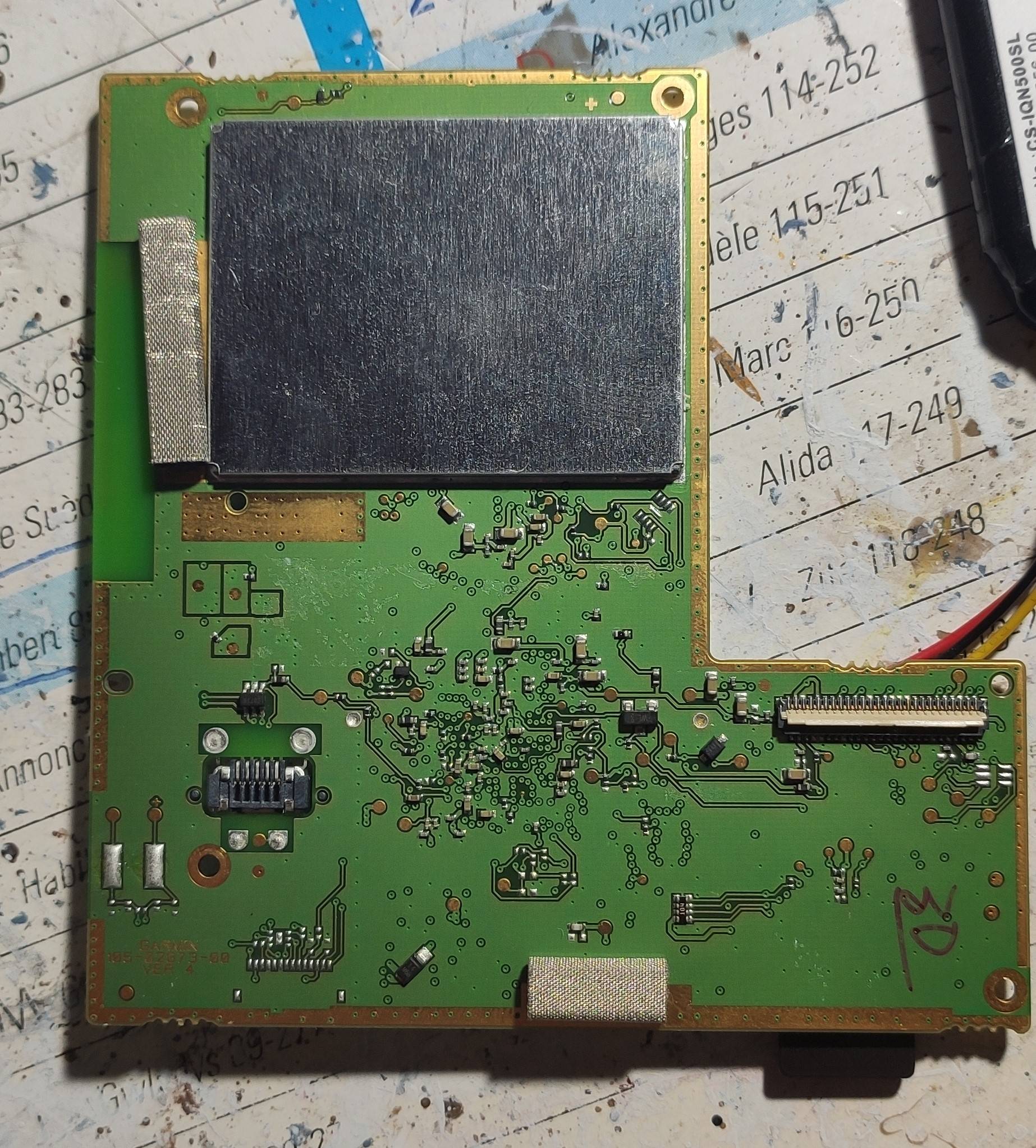 As a final note, im sorry for the super long post lol I tried to describe the problem and what I tried as much as I could. Im new at tinkering with electronics like this, so I only have limited tools.

BruhBruh
111 bronze badge
New contributor
Bruh is a new contributor to this site. Take care in asking for clarification, commenting, and answering. Check out our Code of Conduct.
\$\endgroup\$
1
Add a comment  |

Browse other questions tagged power-supply batteries pcb testing or ask your own question.

10
How do I design a device to automatically switch to the backup battery?
6
How to protect an electronic construction kit (a toy) from damages?
2
From Li-Ion to Li-Po battery: design a new battery pack for old mobile phone
0
Some help with 9V Longlife VARTA batteries?
1
Removing wires from a circuit board socket
1
Best way to solder to a relay pin requiring ~30A of current?
1
Choosing between ipex connector and SMA Connector for LoRa, LTE and GPS
0
Battery voltage increase after load
0
Popped a power supply fuse - What did I do wrong?
4
Learning from checking a 9-volt battery the wrong way with a multitester