When running LTSpice simulations on forward biased diodes I get plots like the following: 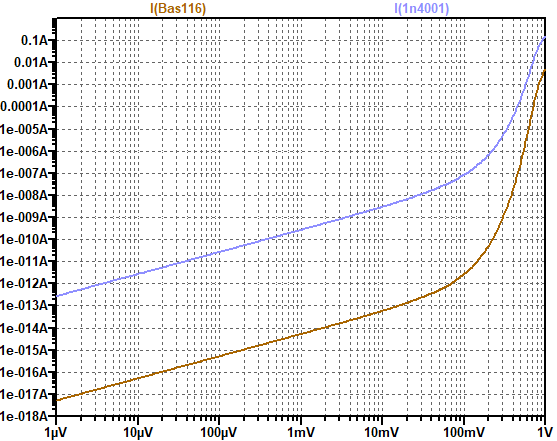 This example is for a BAS116 and a 1N4001 - the current in the sub mV region is about 5 orders of magnitude different.

I am interested in this regime of operation as I want to use antiparallel diodes to clamp a fault voltage of a node to within +/- 1 V of another node, but present as little leakage as possible (pA) between the two nodes in normal operation, where both nodes are within about 1 mV of each other.

I realized now, that the Shockley equation does indeed predict the linear region for \$|V_D|\ll V_T\$. Thanks to Enrico's answer I became aware of the large differences in Diode Reverse Saturation Current that determines the leakage in this bias regime.

For my application, I need a low leakage, but also large current capability for a few µs in the fault case. After comparing several diodes, it looks like unidirectional ESD diodes are best for this job. They will clamp in forward direction to about 1 V, so antiparallelling two of them does a good job. Their actual Zener Voltage does not matter in this application, so one could use whatever is on hand. Their leakage is also much better than rectifier diodes with a similar current rating. The latter seem to favor low forward drop.

There was also the comment of just measuring it. I will try to add results, if I still remember when I get around to visit the lab and find the time.

Diodes Spice models are usually pretty accurate especially those written by the manufacturer.

The difference lies in how the 2 diodes are designed.

I'm focusing my attention on Is, the saturation current.

It seems to me that the saturation currents Is of the 2 diodes are different.

See this Wikipedia formula which is the Schottky model of diodes:

Is depends, among other factors, on:

Happens that the 2 diodes have different cross section and different donors and acceptors densities.

Not the answer you're looking for? Browse other questions tagged diodes leakage-current or ask your own question.

40
How do I model an LED with SPICE?
5
Diode Forward Bias behavior?
1
Using to diodes for OR'ing in OVP comparator
2
Maximum resistance that can be put in series with an input to a (PIC) microcontroller
6
Why does temperature modify the characteristics of a diode?
0
KCL equation considering the leakage current
3
Is there such as thing as an ideal Zener diode?
0
How come rectifier diode current waveform is not distorted?
0
Diode selection for step-down Converter