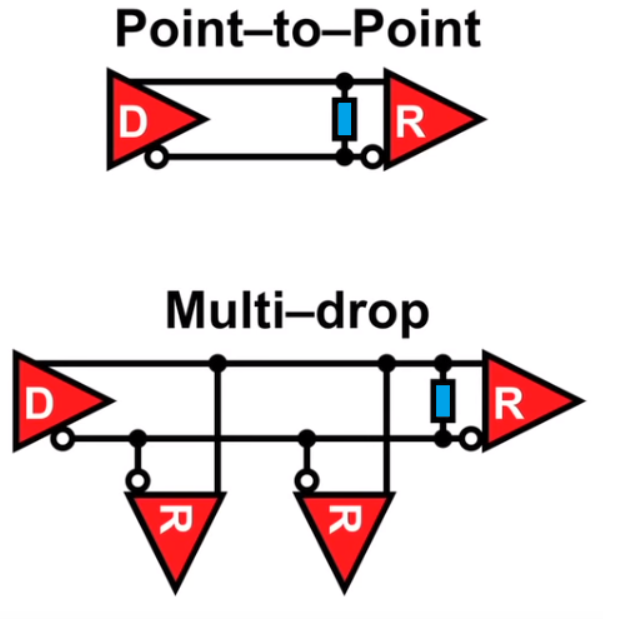 A very basic/stupid question.. I'm designing some LVDS multipoint pcbs, and I'm a bit confused about the source termination on the driver end. my colleague said that ideally there should be a 100ohm parallel impedance matching resistor at the driver output, to reduce signal reflection. but I did some research and 99% of the time, people don't add this parallel termination resistor at the source, and only at the receiver end or the bus end (as shown above).

I understand the termination at the receiver end and bus end, but for the driver end parallel termination, is it really necessary?? my understanding is that if the differential impedance of the tracks is 100ohm, then the driver sees a 100ohm output impedance so adding another 100ohm in parallel wouldn't make a difference. plus the additional 100ohm would load the driver more which could reduce the magnitude of the diff signal.

Can anyone help me to understand why people don't add the 100ohm parallel source termination?

NEW UPDATE: Ok I did some more research today.. and got more confused..

It mentioned series termination on both Out+ and Out- for impedance matching.

Then I found this: https://www.sitime.com/api/gated/AN10029-Output-Termination-for-Differential-Oscillators.pdf

In the LVDS session, it mentioned double termination, which as my colleague/supervisor said, has parallel termination at both driver output and the receiver.

I'm not confident about my reasoning, it feels like i'm trying to just fit an explanation to all the things I've read. if anyone can clarify it a bit that'll be great. So my main questions are:

Your supervisor is wrong. For the topology you've shown, the parallel termination resistor goes at the end of the run, furthest away from the driver.

If this is not done, the signal "sees" an open circuit at the end, and there is a 100% reflection from the open circuit back to the source. This causes the classic ringing seen on improperly implemented interfaces.

In order for this reflection to not occur, the parallel termination resistor needs to match or be close to the characteristic impedance of the trace.

There are a number of questions here on SE that address this issue.

my colleague said that ideally there should be a 100ohm parallel impedance matching resistor at the driver output, to reduce signal reflection.

Line terminators are placed at the ends of the line and are not necessarily co-located where there is a driving source. If a driver is at the end of the line it needn't have a local terminator if it is the only driver on the line.

I just add a few considerations.

Line termination is necessary to avoid reflections, so that a bit of loading (burden) is acceptable to have the received signal more stable.

For short lines you do not need such ballasting because the through time is shorter than the typical time intervals of your signal. For fast 2-2.5 Gbps you have a bit duration of 100-150 ps, with an advised rise and fall time of about 30% of that. Considering a speed along your traces of bout 60 ps/cm (it depends roughly on the sqrt(diel.const)), you see that 2 cm are not impacting, because what matters is the total time, forth and back to thee source.

Correct matching values for the end resistor are of the same magnitude of the characteristic impedance of the transmission line.

As an add on, for Emitter Coupled Logic there was a Motorola app. note (I cannot find it now) suggesting some series resistance at the source, probably to better match the variable impedance of the source with the transmission line. Take into account in fact that the source "impedance" (that is a frequency domain concept, but consider we can define and measure it for every instant of time) changes during the excursion of the signal from 0 to 1 because the source circuit is non-linear.

Consider also that attenuation of the transmission line is higher for high-frequency components (above few GHz or so), and T.I. speculates on adding current-source drivers in parallel, with selective coupling using a series connected capacitor to beef up the high-frequency portion of the signal (rise and fall edges). [I did a similar one to drive laser diodes for a fast fiber optic connection]

In particular for ECL there was some effort to define a complete matching network that took into account differential mode (what we have considered so far), but also common mode (so with resistors terminating to the supply rails). See fig. 1-6 of ref 1).

One last note: as you see in particular i ref 2) the attention is for long cables, going outside your pcb. Also in ref 1) in sec. 3 there is an example with 40 m of transmission line. Short pcb traces are usually not troublesome and do not necessitate heavy ballasting/end matching.

Not the answer you're looking for? Browse other questions tagged differential lvds or ask your own question.