I'm building a small circuit to power a heater at 380mA using a 3.7V battery. I'm using an AMC7135 to regulate the current to 380mA. Without the AMC7135 the heater would typically draw ~500mA, so the AMC7135 should have no trouble regulating it. This is the circuit I currently have:

The problem is that it always regulates the current to just 30mA, instead of the expected 380mA. I assumed this was some sort of inrush current problem, so I tried putting capacitors between GND and OUT, and GND and VDD, and OUT and VDD as well. But that didn't work either.

Interestingly, if I hold the switch down then connect the battery, it goes to 380mA as expected. But pushing the switch alone just gives 30mA.

In the final product, the switch will be replaced with a microcontroller. So it can't be attached directly between the battery and load (otherwise it would be fried by the 380mA).

How can this circuit be modified to get the 380mA regulation as expected?

EDIT:
My inspiration for this circuit comes from this webpage:
http://www.pratikpanda.com/amc7135-pwm-led-control-max-frequency-speed/
I'm assuming that if PWM works, then turning it on and off manually should work too.

Attempting to apply voltage to OUT while switching VDD is extremely likely to put the internal control electronics into either a nonsensical or lockout state, and the switch ought to go between the load and the regulator.

You have two options: 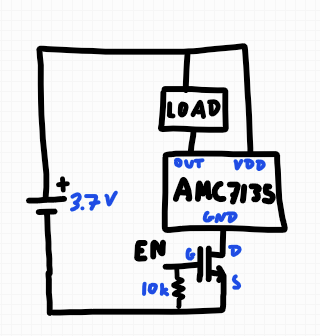 Note further that I've redrawn your schematic right-side-up. Putting ground on top and positive supply on the bottom is confusing.

Not the answer you're looking for? Browse other questions tagged circuit-design linear-regulator or ask your own question.

0
Ri and Ro - What do these acronyms mean?
0
Will this inverted switching circuit to drive 4 Ohm heater work?
0
33 LEDs in parallel over-heating unprotected Li-Ion Battery
0
USB and LiPo power supply with charger
0
How must be the pull up resistor circuit connected to the driver input?
0
LT3015 not regulating
0
Li-Ion Battery Protection Circuit: Do I tie BAT-- to Ground?
1
Use battery to drive main circuit or load battery and cut-off main circuit depending on power source
1
Why doesn't the Attiny85 work in this circuit?