I am building a simple motor control application, driving a series wound motor that runs on rectified 230VAC. Originally, it was controlled by a pendant switch connected to a 7 pin connector. The idea is to modify the setup inside the motor as little as possible and build a remote controller that connects to that same connector.

The connector serves the rectified 230VAC signal and I plan to use this as the source for the remote controller. This rectified signal must come back into the motor housing to drive the motor, and I will be controlling the connection using power relays.

I am planning to use a RF remote switch to control the relay coils, and I have two versions available: a 220VAC version, which does not work with the rectified signal, and a 24VDC version. I order to use the latter one, I need to reduce the rectified signal to 24VDC. What would be the easiest way to do this?

I have been looking into several topologies and found one that may be suitable:

For the circuit I am considering, the input must be the output of the bridge rectifier, which is what is available through the cable connected to the 7 pin connector, so there is no possibility of using a transformer before the bridge. This rectified signal must also drive the universal motor, but this will be done through another circuit.

In this case, this circuit must not drive a large current, only enough to drive the Load. This load is the RF remote switch and the relay coils connected to it.

I am aware that the R should be a power resistor that must stand several Watts of power dissipation. Considering a Zener voltage of 24V and a current of 5mA, with an input of 310VDC, the resistor value must be 59.2k and has a power dissipation of 1.5W. This is without taking into account the current consumption of the load, which at first glance should not be very high. I think a dissipated power of several Watts is an acceptable value considering that the series wound electric motor that it drives has a 1.5kW rating (EDIT: connected to the output of the bridge rectifier through relays, not driven by this circuit).

A more elaborated schematic of what I meant is the following (with the motor part heavily simplified): 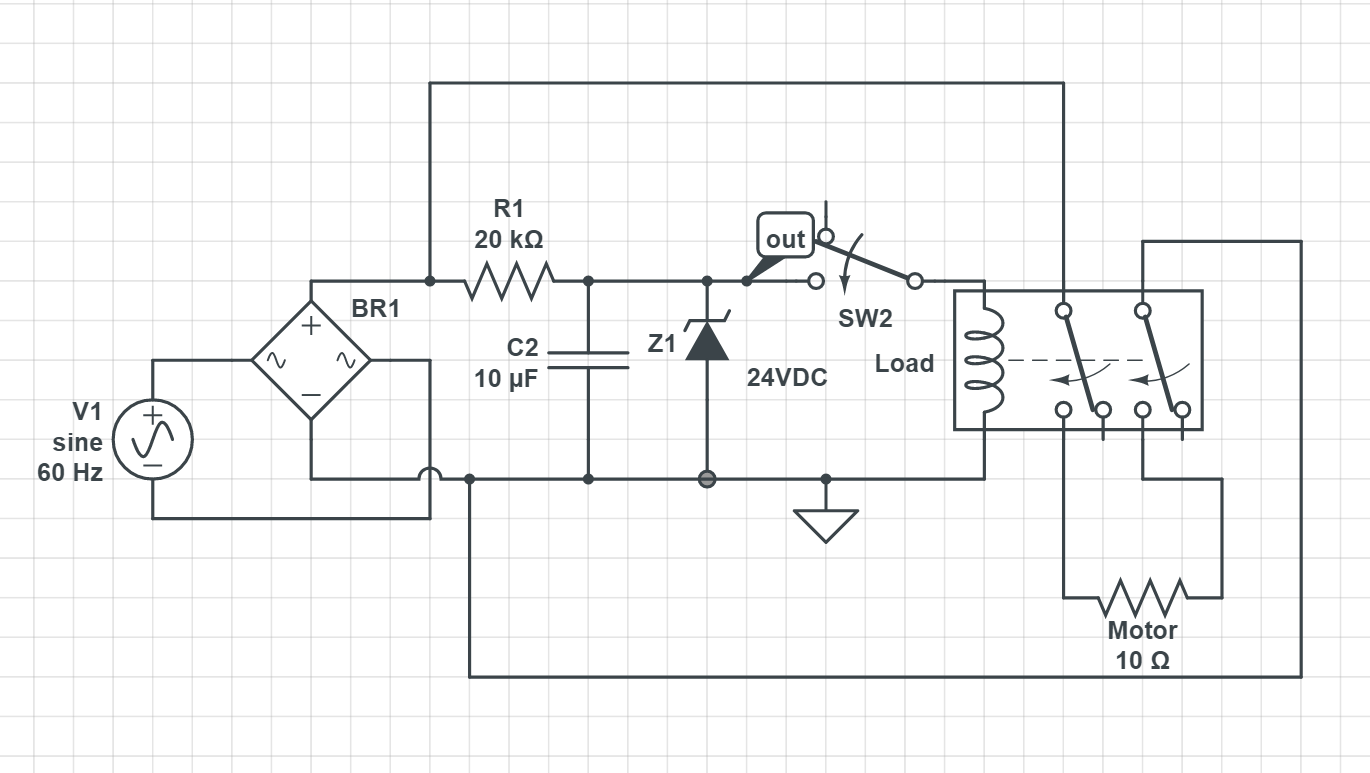 I have been running some simulations and it seems that this topology is unsuitable. The LY2 24V relay I was planning to use has a coil resistance of 650 Ohm, resulting in a current of 37 mA when switched on. This produces a large voltage drop on the R1 resistor (and thus a large power dissipation). This causes the Zener to work below Vz. If the value of the resistor is reduced, the Zener voltage increases but also the power dissipation in the resistor.

The schematic is publicly available here.

As suggested in the comments, using a switched-mode power supply (SMPS) might be the way to go. I am still not sure if it will work correctly with a rectified voltage as the input.

It seems that this enclosed AC-DC converter is suitable for the application.

Not the answer you're looking for? Browse other questions tagged motor zener bridge-rectifier transformerless or ask your own question.