I'm trying to troubleshoot a (bass) guitar amp of mine. The output should be clean, but it distorts at VERY low levels. I pulled out the pre-amp board and determined firstly that the distortion is happening there, so I used an audio tracer (small amp/speaker with probes) to follow the audio signal. The preamp is divided into several stages: input/gain, bass+treble EQ, parametric EQ, then it splits to a inverter/buffer for balanced line out, and a class AB amp -> headphone output -> resistor divider -> power amp output.

I found the distortion coming from the output AB amp, so I hooked up a scope to the input/output of this amp, feeding the whole thing with a sine wave audio signal. Input was a clean sine, output showed only the negative half of the sine, but "compressed" horizontally. The peakes lined up with the input peaks, but the width of each negative half was about half the width, centered on the middle of each sine.

The amp layout is a pretty standard AB amplifier with BC547/557 transistors, 2x 1N4148 biasing diodes, and the whole thing wrapped in the negative feedback loop of a TL071 op-amp (output connects between biasing diodes, and AB output goes through resistor divider back to negative input of op-amp. 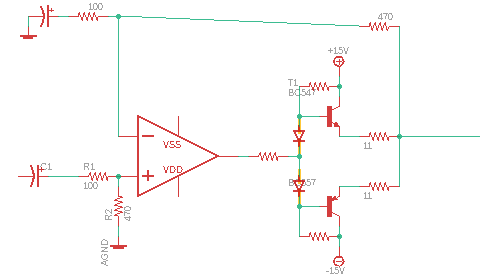 (not all values are labeled, I made this originally to better visualize what was going on)

I gathered from the scope output that the problem lies in the positive half of the amp. I replaced the transistor with a new one, but no effect, and pulled out the diode and tested it, but it passed all the tests (proper forward voltage drop, open circuit in reverse). Out of curiosity, I tried putting a short piece of wire in place of the diode, and suddenly the amp worked seemingly perfectly, even though the diode works, and I also tested with a new diode, but no change.

The amp seemed to work perfectly with the wire replacing the diode, so I left it in and put it all back together. But now, it's really bugging me WHY that worked, and what the problem actually is. Would someone be able to shed some light and help explain this to me? An idea I just had as I was writing this is that maybe the resistor connected to the positive supply is dead, preventing the transistor from getting proper voltage to turn on, and when I replaced the diode with a jumper, the op-amp started feeding the NPN base with the voltage required to turn it on. Any clues? Basically, what I'm wondering is if it's actually a problem to leave it as I changed it, or should I really keep diagnosing it? Thanks in advance!

(I am not an EE major, just hobbyist, most experience with digital circuits, so some analog stuff I still don't understand completely.)

The opamp can power the transistor's base through the wire, but not through the diode, which is in the wrong direction. As you noticed, this points to one of the resistors between the transistor bases and the supplies being open circuit, so no current flows in the diodes, and they can't do their job. So you can check and replace the resistor.

With the wire instead of the diode, it will increase crossover distortion since the opamp has to yank the bases by 0.6V every time there is a change in current polarity.

Not the answer you're looking for? Browse other questions tagged amplifier repair debugging or ask your own question.

3
Is this class AB design OK? I get distortion at the output
8
How do diodes and capacitors reduce Crossover distortion?
3
Audio Amplifier Repair Explanation
3
Class A amplifier asymmetric distortion mystery
0
class AB audio amp clipping vs. heat
1
Remove DC offset from op-amp output to allow increase in gain
4
Which is broken, the amp or the driver of this subwoofer?