While looking at this simulation, as they say no current flows at the non inverting terminal of the op-amp, but looking at the differential stage of the operational amplifier shouldn't there be some current from ground to -15V point THROUGH THE NON INVERTING INPUT?

Secondly, they define common mode impedance as the impedance between the input terminal and ground point. 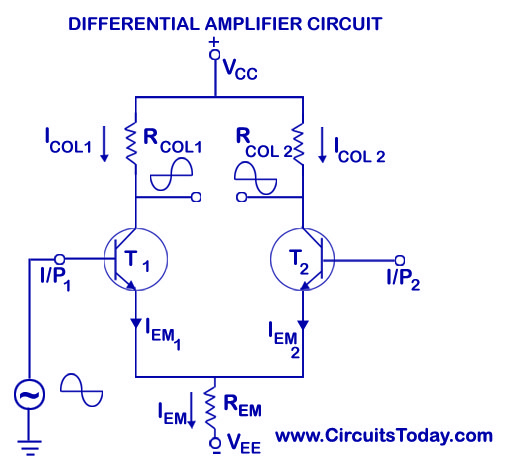 Now the current producing by the action of the AC voltage source has to travel from -VEE to ground. So the impedance should be of this path, then how impedance between ground and terminal is defined as the common mode impedance?

There is a small bias current that flows into the input, less than 1% of half of Iem at balance, for transistors with hFE > 100.

Common mode input impedance will be very high because that bias current does not change much with small changes in input CM voltage.

In many cases you can ignore both input bias current and input CM impedance when modern op-amps are used with resistors in the few K ohm range, but it doesn’t hurt to run the numbers and establish that for a fact.

Common mode means that both inputs "move" equally up or down.

To keep this simple, start out by imagining both inputs to be the exact same voltage (same source, even) and midway between the rails. In this case, both BJTs will share equally the current generated in \$R_\text{EM}\$. The split currents will generate their respective voltage drops across \$R_{\text{COL}_1}\$ and \$R_{\text{COL}_2}\$ and therefore the differential output between the two collectors will be \$0\:\text{V}\$.

Now, imagine that the two inputs (both moving identically, still) move slightly upward. When that happens, both emitters are also dragged upwards, too, and equally as much. This means more current is induced in \$R_\text{EM}\$. This current splits equally, again, between the two BJTs and, again, there is no difference in the output taken between the collectors. That's good.

But what change in current is incurred at each base? Well, each base will require a little more recombination current because the collector currents increased (by about half the current change in \$R_\text{EM}\$.) So it's pretty easy to see that the sources will "see" an impedance (the slightly changed voltage divided by the slightly changed base current.) Roughly speaking, and ignoring the Early Effect, this will be on the order of \$2\,\beta\,R_\text{EM}\$ for each input and is therefore considered "high impedance." (The differential impedance is, conversely, quite low. But that's another story.)

It's not quite so often that the common mode impedance is spoken of as more than "it's high," though. (These are usually driven by significantly lower impedance sources.) Instead, the CMRR is usually more important to know. In theory, this would be infinite as both collectors would move equally for any common mode change (assuming also that the resistors were ideal and exactly the same value, of course.) But the reality is that the BJTs themselves are never perfectly identical to each other and the resistors won't be perfectly matched, either. So there will always be some non-zero output difference to start out as well as some further change in that non-zero output difference when the inputs move identically together up or down. And that kind of thing is often more important to know about.

Not the answer you're looking for? Browse other questions tagged operational-amplifier common-mode diff-amp or ask your own question.

4
Is it possible to make a non-inverting difference amplifier?
4
common mode ground
0
Selection of filters (common mode and differential mode)
3
Common mode inductors with high pulsed current
1
Input Impedance of Noninverting Amplifier
6
What Reference-Potential does an Operational Amplifier use as “Ground”-Potential?
0
Operational Amplifiers
0
Common mode input impedance
0
Opamp input offset voltage…common mode?
2
What actually is the differential gain of an operational amplifier and why does its value change when we consider the common-mode gain?