The following is given as an example of a negative feedback loop in my textbook, note that the op-amp is assumed to be ideal. 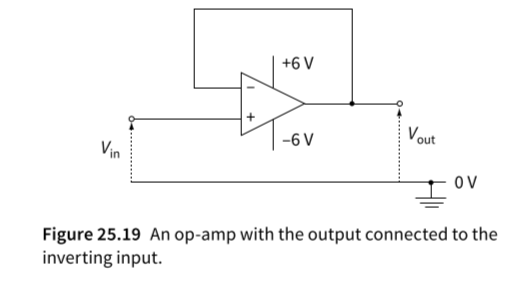 However I do not seem to understand the logic behind this acting as a negative feedback loop.

How is this considered a negative feedback, am I missing something crucial?

this process shall repeat over and over again. Would the circuit then just cycle between being +6V and −6V until the power supply is disconnected?

No. As you noted, each time around the loop the input difference is less. Eventually the output is essentially equal to the input and the circuit is stable. What you are describing actually happens. If you look at opamp datasheets, particularly "high speed" ones, there usually is a scope shot showing the "output settling time". Because it takes a finite length of time for changes at the input to appear at the output, you can see the loop settle in real time.

The output never truly equals the non-inverting input voltage. There is an input offset voltage error. Think of this as a microvolt-to-millivolt sized battery in series with the input. The output goes to wherever it needs to go such that the input differential pair is happy, but the two base-emitter junction forward voltages never are exactly equal, and this shows up as an error.

Not the answer you're looking for? Browse other questions tagged voltage operational-amplifier negative-feedback or ask your own question.

3
Understanding Op-amp Negative Feedback
0
Differential gain of an op-amp and feedback
5
How does the op-amp stabilize?
2
Understanding balancing resistor in bipolar op amp
1
Analyzing current-series negative feedback using voltage gain confusion
0
What's the tradeoff of amplifing the output of an inverting op-amp in software vs using a higher feedback resistor?
5
In a negative feedback loop, why does increase in v_out lead to increase in v-?
5
OpAmp with common-mode voltages and zero feedback current
4
In an astable multivibrator, why doesn't negative feedback prevent the output from ever saturating?