Use different capacitor for subwoofer

I got a broken subwoofer from a friend of my dad.

It has a build-in amplifier. During testing we came across some problems, most of which we solved. But during these tests, out of the blue, something began smoking. It was around the capacitors. We tested the capacitor and noticed it was broken and since then I have been searching for one with the exact same "specs" (I'm not really familiar with all the terms used for these parts), but we had a hard time finding them.

I've been doing some research online and found a lot of questions about capacitors for monitors and TVs, where they said you can vary a bit in volts or farad.

Does the same go for subwoofers? I included a picture of the capacitor we took out of the subwoofer. 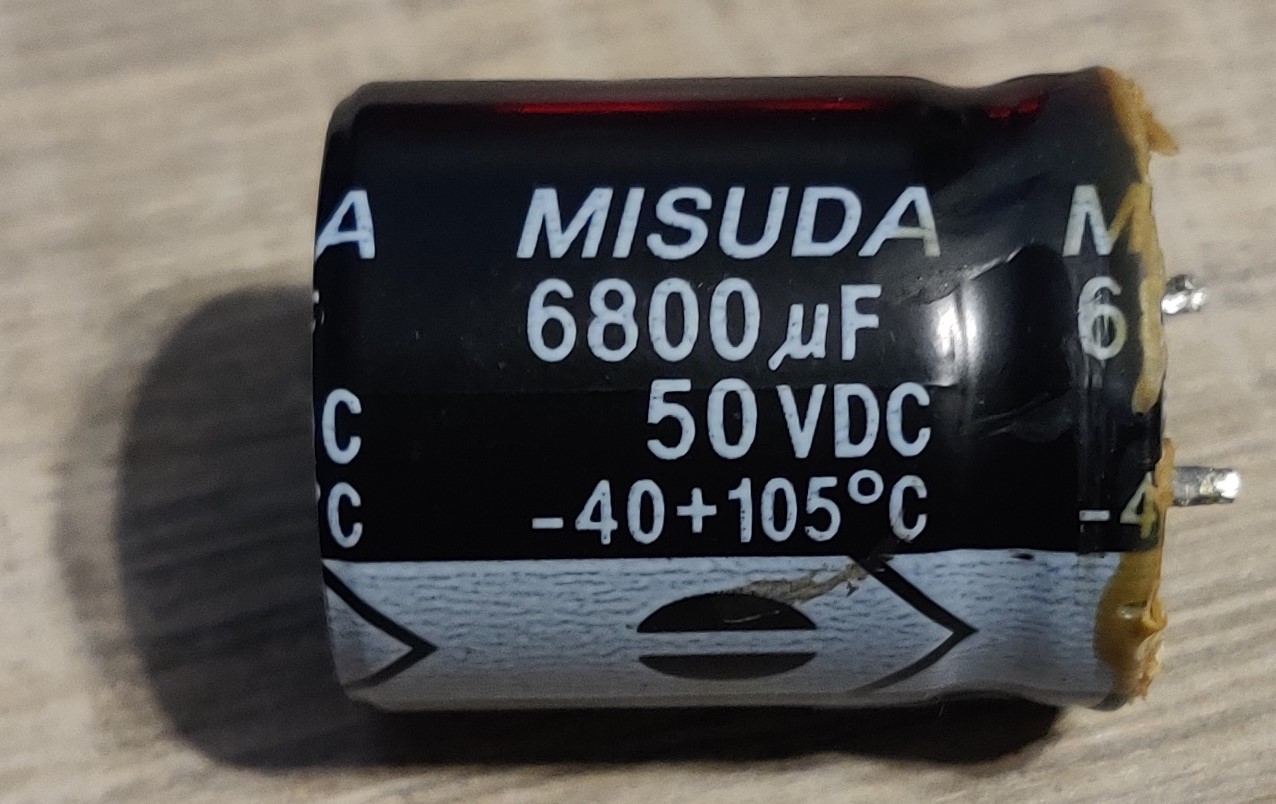 The reason why I want to know if it can vary in, for example, volts, is that I have found a lot of 6800uf 63 VDC capacitors.

I hope someone here can answer my question. I have been stuck with this problem for almost half a year now because of the capacitors from Amazon.

Edit:
I want to thank you all for helping me out. altough i searched a lot I never came across the site of Farnell, where I found one with the same farad and volts. Also thanks to all of you I now understand a little more about these parts. As recommended I will check the voltage of the cap, as well as the rectifiers.

I sincerely thank you all for helping me out and if interested, I can update this question when the new capacitor is attached to the subwoofer.

Edit 2: Hello again,
After attaching the new capacitor we came across a new problem, a part which I think they call an amplifier, began smoking as soon as we turned on the power. So apparantly the capacitor wasn't the part which was smoking. Now again the question, does anyone know where I can buy the exact same one as I took off? A picture of the one we took off is displayed below. I thought I found one but some letters don't match. What do all the letters and numbers on this piece stand for? And does it matter wheter I buy the exact same one or one with little different letters? 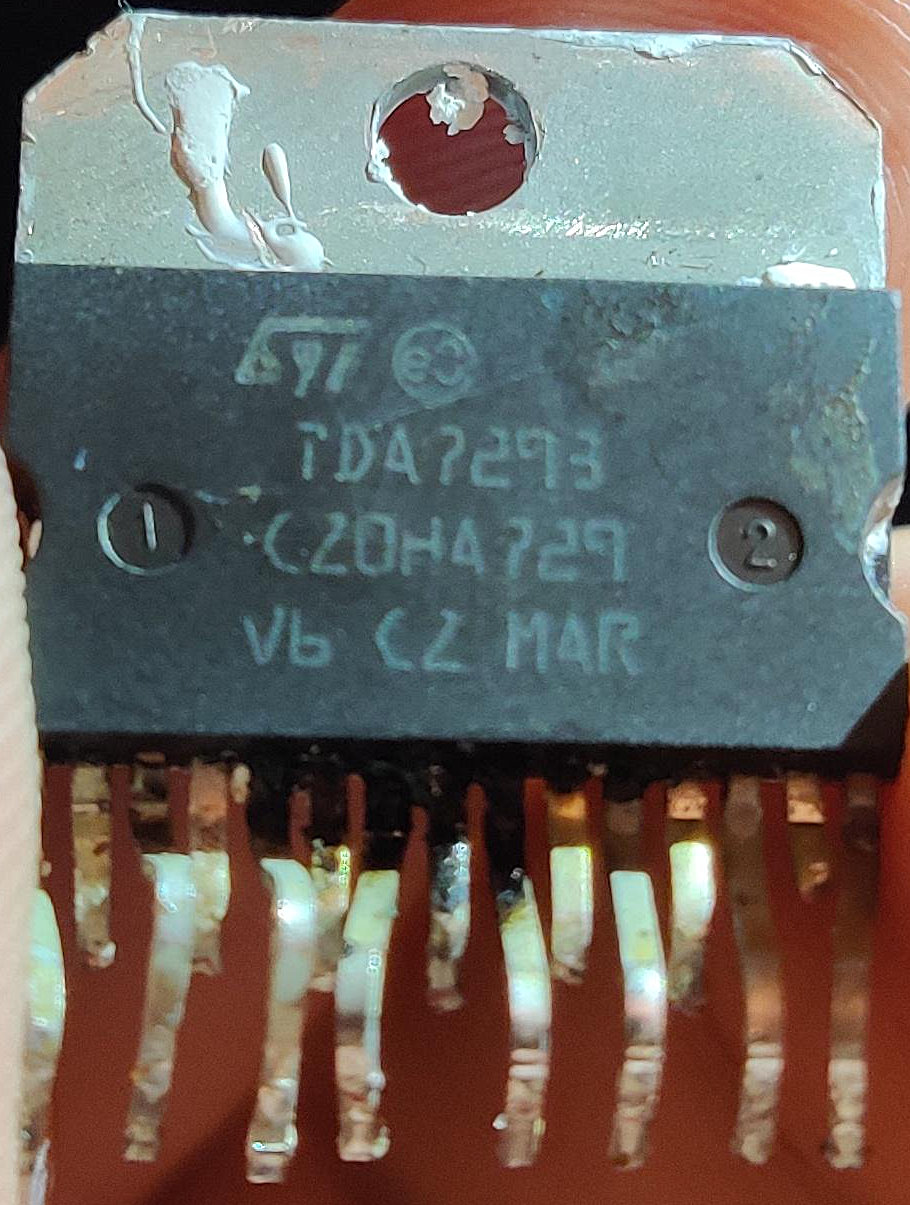 Here's the link to the one I found for the people who understand Dutch: https://nl.grandado.com/products/1-stks-partij-tda7293-tda7293v-zip-15-ic

I suggest you avoid Amazon for any technical parts. Cheap teacups or even computer monitors -- yes. Any component where performance matters -- no. Check with a distributor -- DigiKey, Mouser, or Newark in the US, Farnell in Europe, and I don't know who to suggest elsewhere (sorry).

And does it matter wheter I buy the exact same one or one with little different letters?

It's a TDA7293, an audio chip amp from ST. It's usually pretty robust, being internally protected against short circuits, but I've managed to blow some when they oscillated. So, the protection is not foolproof.

Still, before replacing it, you should first ask yourself if the thing you're repairing is worth the hassle. Then use a multimeter to measure all the power supplies and verify that the correct voltages are supplied to the chip, before you put the new one in. The list of pins and allowed supply voltage is in the datasheet. Also check if there is a short circuit on the output, who knows.

Also check if the loudspeaker still works. It would be a bummer to repair the amp, then find out the fried amp had also fried the loudspeaker. So, measure the loudspeaker resistance with a multimeter. You should find something close to 3 ohms if it's a 4 ohms speaker, and 6 ohms if it's a 8 ohms speaker. If it is shorted or open circuit, then the poor speaker is finished. Also press (gently) on the speaker membrane to check if it moves well, you shouldn't hear any scratching or other suspicious sounds indicating a melted or or deformed voice coil that rubs against the magnet. You can also disconnect the speaker from the amp and apply some low voltage like a 1.5V AA battery on the speaker terminals. You should hear some noise from the speaker.

The 50vdc vs 63vdc is the isolation rating, as long as it's higher than the one you took out it will be better than fine, it might not fit the pcb and you will likely have to bend it's terminals a bit and have it "hover" over the board but it will work.

I should add that there might be some characteristics that will be different (most likely it's internal resistance), but given that it's such a large value, I would hazzard a guess that the amp is a class a-b with a non-split power source, and that the difference in internal resistance of the cap will be inmaterial on this application.

Not the answer you're looking for? Browse other questions tagged capacitor amplifier or ask your own question.