Strange circuit design for driving a fan with PWM

I've recently attempted a repair on a cooling fan circuit in a hard drive enclosure that has me somewhat baffled. The fan is an AD08012HX207000 with a connection for two wires. The circuit that drives the fan supplies 12V to the positive pin, and the negative pin is driven by the circuit below. The circuit appears to take the 3.3V PWM signal from the MCU, reduces it to ~1.6V to drive the base of a low voltage, high current BJT transistor. The transistor provides a path to ground when the base is driven high, and the fan can spin.

I'm not really sure what the 47uF capacitor is for. Smoothing out the PWM transition when the fan changes speed? When I probe the capacitor I see a square wave at 12V, and my sense is that the capacitor is charging to 12V, at which point the fan is off because the voltage on both sides is the same, and then discharging, allowing the fan to spin again, but I have no idea why it's connected via a 4.7k resistor to MCU power.

Here's a shot of my oscilloscope probing the pin of the capacitor that is connector to the fan negative: 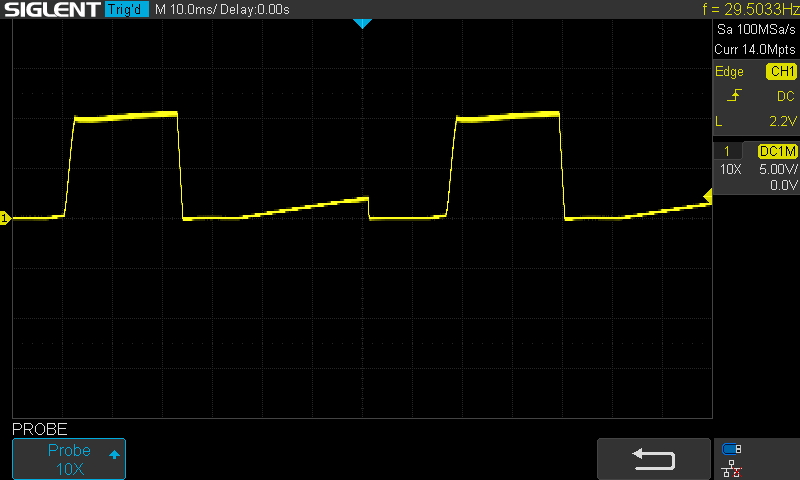 If I remove the capacitor from the circuit, and connect the fan negative directly to the emitter of the transistor, I see this: 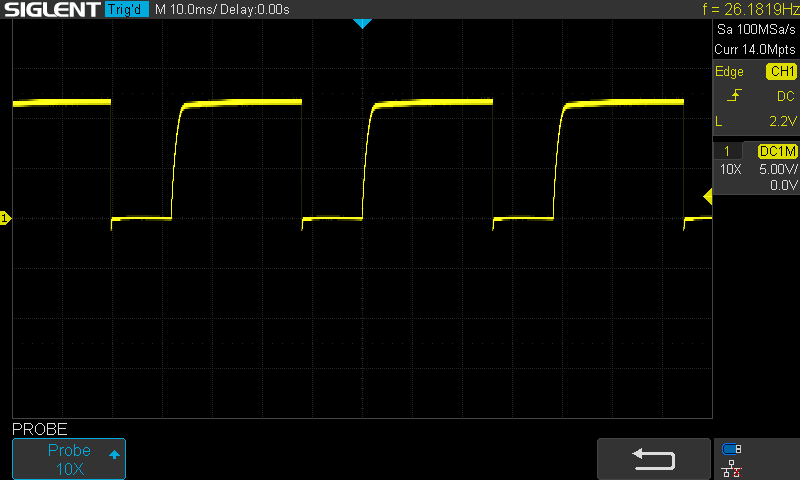 I guess my questions in order of importance are:

[edit] just to clarify a bit, what I'm trying to "repair" is the fact that the fan spins very slowly when connected, and only on the highest setting. I've actually tested this fan with a simple PWM circuit coming from a 555 timer, and it doesn't really seem to like being drive by PWM very much. It basically maintains a constant speed until ~50% duty cycle and then turns off, which makes me think that it has some sort of internal regulation that is interfering. The manufacturer sent me this fan as a replacement, and my growing suspicion is that they sent me the wrong one and the circuit is actually working fine. I've lost the original, so I can't use it for comparison. All of that aside, I want to understand how this circuit works for my own edification.

Turns out the schematic above was incorrect. I've updated it to indicate that the capacitor is connected across the collector/emitter in case someone comes across this in the future.

Not the answer you're looking for? Browse other questions tagged transistors pwm fan or ask your own question.

2
Arduino controlled PWM PC Fan
1
Analog Fan control via PWM
1
Can a PWM fan be turned on and off with the control pin voltage?
1
Fan PWM driver - design question
5
Can PWM affect a brushless DC fan given sufficient time?
1
4-pin PC Fan PWM control and speed monitoring
0
Controlling DC fan with Mosfet PWM
1
How to run a PWM controlled fan at 100% all of the time
0
Fan does not spin when controlled by PWM