I'm currently doing some work on the PCB of my old Amiga 1200. In order to play some games I want to revive it by installing a scandoubler/flickerixer that I bought to basically be able to connect it to modern monitors and add some other addons like an internal IDE to CF converter, do some retrobrighting of the case and so on.

The computer had a leaky capacitor that needed to be replaced. So I thought replacing all electrolytic capacitors would be a good idea, I've already removed any electrolytic caps, both SMD and through hole ones. And I also removed the RF modulator can, which I think didn't work even back then, and I don't think I'll ever use this computer on an old TV with an RF antenna jack anyway. But I need that space in the case to put a VGA or DVI jack there.

So I got the schematics for my revision of the A1200 from the schematics page on the Amiga wiki. And after removing the RF can I noticed that quite a few electrolytic caps are for the RF circuit, mainly AC coupling and decoupling to ground. So I thought, why adding new capacitors that basically aren't used anyway, it only adds a part that can potentially leak (though less likely if not used).

But do they really serve no purpose even with the modulator removed? Now here's the dilemma, I have quite some gaps in knowledge when it comes to electronics and I noticed something in the schmatics which made me wonder about something. The composite output CV_OUT is split at one point before C236 and C237, it goes to the RF modulator and to the composite output jack. What I'm worried about is the voltage level for the composite output. Will removing the modulator and the capacitor raise the voltage for the composite output and thus distort the signal or make it too hot? Do I need to replace R234D with a different value resistor? Does it even have an effect? Or is it only there to protect the polarized capacitor C237 from heating up if it degrades from the constant flow of DC?

Also should I remove the resistor E232R to disconnect the components E232C, C239 (already gone cause it's an elcap) and R236? Wouldn't that part of the circuit just use up power or introduce noise to the ground plane or oscillate or some other weird stuff? (I have no clue) It's certainly not needed because the modulator is gone, but if it's not an issue I'd rather not desolder those components.

Here's the relevant section of the schematic: 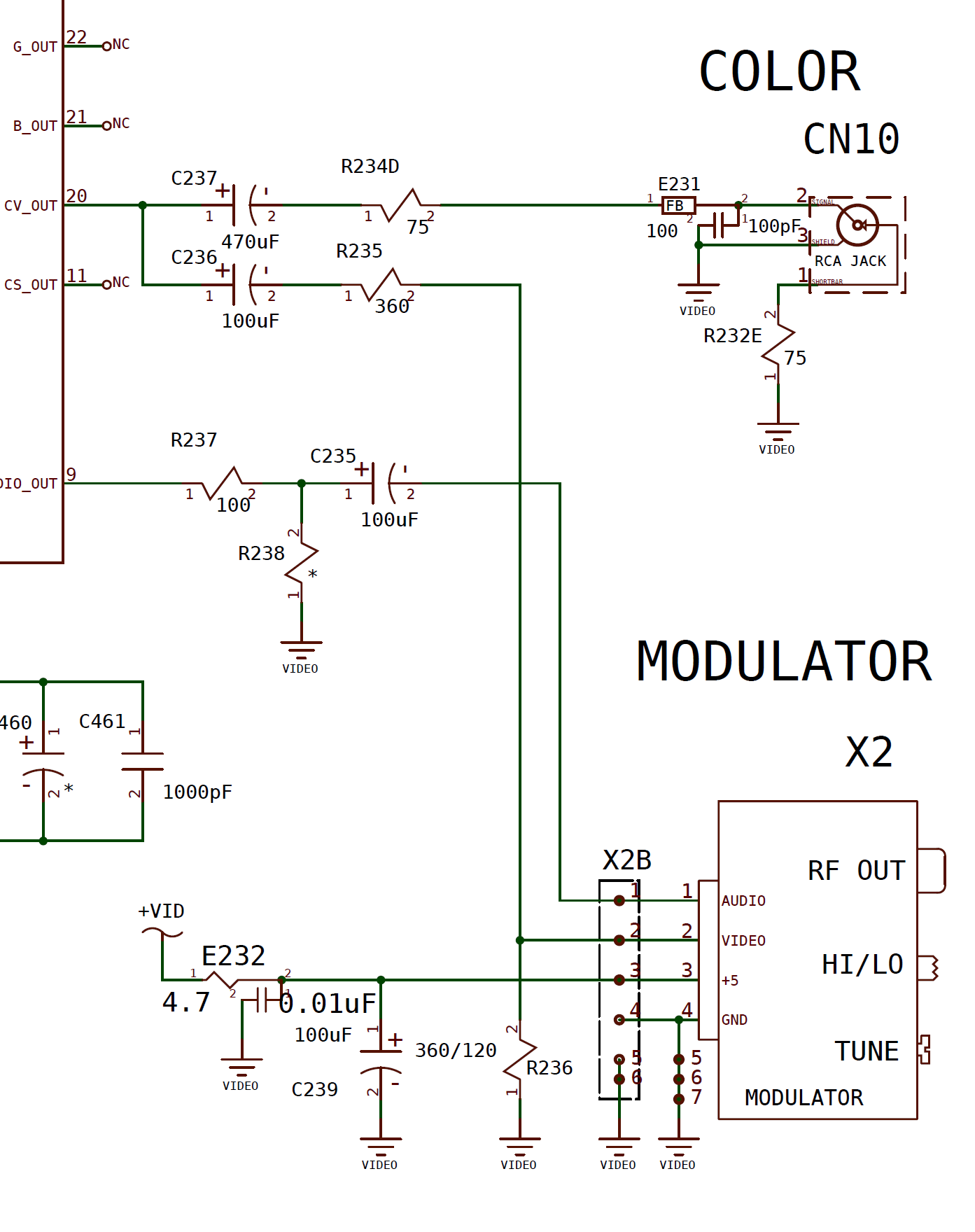 Pin 20 of the Sony CXA 1145 has a buffered output, so the amplitude of composite video signal stays the same if the modulator is disconnected.

Not the answer you're looking for? Browse other questions tagged voltage circuit-analysis or ask your own question.

0
Deactivating RF modulator circuit, should I cut off the supply voltage as well?

0
Working around voltage drop in a classic BMW
8
What is the minimum required voltage for charging a 3.7 V Li-ion battery?
1
Question about this RC circuit and voltage across the capacitor
3
why do rectified voltage boosts after adding a capacitor?
1
How unstable can digital supply voltage be?
2
Different results for different parallel ports, same circuit. why?
0
Astable Multivibrator Doesn't Vibrate
0
Role of the output capacitor in buck converter in terms of frequency
0
Capacitive dropper power supply for LED - zener/decoupling capacitor?
0
Circuit only works while touching the ground