Why split the resistance on either side of an LED?

In the circuit below, is there any reason why we can't combine R1 and R2 into one 4 kΩ resistor in either location? 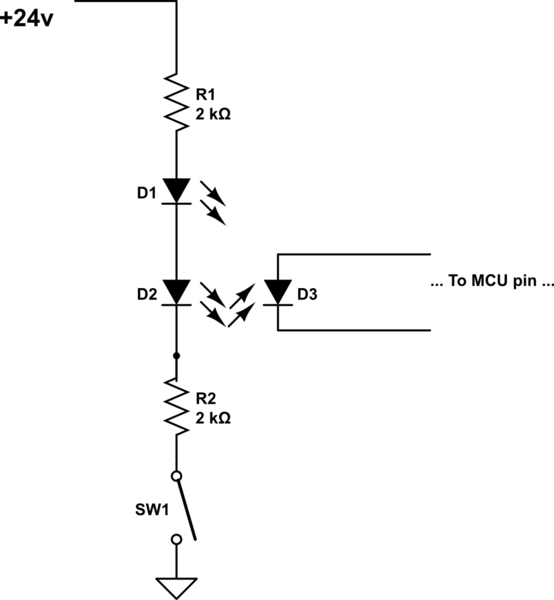 I am reverse engineering a window controller board, which is no longer available.

The board has three input switches powered by an unregulated 24 V supply using this circuit to level-shift the inputs to the MCU's 3.3 V input pins. D2 and D3 represent an optoisolator (1/4 of LTV-846s). D1 is a visible LED that indicates when the input is pressed. R1 and R2 are 1/4 of a 8-resistor SOIC-16 SMD package (Bourns 4816P-1). Since there are three of these circuits, two of the resistors in the package are left unconnected.

I thought maybe it would be for power dissipation but unless I am making a stupid mistake, it's only dissipating 1 milliwatt which even small SMD resistors could handle.

I am going to use the same optoisolators (LTV-846s) in my new replacement board. Am I risking anything by replacing that resistor network chip with three 4 kΩ 0805 discrete resistors?

Question 2: I would be tempted to get rid of the level-shifting circuit and just use the 3.3 V supply for the switches. If the 18 AWG wires to the switch are at most 100 ft, would it be a problem to use only 3.3 V? (I think that's about 1 ohm and 1 nF in 100 ft of wire). Would I be risking activating the input, from noise picked up from the wire?

I'd say that given the cost-to-benefit ratio, the optoisolators are the cheapest means of implementing lots of functionality while also providing lots of peace of mind. I'd also add a reverse voltage protection diode - 1N4007 backwards across the series-connected D1-D2, so that the reverse voltage seen by the LEDs is always clamped.

BOM optimization is a likely candidate. The value 2k is probably used elsewhere and adding another value would mean one more line on the BOM and one more slot in the pick-and-place machine.

Another BOM optimization could be availability. For example two 0603 resistors are easier to source than one 0805 (for power handling). You mention an eight resistor in SOIC-16. That’s certainly odd, but if you needed that special type of resistor elsewhere, you had two of the available and the layout allows it, why not use them and save a few cents?

If either side of the LED is shorted to either supply it will probably survive with two resistors. With only one, it probably won't.

If the circuit has to be resistant to "knuckleheads" perhaps the 0.1 cent for the second resistor was deemed justified.

Edit: The comment from mkeith is also very much valid. If you keep the number of different parts down it can help reduce the product cost- the number of feeders on an SMT mounting machine is limited and you may also want to avoid having to add a new part to inventory, especially if you are making less than a few thousand pieces.

Is there any reason why this circuit would need two 2k resistors instead of one 4k resistor?

I thought maybe it would be for power dissipation but unless I am making a stupid mistake, its only dissipating 1 milliwatt which even small SMD resistors could handle.

I would be tempted to get rid of the level shifting circuit and just use the 3.3v supply for the switches.

Although it is not clear how the ground is related to the +24V, I would guess that the circuit is basically "current loop". Current loop has a high immunity to induced voltages. If you connect your switch to the MCU directly through a 100 foot cable, (you would also need a pull-up or pull-down resistor) it will be the voltage at your pin that is important. Your noise immunity will be gone. Additionally, you risk damaging the input pin of your MCU (or more) if there are induced voltages that bring the pin beyond its rated voltage. I would stick with opto-isolation.

Would I be rising activating the input from noise picked up from the the wire?

Use twisted pair, to minimize noise from the long length of wire. Any cable rated for RS422 or RS485 should be fine. If you happen to have spare ethernet cable, that will work also, but has more conductors than you need. Even telephone cabling should be fine.

The resistors are split for better common-mode transient immunity (CMTI), i.e. for better separation of the two supply domains. The two sides are galvanically isolated, otherwise there would be no reason to use optodiodes (=isolators).

If there is any noise (more like disturbances caused by motors, or high current fast circuitry) on one of the supplies, then it will galvanically couple to the other side through the capacitances between the two supply domains. In the following analysis I will assume that there is one equivalent capacitor from the secondary side to both the anode and the cathode of the optodiode. The optocoupler itself have such parasitic capacitors as well. Basically the problem is that the current through such a capacitor can turn on the optodiode, or it can steal current from it. Both of the cases lead to an erroneous signal.

The goal is to keep the current through the optodiode the same, regardless of ground bounce, or noise between the supplies. The optodiode can be thought of as a short when it emits light, and an open, when it does not. The ratio of the two resistors should match the ratio of the capacitors.

Note that this analysis is simplified, because it assumed that there is only one node from the other side with coupling capacitors, but in most of the cases it is fairly accurate.

You should know or at least have a guess whether CMTI is something you have to care for. Check the datasheet and application notes from the optocoupler supplier for information about the capacitance ratio. Even if it is not critical, it makes sense to split the resistors, to reduce this effects. This 1:1 split is probably something like that.

Also you should consider BOM simplification, which could save you some time to find the right resistor if you build a new one (or save a feeder and manufacturing setup, plus logistics).

This and this application notes seem to be a good starting point for reading about it. I remember an even better one, but I was not able to found it now.

I also would like to note for completeness, that optical isolation is kind of an old technology now. Even though there are efforts to increase its robustness and lifetime, there are other chip sized solutions. Probably capacitive isolation barriers are the best for price per performance ratio. These chips might have digital in- and output, integrated gate drive, or even secondary side DCDC controllers. All of these make the life of a designer easier.

I did this exact thing in a design for heat dissipation. But, my design didn't have a fixed voltage as input like yours, rather it had a wide input range.

Not the answer you're looking for? Browse other questions tagged led resistors reverse-engineering or ask your own question.

6
Possible uses of a MELF resistor?
12
Why is this resistor connected between connector shield and ground?
17
125 mW resistor subjected to 600 mW dissipation in professional safety system
1
How to identify the value of a SMD resistor soldered on a board and without marking?
15
Why would you put multiple resistors in line vs one resistor of the same value?
1
Why do different resistors of the same power rating burn out / not burn out?
0
Resistor getting hot - up to 50°C. Is it an issue of the resistor wattage or nature of the resistor?
0
Choosing the right resistor for a LED circuit
0
Why don't mass-produced LED chips burn out right away?