Is this power supply suitable for powering these chip on board (COB) LEDs?

Video review of the power supply.

This screenshot is from the LED datasheet 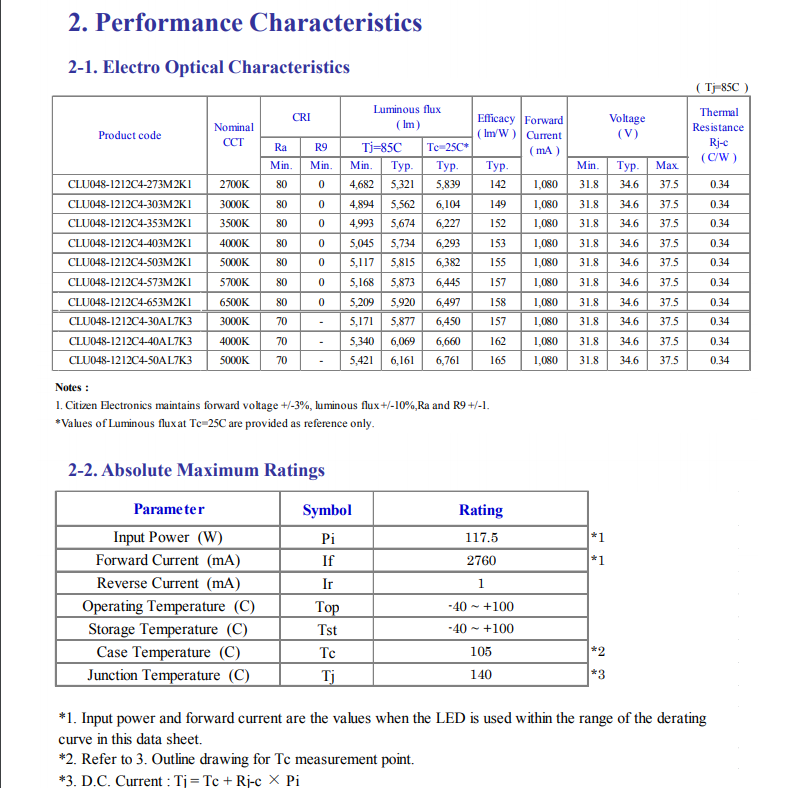 I saw in the power supply datasheet:

This screenshot is from the power supply datasheet 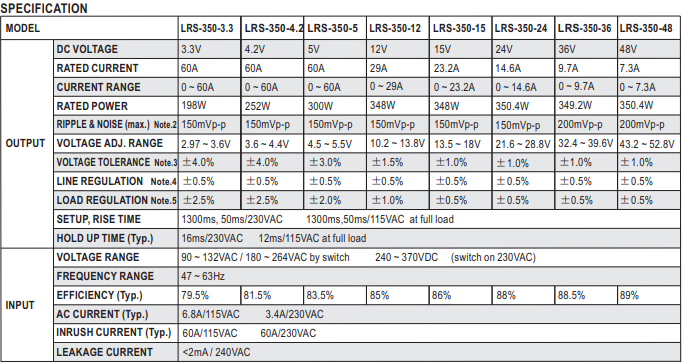 I think if I connect the LEDs parallel it'll be good because the current of the power supply (9.7A) will be divided on the LEDs count so every LED will take 9.7A/5 = 1.94A for each LED DC voltage 36V.

I feel confused from this screenshot from the LED datasheet.

This screenshot is from the from the LED datasheet 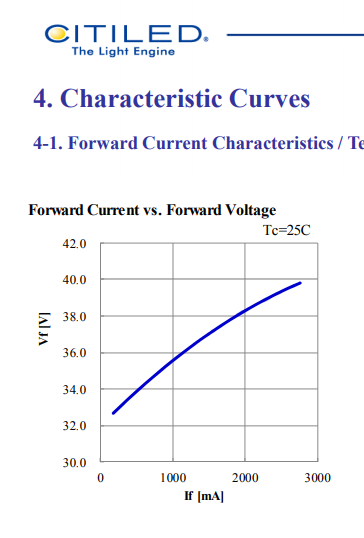 Well, since this project will make you blind, it wouldn't be complete without the risk of electrocution, so let's wire the LEDs in series.

As you noticed, the voltage across your COBs varies with current (and also temperature, and between each COB). So you can't drive them with a constant voltage supply, it has to be constant current. You can, perhaps, parallel them, if they are well matched, but that's pretty hazardous because when one COB fails open, then the driver will send the whole current to the others, so they will also fail in cascade.

So you want to run the COBs at around 2 amps, let's look for a constant current driver that will do that...

There are of course many more options regarding output voltage: higher means more COBs in series, and more dangerous.

Resistors waste power as heat, but they are the simplest way to limit the current.

The resistors (in total) also waste as much power as one LED would consume.

That is not efficient, but it is simple. Each of the resistors will waste 18 watts of power as heat - you need big power resistors to make it work.

That wasted power is the reason you should use proper drivers for each LED. Scaled up to your target 100 LEDs, that would be 1800 watts of wasted power.

Total power is something you need to consider, anyway. 100 LEDs at 70 watts each is 7000 watts of power. The outlets where you are can probably supply a bit over 3000 watts each. You'll need to get power from outlets on separate circuits in your house in order to properly drive all those LEDs without causing a circuit breaker to trip.

Given the size of the project and the cost of the LEDs (I figure close to $3000 just for the LEDs,) and the complexity of building power supplies, I'd suggest you look into purchasing proper constant current power supplies rather than trying to bodge things together.

Mean Well makes many other power supplies that would be better suited for your project.

The simplest (though maybe not the cheapest) solution would be to use individual 75 watt power supplies for each LED. You can adjust them to get the proper power output for your LEDs.

The ELG-85-42 would be the correct model. It will put out 1.8A of current at up to 42V. The voltage is determined by the current - it won't destroy your LEDs.

The downside is that each power supply costs as much as the LED it drives. The upside is that your LEDs will operate properly and won't waste a lot of power.

You've picked a very large project to start with. 7000 watts is a serious amount of power.

No matter how you power your LEDs, keep in mind that each of them is going to need a heat sink to keep it cool.

This is a 100 watt LED work light that I use around the house: 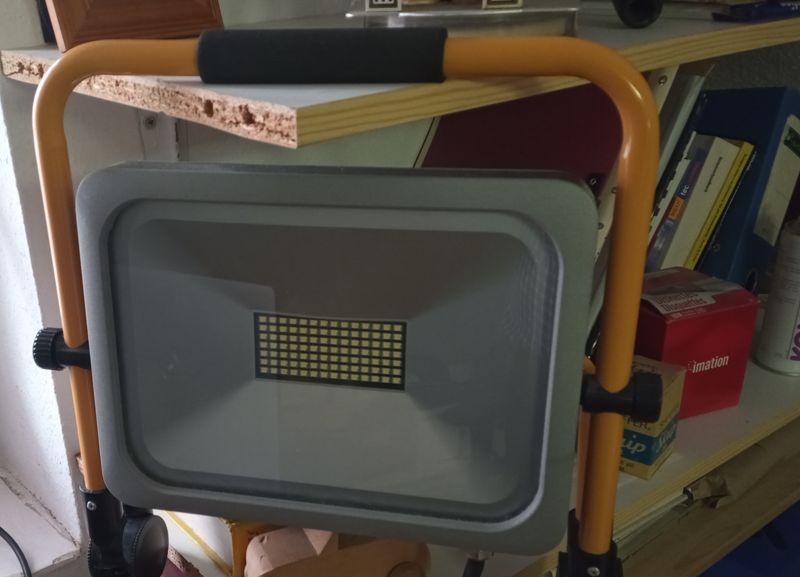 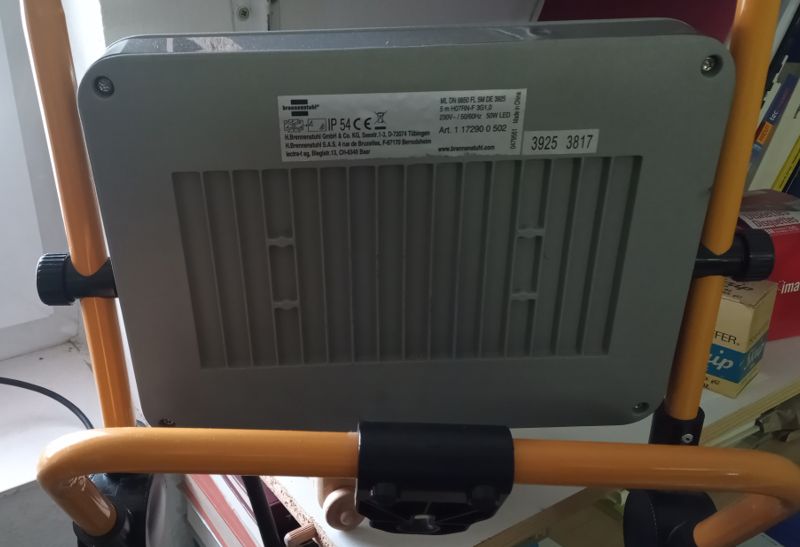 The housing is basically one enormous heat sink. It is made of aluminum, with the LEDs solidly attached to the back plate to carry off the waste heat from the LEDs.

Your 70W LEDs will require a large heatsink. Not quite as large as on my 100W light, but not small at all.

The OP has not yet given a user requirement of the venue for the 100 sets of COB LEDs, each set of 70W. This is easy to do, as we can easily find 12~24VDC 70W LED lamps. The following is an example.

I confess I have not answered the OP's question of whether his suggested PSU is good. Below is my reason.

There are three options for the OP:

(b) 110VAC/220VAC LED driver, eg Meanwell ELG-240-C2100, as suggested by #bobflux. This gives some flexibility of the COB LED configuration.

(c) 220V to 36VDC~48VDC PSU. I am not sure if the OP prefers low voltage PSU. I prefer low voltage PSU because I doing smart home light project, and I want to choose my CCS (PT4115E) for which I can fine tune the dimming/fade in/out to 1/5000 resolution.

Each of the above three options has its pros and cons. Perhaps the OP can tell us more of his requirements, and we can give more suggestions.

Well you LED module is COB (Chip On Board), which means the many LEDs are serially squeezed within one module. You might like to read this tutorial The Basics of Chip on Board (COB) LEDs - Rich Miron, Digi-Key Electronics 2016aug03 for more details.

Usually one LED taking 1A has a voltage of approx 3V. So your module has approx 36V at 1A, implies there are 12 LEDs in series inside the module.

What's the voltage used to power LEDs inside an LED light bulb? Asked 2 months ago Active 2 months ago Viewed 170 times

My answer explains that special AC mains to DC conversion uses the "Capacitive Dropper" accepts AC input in a range of 185 to 150VAC, like many smart phone chargers accepting 110VAC or 230VAC.

You are asking two questions, one on AC mains input. which I said it can be a wide range.

You other question is related to the DC voltage of the COB LED module (about 30V DC for a series of 12 LEDs at 1A).

Suppose now you want to use a DC voltage source to power the LED module of 12 LEDs, the standard trick is to use a CCS (Constant Current Source) of 1A, and the voltage source can be, a couple of Volts higher than 30V, perhaps 36V to even 48V. This is a bit confusing. You might like to get a rough idea by reading my answer to the following Q&A on how to use a CCS:

This is also a good newbie friendly tutorial on power LED.

Not the answer you're looking for? Browse other questions tagged led parallel led-driver cob or ask your own question.