Isn't conventional current supposed to go from high potential to low potential ? If yes, then why this rule is not respected in opamp using AC?

First, thank you for reading my post. I'm a beginner in electronics. I learned that conventional current goes from high potential to low potential. It has always worked for me in DC and even AC. But recently, i did see this rule being violated in AC, which i think is impossible...right ? To give you an insight, i have to tell you that i'm working with opamps. Here is how i see current direction in a non-inverting opamp configuration: 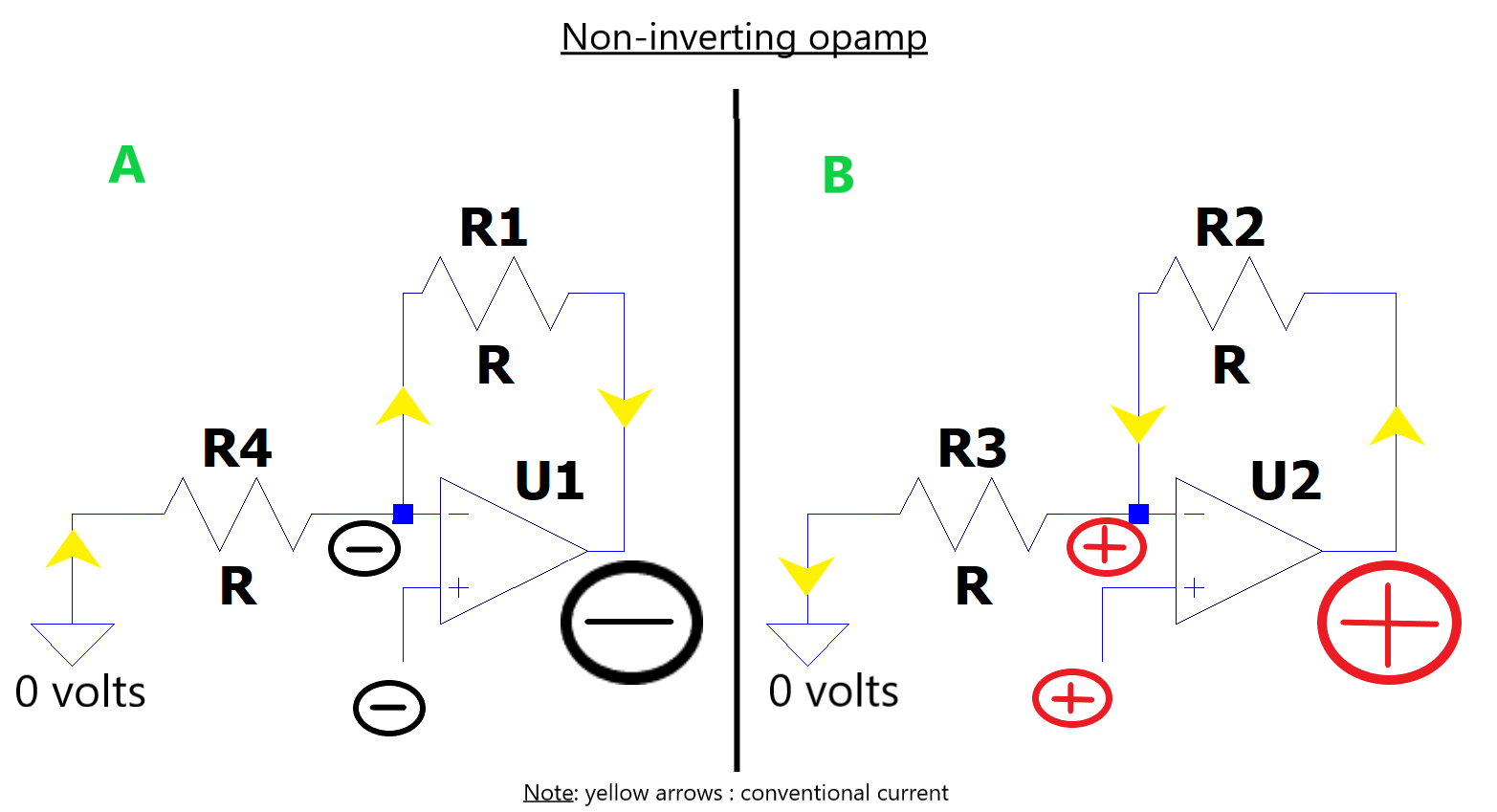 In part A, the output is amplified by a positive gain but because the input is negative, the output becomes even more negative. So, at that moment, the lowest potential in the circuit is the ouput, then we have the inverting input of the opamp that is at same potential as the input, and finally the ground being at 0 volts is the highest potential. So conventional current would flow from ground to the output of the opamp(vice versa for part B). You can see why on the following graph : 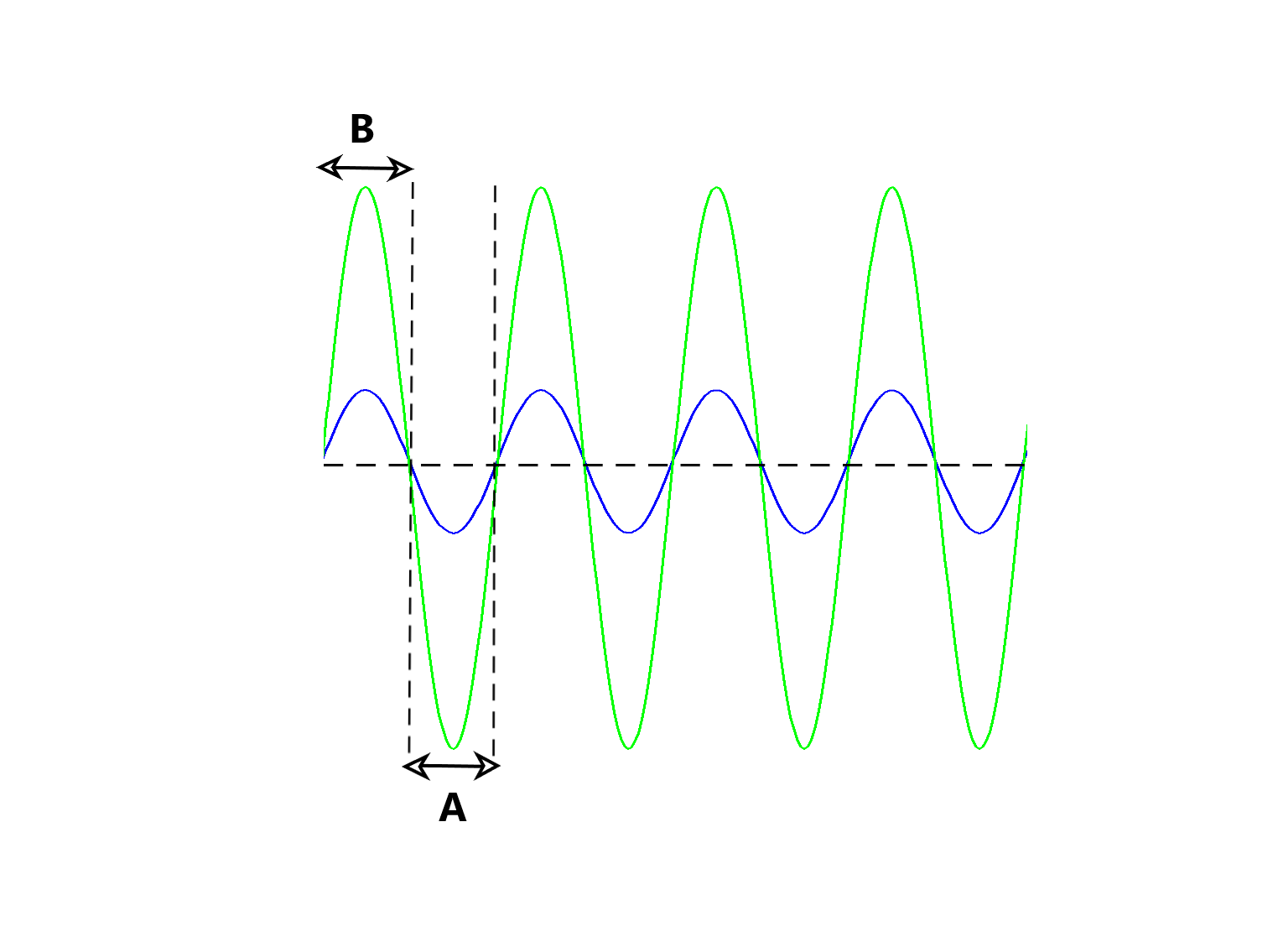 So i tried it on Ltspice: 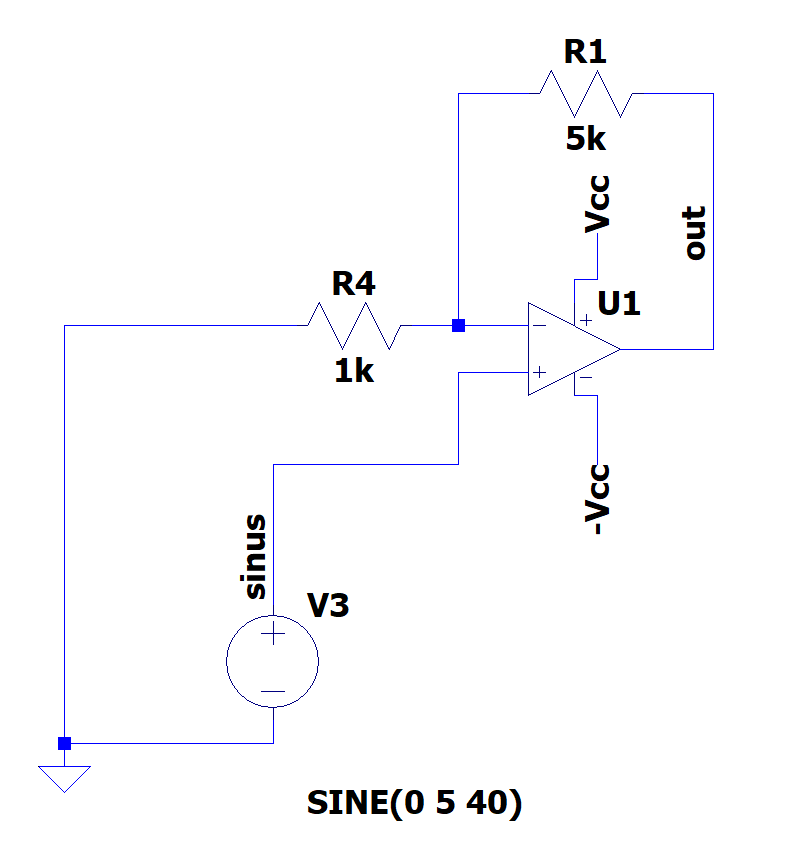 no problem it works. Current going through R1 gets positive and negative [-5mA:5mA] (so goes in the both directions periodically, so this is AC) : 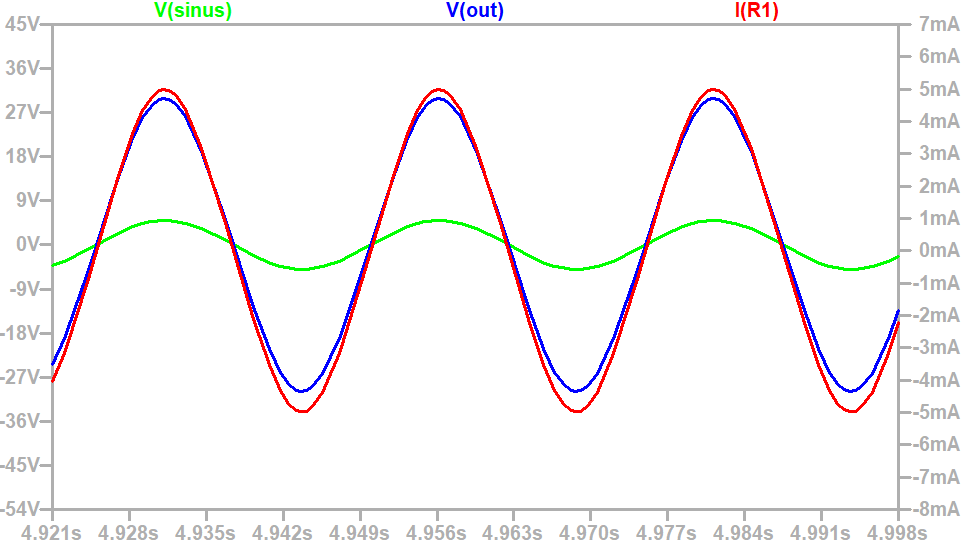 When i add an offset as such: 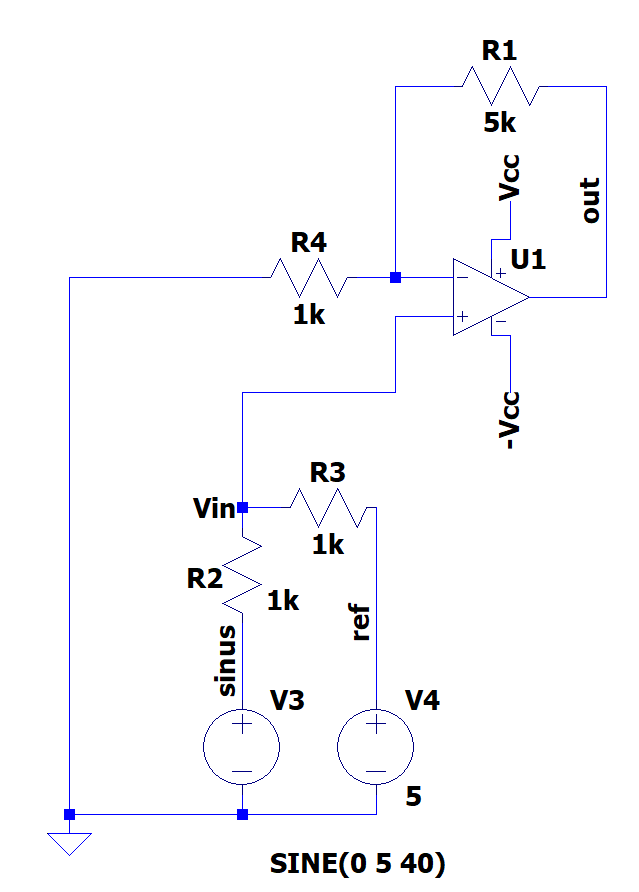 Output is always greater than the input, current is then only positive [0:5mA]( so it's DC), so it works: 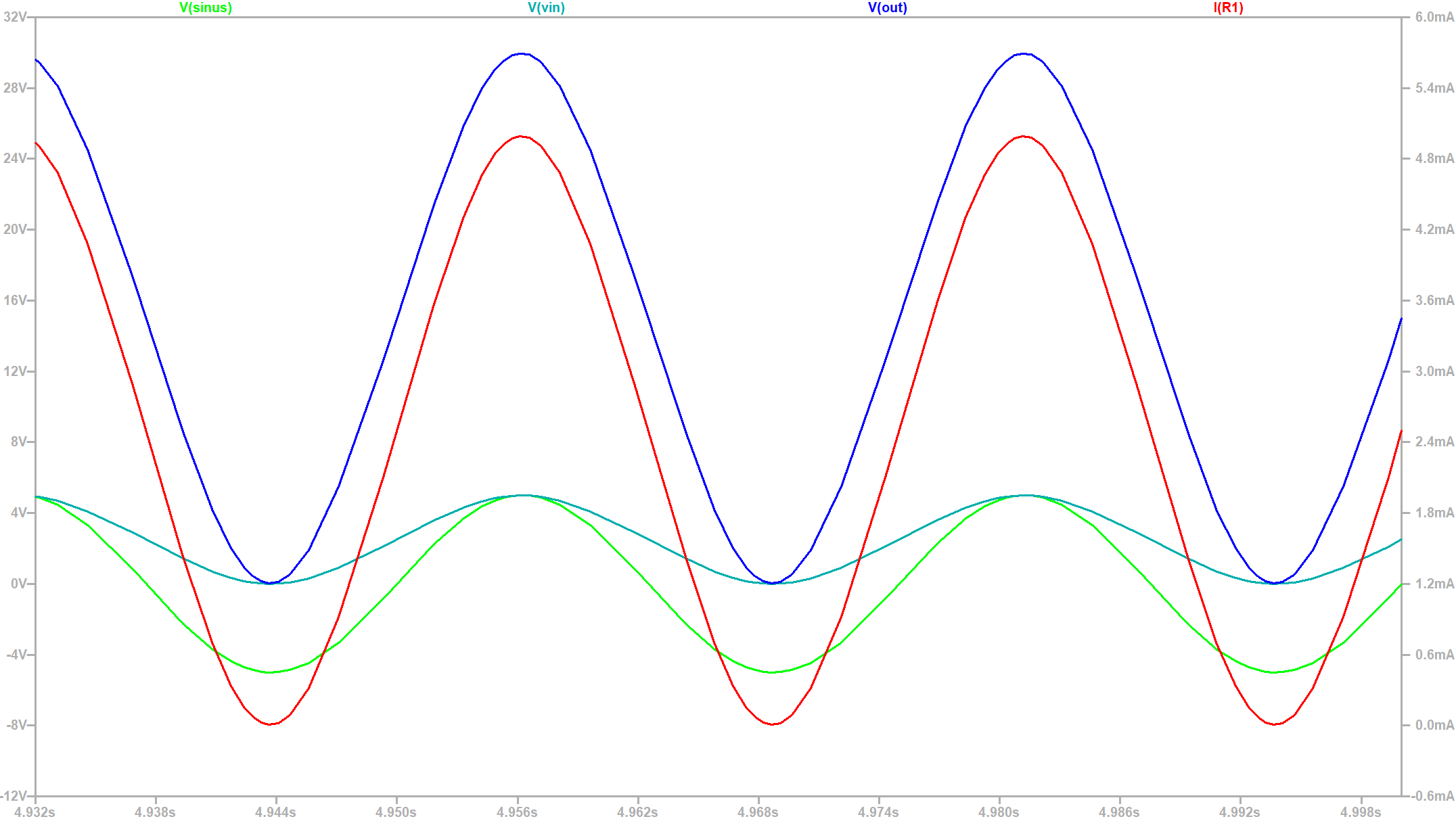 But when i try to add two capacitors in parallel with the two resistors (in the feedback) : 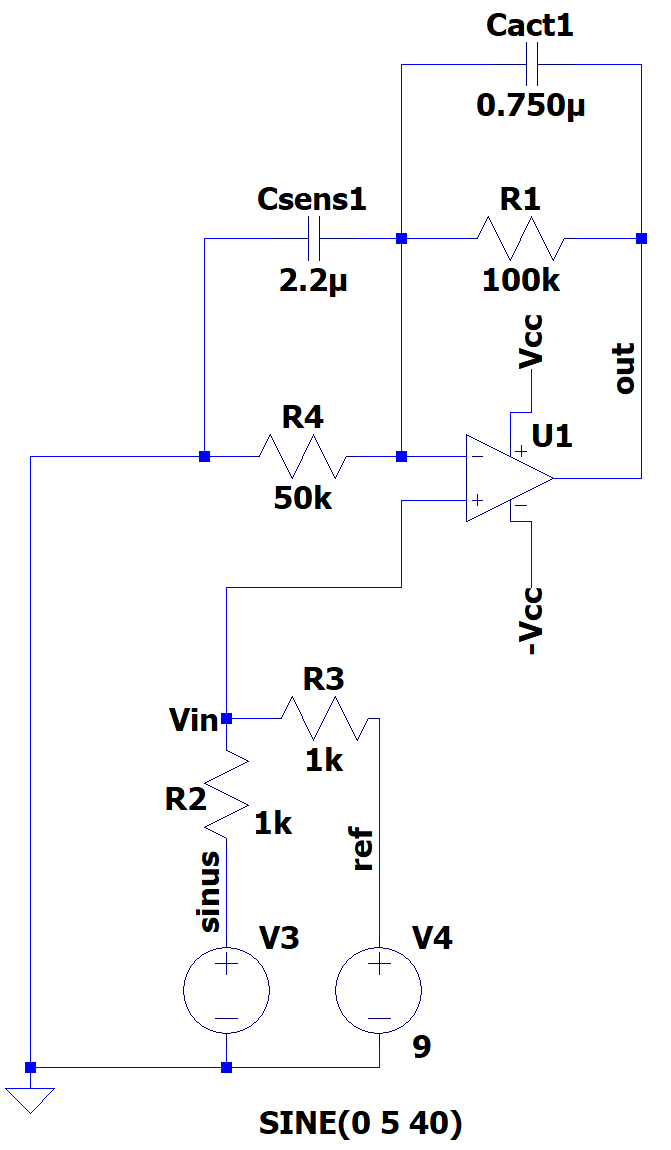 I still have the output always greater than the input, but this time, the current passing through the capacitors path is alternating between positive and negative : 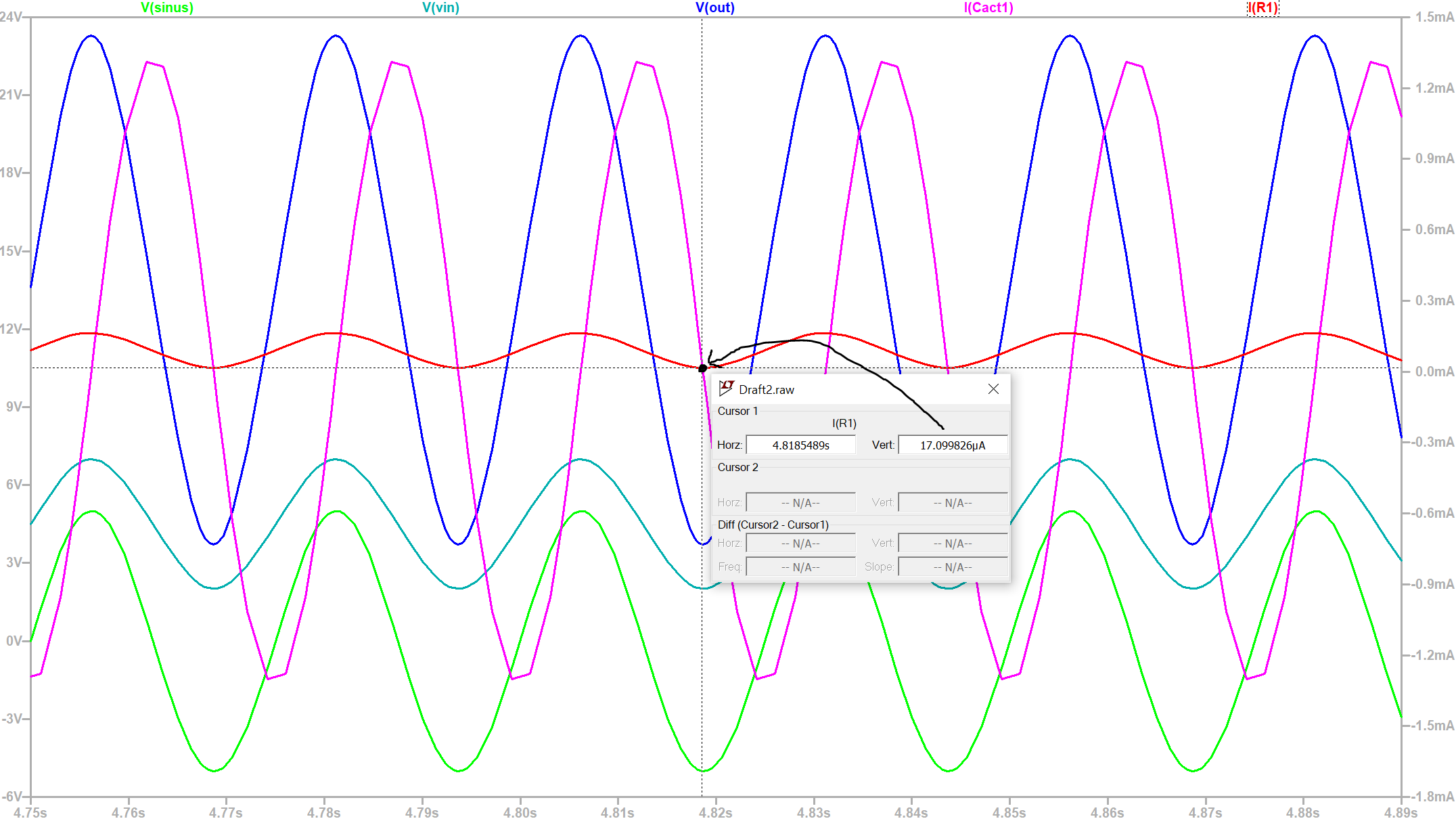 Although, i have to note that because i did apply a DC offset at the input of the opamp, i have to provide it a path at the output for the DC current to pass through (the resistors path is doing that, just by looking at I_R1 we see that the current is always positive, so that's DC current).

I also understand that capacitors block any DC current so if something has to "pass through", it has to be alternative current. But still, think about it, i always have a greater electric potential at the output than the inverting input of the opamp, so current should flow from output to the inverting input of the opamp and then to the ground. So, it should be a DC current passing through the resistors only. But then it would mean that there is no voltage drop across the capacitors (since no current supposedly pass through the capacitors) which is impossible because we all know that the voltage drop across the capacitors are the same than the respective resistors because they are in parallel..

So.. Has the rule "Current goes from high potential to low potential" been violated ?

PS: Sorry for the long post and thank you for your precious time !

Edit : Here is the sum of the current I_R1 and I_Cact1 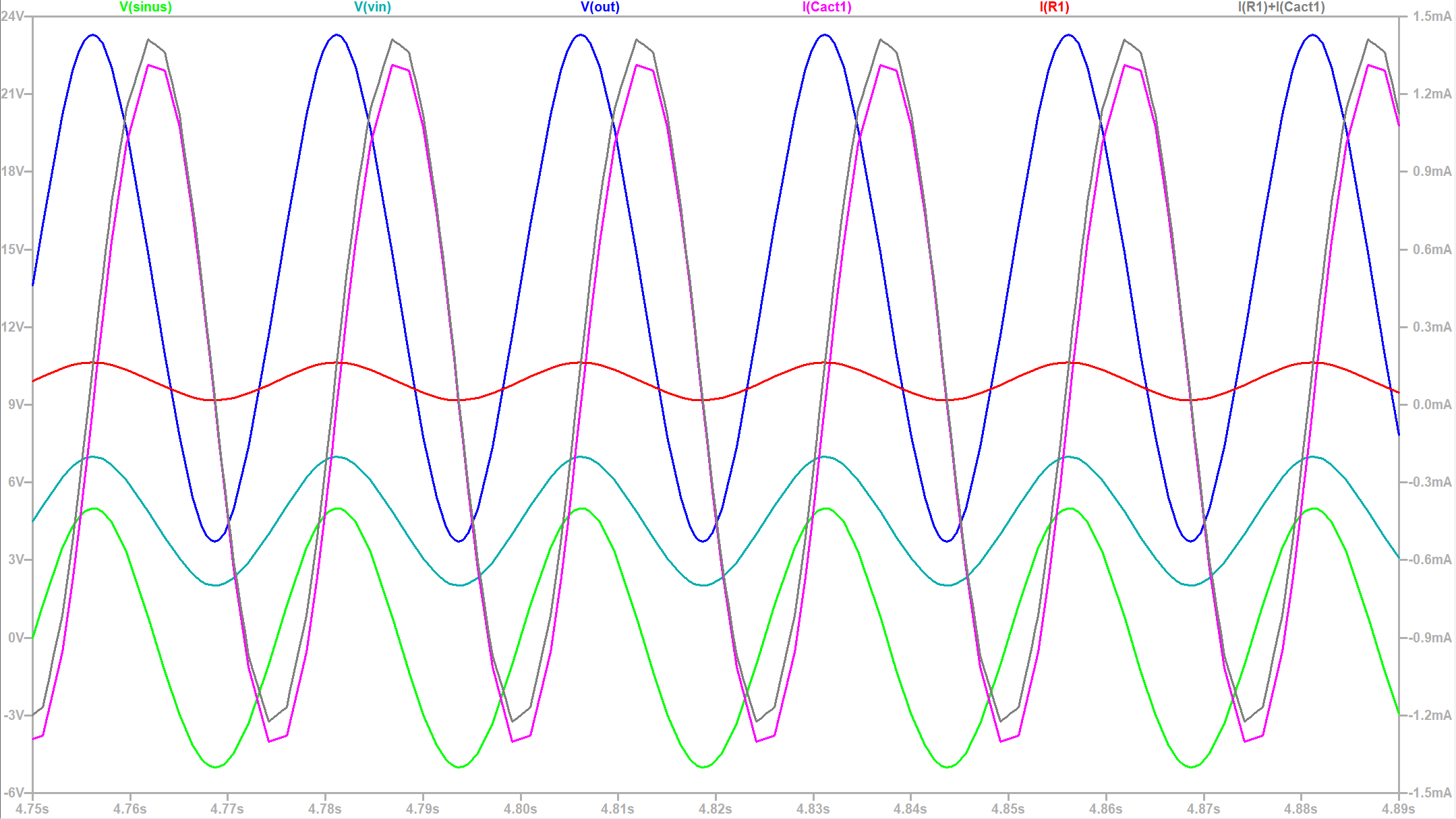 The rule that conventional current is always along the potential gradient applies only to purely resistive components. Capacitors can have current in both direction regardless of the instantaneous DC voltage.

So when you add reactive components to your circuit, you can see this "rule" violated

Not the answer you're looking for? Browse other questions tagged voltage operational-amplifier circuit-analysis current ltspice or ask your own question.

2
DC transient behavior of precision rectifier circuit
1
What OpAmp configuration is used in this circuit?
1
What should be the output voltage for Virtual Ground to occur in Inverting OpAmps?
0
Requesting help to understand this audio amplifier circuit
0
Op Amp Summing Point Problem (Ideal)
1
Why does an OpAmp with negative Feedback not amplify the potential difference on his inputs?
4
Help me understand this high voltage amplifier circuit for driving a piezo actuator
0
How Can I Design a Non-Inverting Active High Pass Filter?
1
Is there a current in \$R_1\$ in this precision rectifier if so, where does it go?