I was thinking why in oscillator circuits with only a DC source the capacitors and inductors don't reach a steady state where the first is an open circuit and the second a short circuit (so the whole thing behaves like a DC circuit).

My hypothesis is as follows: if the transistor were to always maintain a single state (i.e. Forward Active) then indeed the circuit would have reached a simple DC steady state (no oscillations after steady state is reached).

But if the transistors moves between Forward Active to Saturated (for example), there would be 2 DC steady states: one for the FA case, and the other for the Saturated case.

And as the transistor doesn't stay in either condition (FA or Saturated) long enough for the steady state of that condition to take root, the circuit keeps changing its behavior over time.

When the transistor in FA it moves towards DC steady state one, but before 1 is stabilised, Saturation occurs.

At Saturation it moves towards DC steady state two, but before 2 is stabilised, the transistor is forward active again.

(In this example I used, FA and Saturated, but it can go through Cut off as well).

(There is a separate question of why a Collpits oscillator, for example, produces a nice sine wave, but my question is more limited - only why it doesn't reach DC steady state regardless of what voltage pattern is produced as it oscillates).

This Collpits type oscillator goes from FA to Saturated: 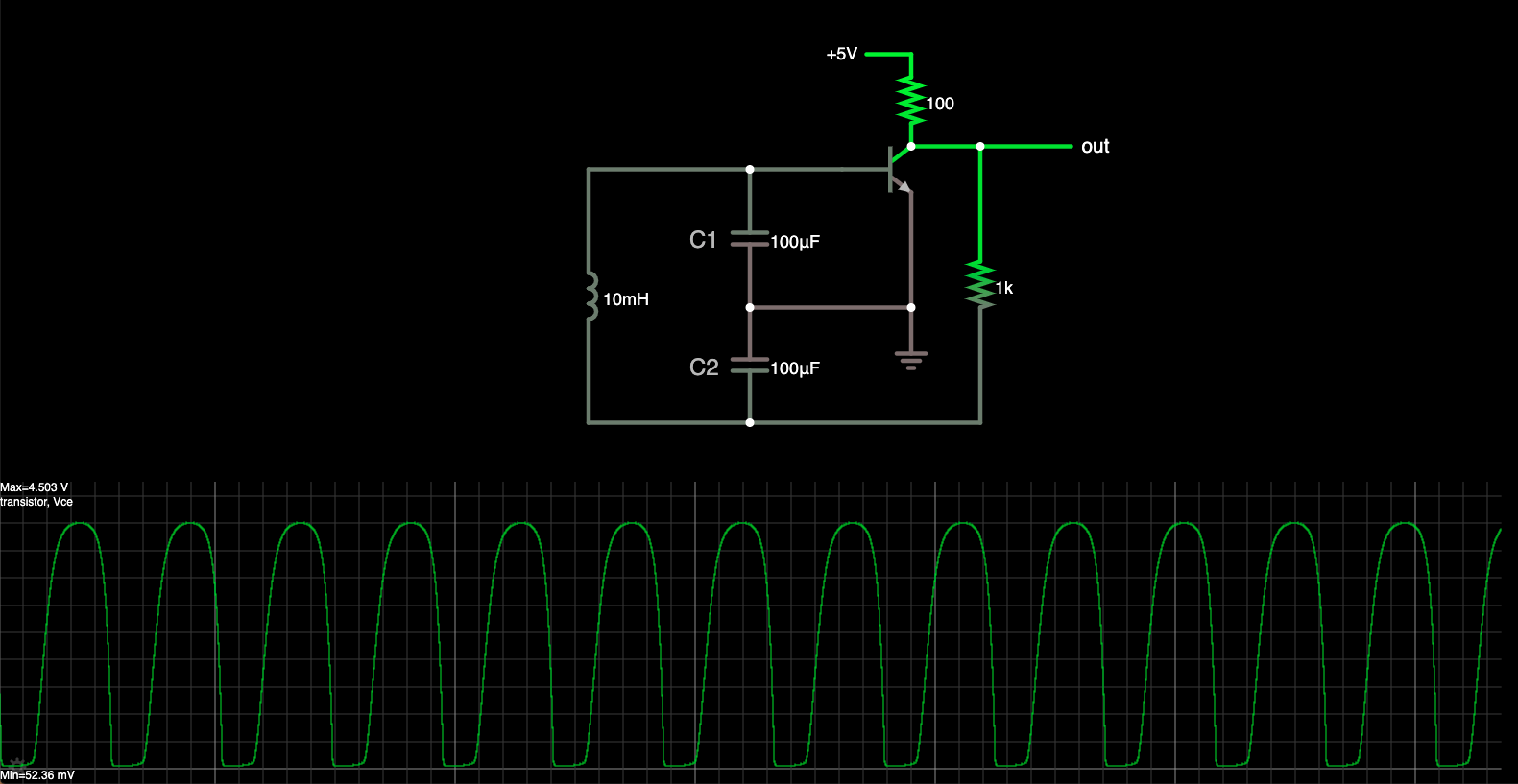 But having reduced the resistor to 10 ohm, it stays FA, and oscillation no longer occurs (ordinary DC steady state instead): 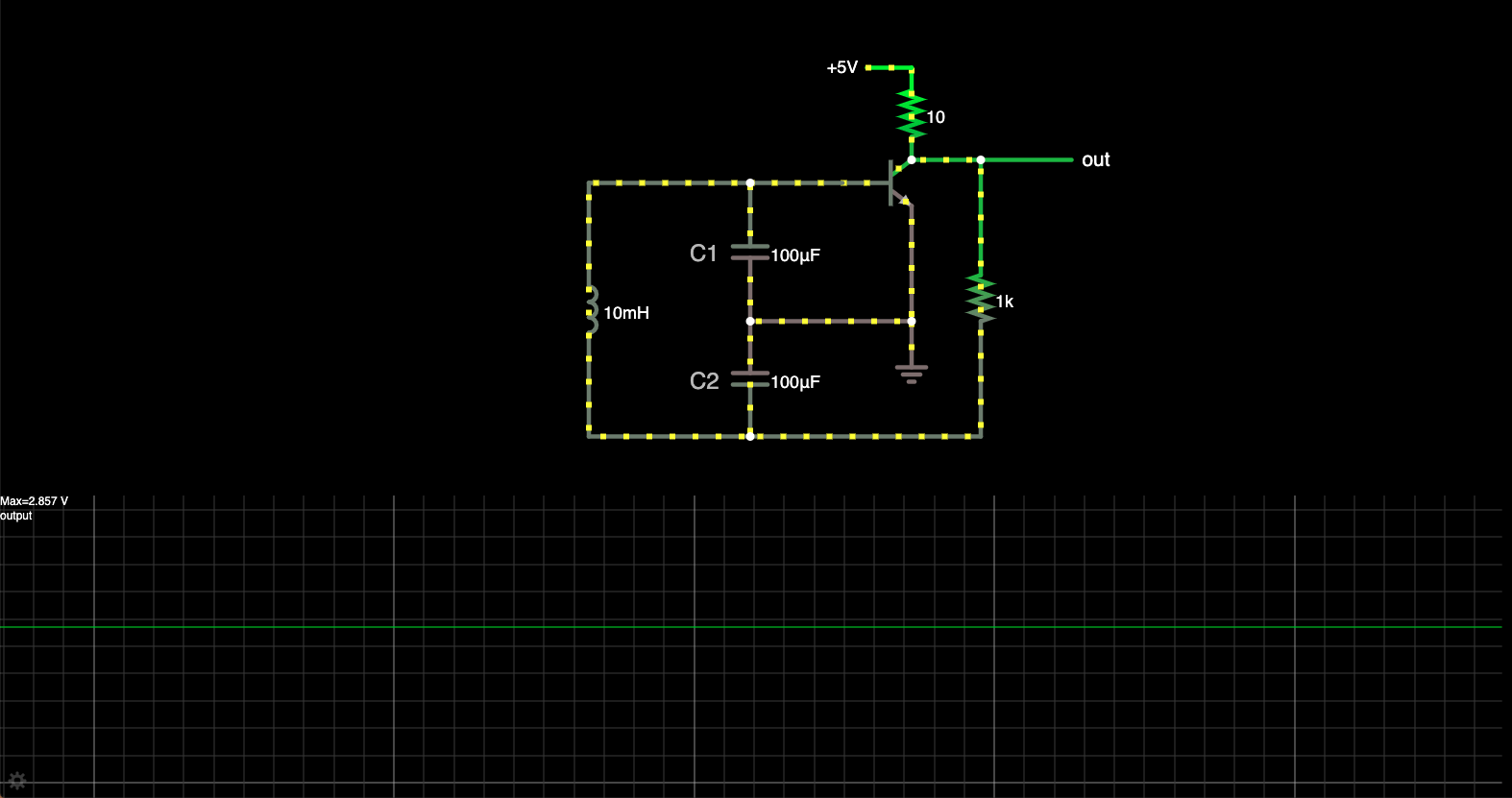 A multivibrator also shifts between mostly Saturated and Cutoff for each transistor: 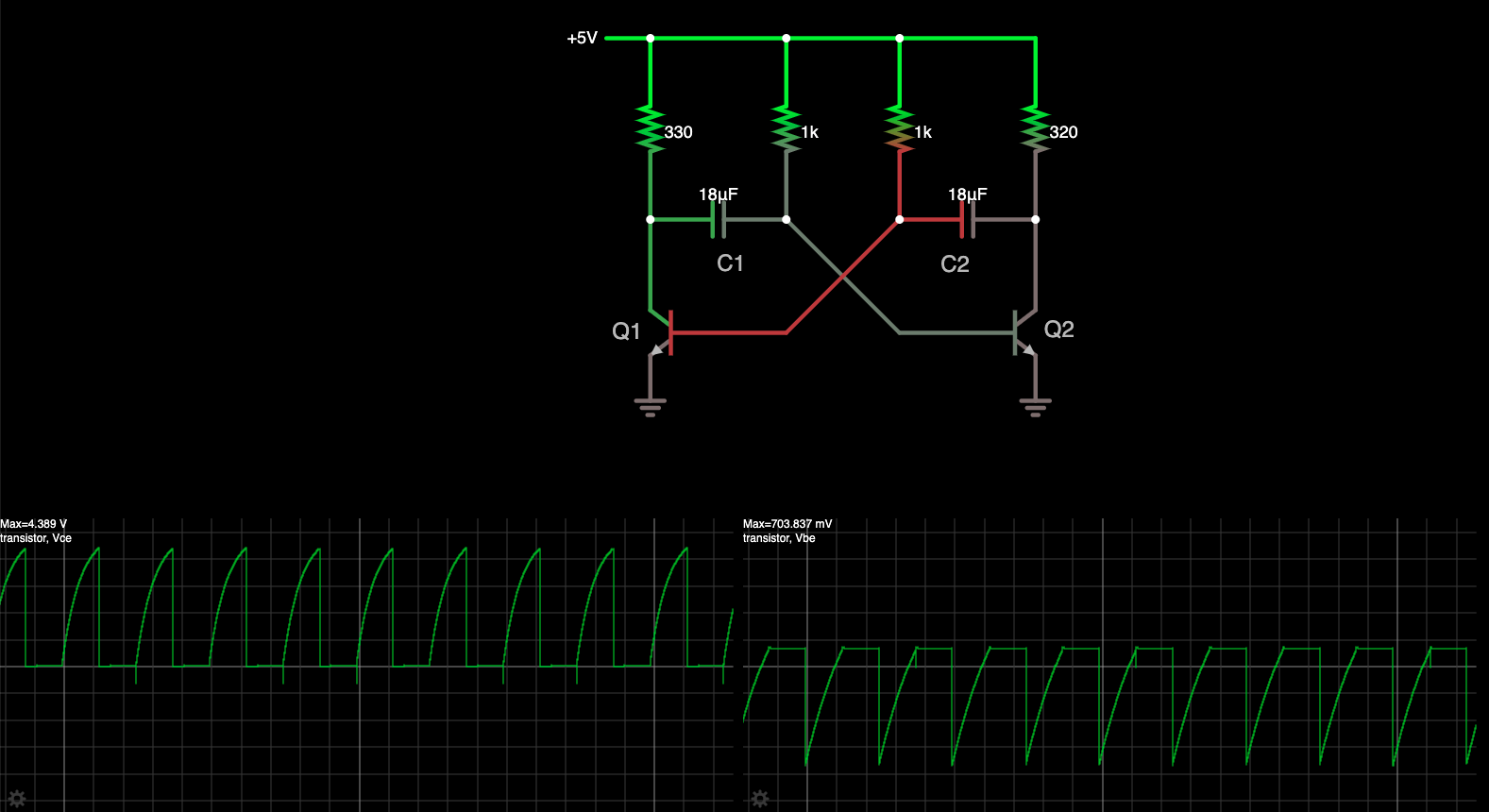 The best way to view transistor oscillators is in the frequency domain, rather than trying to apply intuition and imprecise transitions in the time domain. It might make sense for really simple circuits or mechanical systems, but in a typical transistor oscillator there are enough dynamic elements (capacitances and inductances) that ad-hoc hand analysis like that won't necessarily get you far. In fact the journey/derivation I'll present below doesn't consider transistors being in forward active or saturation, and it doesn't even consider transistors at all.

Ultimately, you can view the circuit in front of you as a feedback system. Feedback systems are common and well-understood in electrical engineering -- examples include something as simple as an op-amp amplifier. Generally, we like them to be stable, but oscillators are an example of a feedback network which is intentionally unstable. 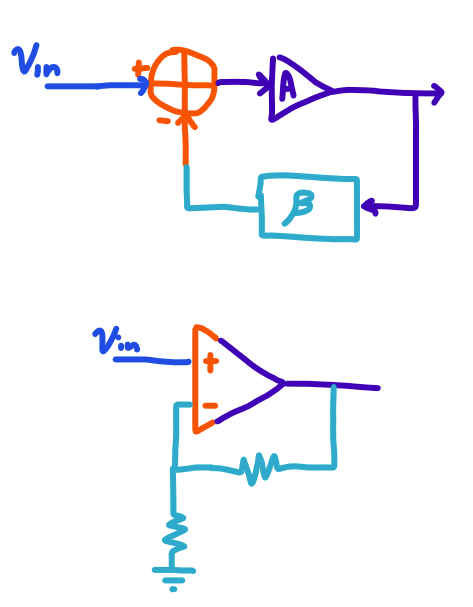 Let's look at the so-called "loop gain" of the structure. To do this, we null the input, and we break the loop at any point. We then inject a signal, let it make a trip around the loop, and see what we get after it goes around once1: 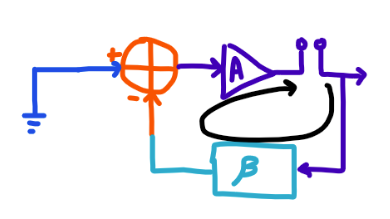 In an ideal world, the loop gain is negative. However, the loop gain is actually dependent on frequency. Under a typical assumption that the circuit is linear and time-invariant, we can consider its response to every frequency of sine wave independently. For each sine wave you put in, you get a sine wave out at the same frequency. This assumption holds really well for small signals, while for larger signals the amplifier may saturate (not necessarily by saturating any individual transistor).

The loop gain is then a function of frequency, and is composed of both a magnitude (how big the output sine wave is, compared to the size of the input sine wave) and phase (how much the output wave is shifted) compared to the input wave. The loop gain tells us all about how our system responds to a sine wave going around the loop, including whether it grows or shrinks. In the definition of loop gain, I consider subtraction a part of it (since it's both in line with the tools I use, and it is conceptually simpler to think about since there's no "double negative" to keep track of at oscillation).

A sine wave that grows (magnitude > 1) while keeping its exact phase (loopgain phase is zero degrees) is going to become an oscillation, and if there's any such frequency at which the amplifier has a loop gain of zero phase, gain > 1, the system will oscillate at that frequency.

Going back to our ideal world where we want a stable amplifier that doesn't oscillate, we want it to have a loop gain whose phase is 180 degrees -- when we put a sine wave deviation into the loop, the amplifier corrects it.

We can plot the gain and the phase using a so-called Bode Plot: 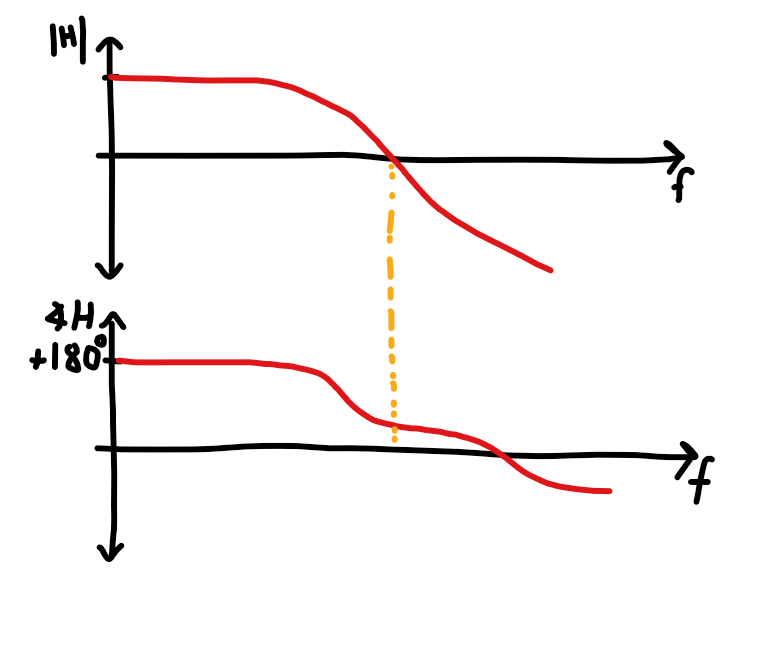 Notice the orange marker and how it indicates an important characteristic of the amplifier circuit: By the point the phase reaches zero degrees (meaning that you put a sine in and it comes out at the exact same phase), the gain is below 0 dB (meaning that the oscillation dies out). This amplifier is stable.

Now consider the same calculation of your Colpitts Oscillator -- it has a structure that is inherently unstable, and its phase reaches zero degrees (meaning that a sine in creates a sine out at the same phase) while the gain is positive -- a full derivation is given in this answer.

In fact, the gain and phase of oscillators can have pretty unusual shapes dissimilar to the smooth and generally downward-sloping plots seen for amplifiers (or amplifiers inadvertenly oscillating due to instability) -- the plot below is from the oscillator I am currently designing for a low-power radio application using a somewhat similar topology and an external resonator to establish the appropriate phase response and resonant behavior at oscillation: 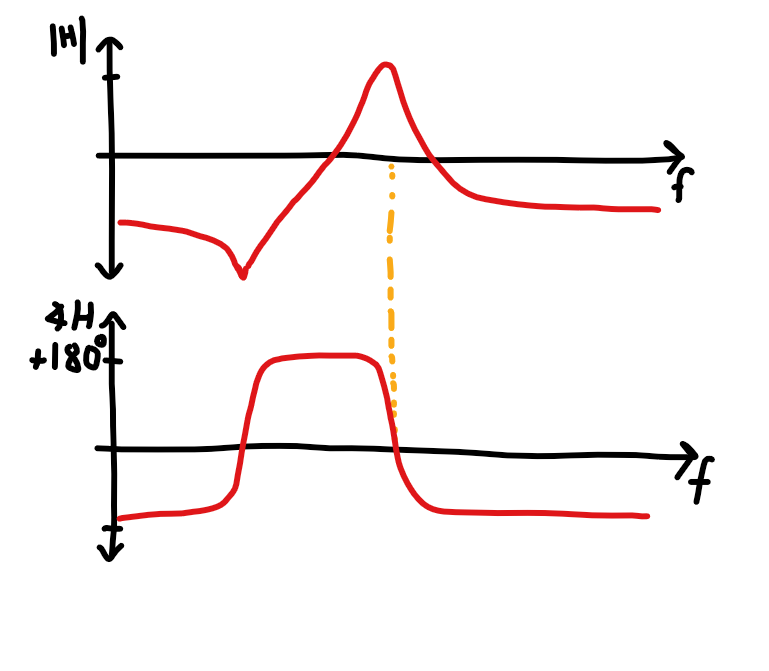 This means that you get a sine at the right frequency from anywhere and it'll start building up more and more until it reaches the limits of the circuit's ability to increase further (at which point the "linear" part of our linear time-invariant assumption breaks down and the sine is sustained at the same amplitude without further growth). This is where saturation, and hence gain control, may occur.

Where does that initial sine at the right frequency come from? The thermal noise that's present everywhere in the oscillator contains all possible frequencies, and even the tiniest wisps of energy at the right frequency will build up cycle after cycle, growing until checked by nonlinearities which bring the gain back to unity.

This is of course not the only way to view oscillator topologies. One other topology that's pretty common is the Pierce Oscillator topology used for the oscillator on board microcontrollers such as the Arduino -- it can be seen as an RLC circuit (i.e. a lossy resonator) in parallel with a negative impedance such that the combined result is an RLC circuit with a negative resistance, i.e. a negative loss, i.e. a self-sustaining and growing oscillation.

1 This is a simplification. For maximum accuracy, you have to consider input and output impedances (so you really need to inject both voltages and currents, and test with both open-circuits and short-circuits-to-ground). You also need to consider so-called bilateral feedback: Even though the amplifier "points" in a certain direction, it can pass signals in the reverse direction very slightly.

why in oscillator circuits with only a DC source the capacitors and inductors don't reach a steady state where the first is an open circuit and the second a short circuit (so the whole thing behaves like a DC circuit).

One can certainly design circuits that reach a steady state, where capacitors act like open circuits, and inductors like shorts. However, any circuit, in such a steady, non-oscillating state is, by definition, not a working oscillator.

if the transistor were to always maintain a single state (i.e. Forward Active) then indeed the circuit would have reached a simple DC steady state (no oscillations after steady state is reached).

No, an oscillator does not require leaving the Forward Active mode in order to operate. Rather it is necessary that at some frequency, there is a closed-loop gain of exactly one. This can be achieved in a variety of ways. One method, that is perhaps not so common now is to control gain via an incandescent lamp as a feedback element. As oscillations increase, the lamp heats up, and gain is reduced. Another method is to make use of a diode's non-linear characteristics to achieve gain control.

I do wonder if as far as it goes, the statement above is valid

An oscillator may be designed to use transistor saturation as part of it's overall mechanism. But it is not required that all oscillators behave this way.

why doesn't [a Colpitts oscillator] reach DC steady state regardless of what voltage pattern is produced as it oscillates.

[If the Colpitts oscillator is not well designed, it may have difficulty starting up, and require a "kick" to get it started. This would be due to it having insufficient closed loop gain at low amplitudes.]

Once it has begun oscillating, it would never approach the meta-stable state, because any decrease in the oscillation amplitude increases the closed loop gain.

I think you will understand that transistors are very non-linear amplifiers.

There is no steady current voltage, impedance, current gain or voltage gain.

To get a sine wave you need some method of linearizing the oscillation such as high Q band pass filters or linear RC phase shift network with negative feedback to linearized the non-linear gain.

However with a very high Q ratio it can make current pulses into sine waves with as narrow bandwidth filter in the feedback loop.

This in essence is what Hartley- Colpitts oscillators do.
Convert pulse currents sine wave voltages.

Most of the gain is in the Q of the filter.

Here's one have haven't heard of. Direct coupled differential current pump by Tony.

Not the answer you're looking for? Browse other questions tagged transistors bjt oscillator or ask your own question.

5
How does the Colpitts Oscillator reach a loop gain of 1?
2
Wien Bridge Oscillator: Why does equating the real part to 0 give the gain equation?

3
NPN transistor circuit connection, what determines which region it is at?
2
Bipolar transistor as a switch
1
Why does the collector current direction remain the same in saturation and active region?
1
Why are the transistors in logic circuits used in saturation region for ON state?
0
Current gain characteristics versus Collector Emitter voltage. Where is the transistor saturated? Can a transistor be saturated with a VCE of -10V?
1
Connecting only emitter to collector-BJT
0
Transistor Analysis
0
Transistor operating region - push pull & current mirror
1
Transistor collector emitter saturation voltage
2
How does this transistor behave as the base voltage is increased?