In the new design, I'm trying to detect when conflicting signals are asserted to wires and issue a warning if this is the case. Now I get lots of warnings when simulating the famous MIC-1 machine according to "Structured Computer Organisation" by Andrew S. Tannenbaum. They originate from bus contention when reading register values from the CPU's scratchpad (aka register file).

The scratchpad circuit looks as follows: 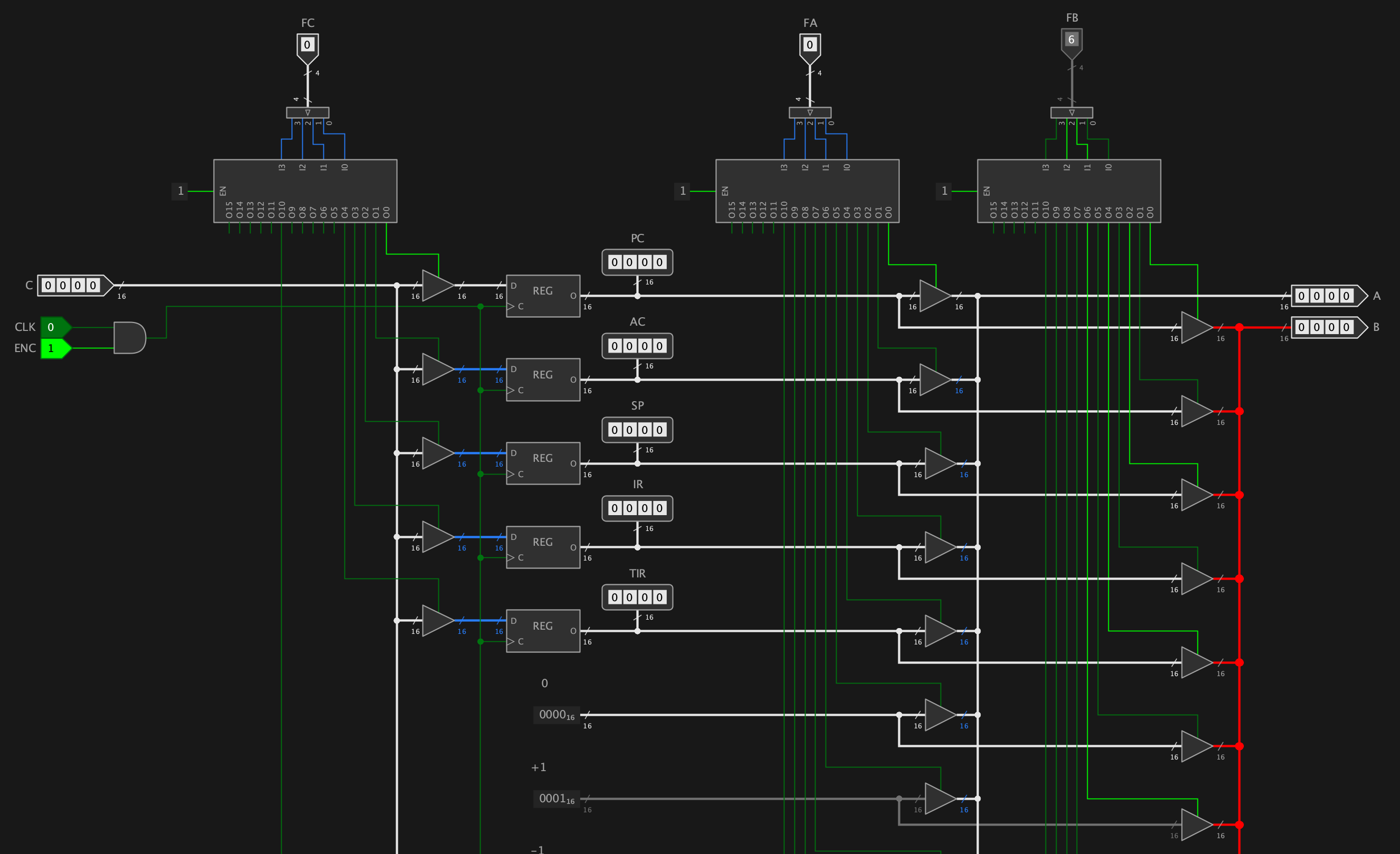 The tristate buffers at the right side are supposed to control which register forwards its current value onto the CPU's B data path. The register is selected by 4-bit input "FB", whose value gets decoded by an 4-16 decoder.

The problem is that the decoder (like any combinational circuit) produces intermediate results due to propagation delays of the various logic gates it consists of. In the example above, register 6 is to be addressed, but for a short moment, the decoder sets more than one output line to "high".

The contention exists for 20 ns and is determined by one single gate delay. I've chosen this value for simulation because it seems to be in the range of typical real hardware gates. The signal then remains stable for at least 9'000 ns.

The root cause the contention is illustrated by the following snapshot of the decoder. The signals that run through the inverters take longer, and the output AND gates produce invalid intermediate results.

Note: The snapshot is taken from a test with a 3-8 decoder. The 4-16 decoder used in the scratchpad consists of two of them. And don't be confused by the "zero" bubbles at the AND's outputs. These are produced by the signal flow animation feature and represent the signals that are going to flow to the outputs with the next simulation cycle, thereby establishing the expected and correct output of the decoder. 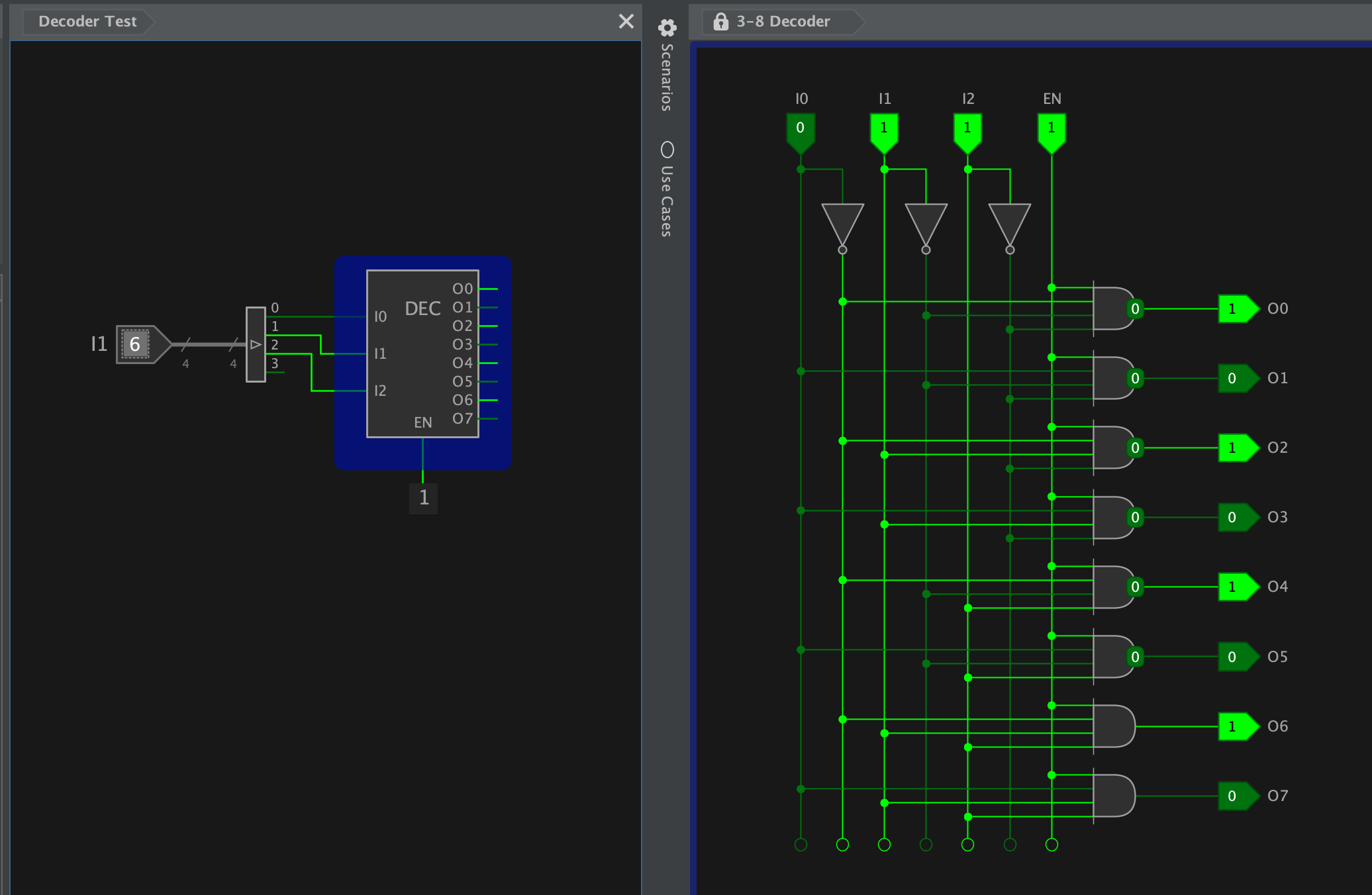 The question is how conflicting signals at the outputs of tristate buffers can be avoided. I've considered the following options.

I'm more a software engineer than an electrical engineer and am therefore perhaps just not aware of a possibly obvious solution to my problem, so any help is appreciated.

If the time of contention is short, compared to the time it takes the bus to change from high to low (the fall time) or from low to high (the rise time) then the contention is not usually significant.

For example, suppose a wire in the bus has been driven to a high level by driver A. Once the wire reaches that high level then driver A is sourcing only a tiny current to keep it there. Now, if driver B starts to try to drive the wire low then driver B will be sinking a large current to change the voltage on the wire quickly. However, most of that current is from discharging the capacitance of the wire rather than from driver A. Driver A is still supplying only a tiny current at first. As long as driver A gets turned off before the voltage on the wire falls very much, the bulk of the current through driver B will be from discharging the bus capacitance (which can not be avoided) and not from contention with driver A.

Not the answer you're looking for? Browse other questions tagged digital-logic bus decoder tri-state or ask your own question.

3
Dealing with digital circuits and their associated switching speed?
3
It is better to fix x's in the simulation or in the design?
2
CPU - Basic control unit design
9
Does ISA bus (or PC/XT bus) have some means of arbitration to resolve bus contention?
0
TDO unable to capture MSB of Shifted data in JTAG
2
VHDL: port declaration design for a feedback signal
3
VHDL -- K-map reduced characteristic equation fails
3
Any significant differen in these CMOS XOR gates?
0
Creating a simple address and data bus with Arduino Uno as a master using 3-state buffers and decoders