I am using a MOSFET to read a square wave, which usually ranges between -1 and 16 V. However, on occasion, the signal can reach values of -30 to 45 V. My current setup uses a Zener-protected STN3N45K3 MOSFET (max Vgs +/- 30 V). The circuit is shown below. Note that the RPM_DI signal is connected to a microcontroller input, which is pulled-up to 3V3 via a 1K resistor. The input driver signal goes in through pin 3 in P20. Note also that D15 is the TVS diode I am planning on installing. 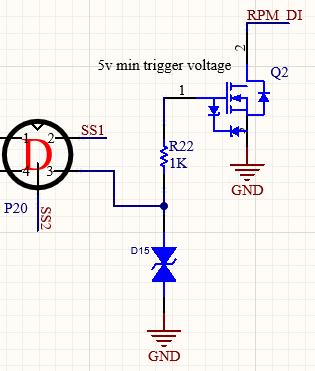 I guess my question is somewhat similar to what was asked here: Mosfet Gate-Source Zener. In terms of this other question, I would ask: Could the Zener become damaged after continuous application of the 30 V signal? Does this depend on the power dissipated by the Zener? If so, how would I calculate the power?

If anyone can help, I'd appreciate it!

Move the TVS labelled as D15 after resistor R22.

In this way, the protection becomes really effective.

Not the answer you're looking for? Browse other questions tagged mosfet zener gate-driving tvs or ask your own question.