What does a 'scaling factor' mean for an ADC?

I'm using the analog input on the Controllino Maxi Automation to determine the temperature of a 10K NTC thermistor. I'm having some difficulty understanding how the ADC works.

On a regular arduino nano, this code from Adafruit works okay, only off by a degree. But on the Controllino it's off by anywhere between 6-10 degrees. Fine tuning the parameters (temp @25C, series resistor and B coff) doesn't help at all.

Looking at the documentation they mention a scaling factor (last couple lines in the image below) but I'm not sure how to apply it or what it means.

I assume this means I can't just convert straight from an ADC value into a voltage reading? 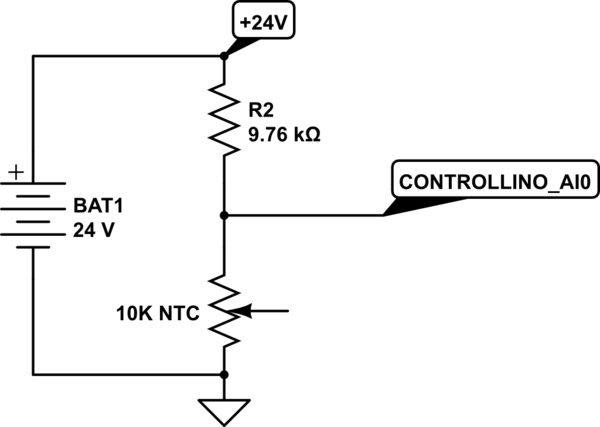 The schematic editor didn't have the thermistor symbol just btw

The "scaling factor" referred to in the linked page is related to how you calculate the ADC voltage from the raw ADC number that the Arduino gives you.

Your algorithm never calculates the voltage, so you don't need to worry about that.

Your algorithm uses a proportional calculation to go straight from the raw ADC value to the NTC resistance without ever needing to know the voltage. All it needs is the ratio of the ADC value to the ADC range and the value of the external series resistor.

The external series resistor and the 24V supply are the cause of your problems.

You need to look into self heating in NTC thermistors.

The current through the series resistor and the NTC causes the NTC itself to heat up.

This chart from the TI document linked to above shows the problem quite clearly: 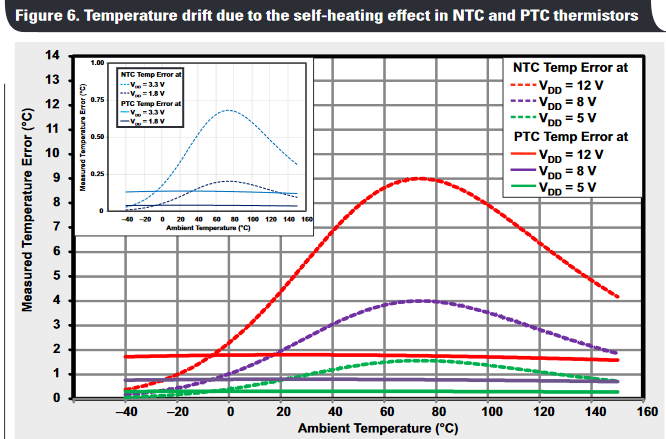 That dotted red line with the big hump is the problem you are seeing.

Yours is probably worse since you are using 24V rather than just 12V.

It would also cause more noise in the readings and reduce the range over which the ADC values are measured. With the resistor values you are using, you can expect ADC values between 0 and 512. If you increased the series resistor to 100k (factor of 10) then you would only see ADC values from 0 to 51, greatly decreasing the precision.

I don't know how you'd do (1.) (3) requires you to purchase a new thermistor, which you might not be able to do.

(2) has some down sides, but you can turn one of the disadvantages into a useful thing.

The first disadvantage to (2) is that it will reduce the effective number of bits you will receive - your measurements will have bigger "steps."

The second disadvantage is that the readings will be noiser.

What I'd do (for hobby stuff, anyway) is to increase the series resistor to 100k. That reduces the self heating by a factor of 10. That goes from an error of 10 degree to an error of 1 degree.

Since it is now noisier, I'd oversample and average the ADC values. Averaging reduces the noise, but the combination of oversampling with noise gains you back some of those lost bits of resolution.

That factor of 10 is about equivalent 3 to 4 bits of resolution.

If you oversample, average and decimate by a factor of 256, then you will gain 4 bits of resolution, bringing your resolution back up to about what it was with the original circuit.

That will get you a more accurate temperature reading. There will still be some error from the self heating, but it will be much smaller than before.

You may need to put a capacitor in parallel with the NTC to reduce some of the noise before it gets to the ADC and to reduce the impedance of the NTC circuit so that the ADC doesn't "pull" it away from the correct value. Some noise is good, too much is bad.

Not the answer you're looking for? Browse other questions tagged arduino adc thermistor controllino or ask your own question.

2
I'm getting 512 as a reading from a thermistor. Trying to convert this into something readable but having a hard time
0
problem of transmitting data from serial device to bluetooth on Arduino
0
Vishay Thermistor Reading Issues
0
What does an ADC DNL specification mean, exactly?
3
What does a High Impedance input mean for an ADC
4
What does 0.5lsb and 1.5lsb mean in ADC
1
Calculating NTC temperature on Controllino Maxi Automation yields incorrect temperature