Where is the electric field in an \$LC\$ circuit?

Suppose we have an ideal \$LC\$ circuit with an open switch at time \$t=0\$ where the capacitor is initially charged to a voltage \$V\$.

The instant the switch is closed, the typical \$LC\$ oscillations will begin.

What electric field actually causes these oscillations to begin?

At time \$t=0+dt\$ the electric field in the circuit should appear as follows: 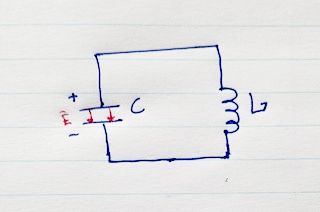 We know that \$F=ma\$ and electrons have a nonzero mass so they can only gain speed (they are initially at rest at \$t=0\$) if there is a non-zero electric field at their position.

Where is the electric field that supplies this force?

My second and primary issue is that there does not appear to be any location where an electric field can exist to supply the back EMF.

It is this back EMF which must be overcome in order for the creation of a magnetic field within any inductor.

That is, when we wish to create a magnetic field, we must do work against an electric field that opposes the motion of the charge and that energy supplied in opposition to the back EMF materializes as energy within the magnetic field that we create.

There does not appear to be any field that could possibly provide that resistive back EMF to oppose the motion of the charge of the current.

Think about it this way:

Imagine a positive charge moving from the positive plate to the negative plate as the capacitor discharges. In its traversal of the circuit, not once does it encounter an electric field to take away the energy it possesses and transform that energy into magnetic field energy. Where is the location of the electric field providing the back EMF?

The E Field across the capacitor plates will oscillate with the H field around the inductor wire as the right hand rule for inductor current.

The E field will be present as soon as a voltage is applied or current applied to charge to a certain preset voltage, not simply after the circuit is closed. before t=0 it is a static E field condition.

It will oscillate forever with any non-zero initial condition and lossless electrodes , wire, dielectric and magnetic materials if any.

I=dQ/dt is true for both parts which charge flow in an oscillating loop. It is sinusoidal and V vs I are always 180 degrees out of phase in this LC closed loop.

The laws of the RLC circuits were discovered much before the electrons so just apply them and forget about atoms, electrons, attraction forces, the second law of dynamics, etc.

If you really want to understand how the electrons move in a conductor you have to know quantum physics (the equation of Schrodinger). Explanations based on attraction forces, F=ma, etc, will all fail.