This question is to help the "hard of hearing community" so that they can READ the phone/mobile call because they can not hear it.

Android has some really good (and free, too) apps which can convert voice to text with high accuracy and in many languages (Google Live Transcribe, SpeechNote etc.) Unfortunately as of now there is no feature to transcribe a phone call on Android (Google is working on it but it has a lot of complexities ranging from technical to privacy.)

To transcribe phone calls, I need help from experts.

A hard of hearing person will get call on his mobile phone. (Let us call this mobile "Mobile1.") A mobile headset will be connected to Mobile1 which will have left and right audio and a microphone. 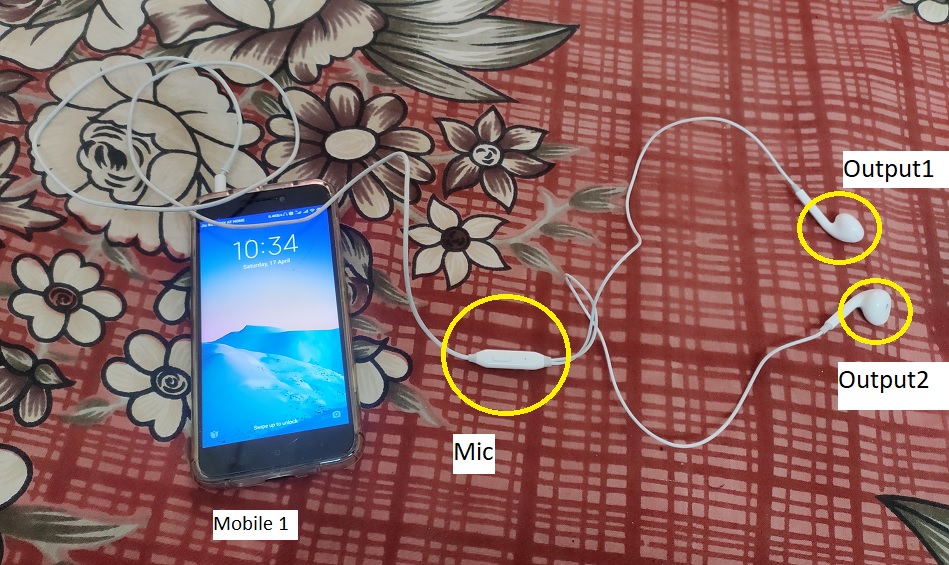 How can I remove Output2 and feed this output to another Android mobile (Mobile2) microphone as input so that Mobile2 can transcribe the caller's voice successfully? A picture of that case is given below where Google Live Transcribe on Mobile2 is translating the voice (which it gets it from its microphone) to text.

I read on the internet and learned some basic terminology about the headset, so based on my limited knowledge, please guide me on how to connect the left or right audio channel wire from one headset to the microphone of another mobile.

Can you please give me a YouTube video demonstrating the making of that adapter or cable or some photos of how to make it so that I can connect with some local shopkeeper for the same because I am not an electronics engineer. I just want to help the deaf community around me and want to see happiness on their faces.

The answer to an old question gave me that idea that we can achieve what I was thinking but that I think the answer is not complete.

If I did not explain myself clearly please ask so that I can do my best to clear it. Please help to support the noble cause of making someone happy.

Edit 1 - Adding a rough diagram as per the suggestion by David.

@David - Can you please confirm whether my understanding is correct about the connectivity of different adapters from source to target mobile? If anything needs to be changed please let me know. 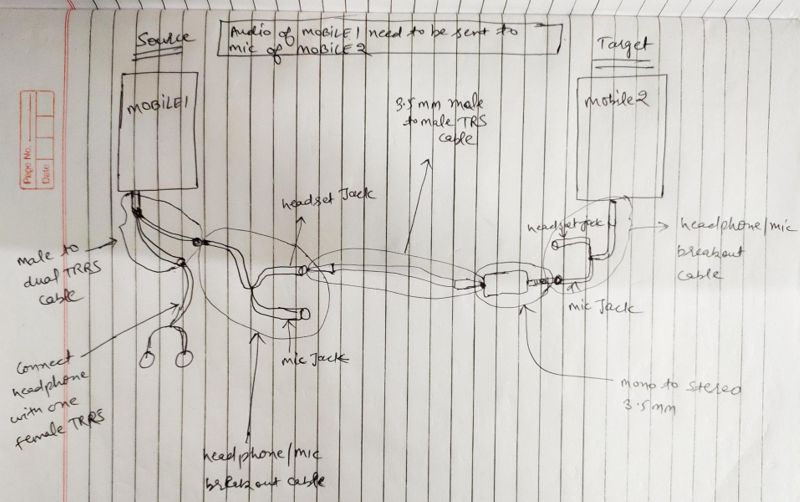 I have had a look at the Google headset specifications.

You will not be making a transcription adapter using a pile of standard Y-cables and other adapters. That will not work.

You will have to make an adapter that the transcribing phone will recognize as an external microphone, and that reduces the electrical level of the earphone outputs to something that is appropriate for the microphone input. 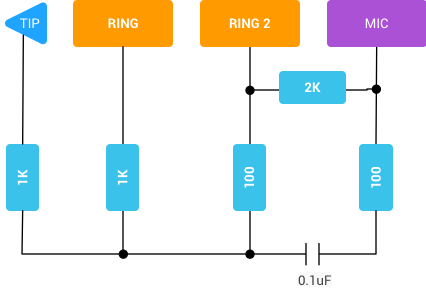 You will notice that I changed the value of the capacitor. I made some measurements, and found that the circuit Google recommends attenuates the lower frequencies: 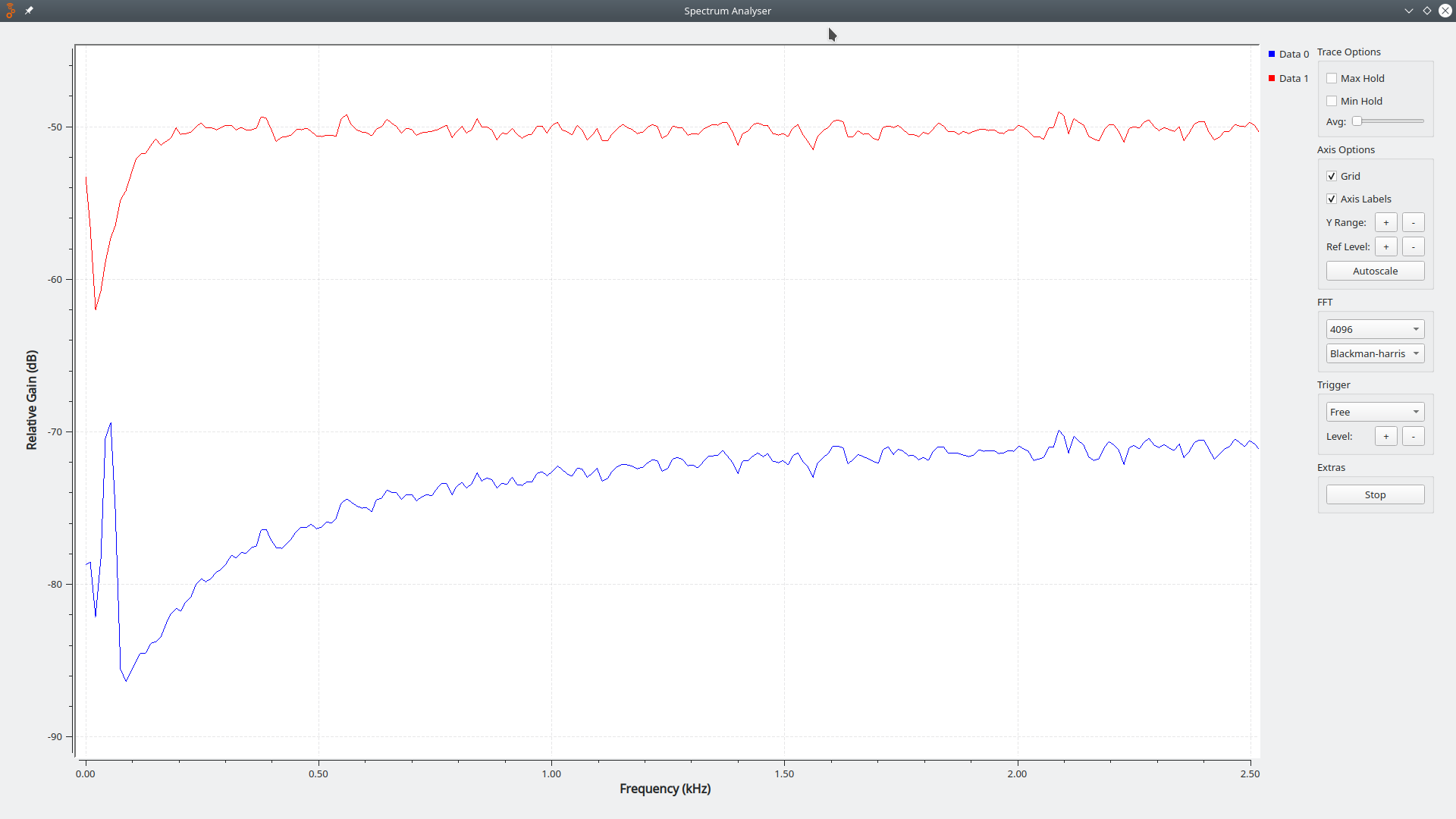 The red (earphone output) and blue (microphone input) lines should have the same shape, but with the blue line 20 dB below the red one. The 100nF capacitor that Google specifies does terrible things to the frequency response.

The 4.7µF part in my diagram has a frequency response that looks like this: 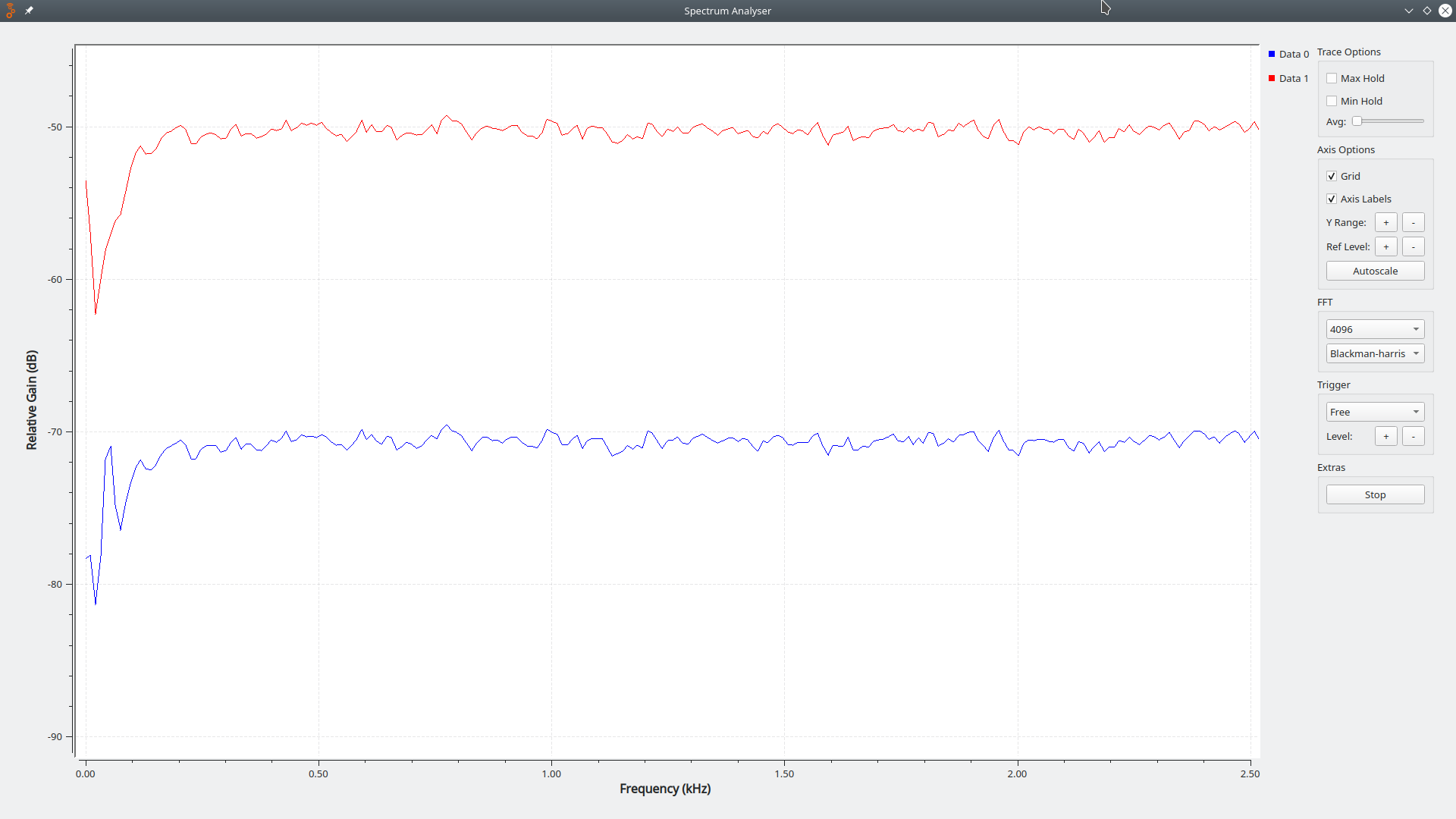 You could build the circuit I've drawn with a 4 pole CTIA plug at both ends, then use a 4 pole Y-adapter to plug it and a headset into the phone you use for making the call. The other end of the adapter goes to the transcription phone.

Alternatively, you can build an adapter that plugs into both phones with a socket for the headset.

Finally, you can do what I did to try things out and build a headset with a transcription output.

This is the gadget I built to test the circuit: 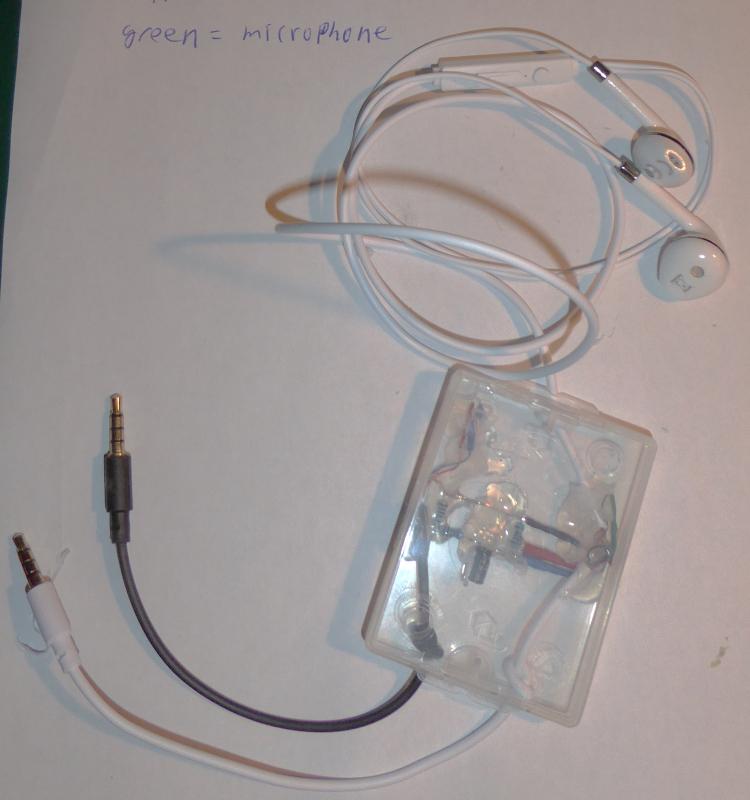 I butchered two headsets and combined them into one unit to be certain that things will work properly before suggesting that you use my circuit. 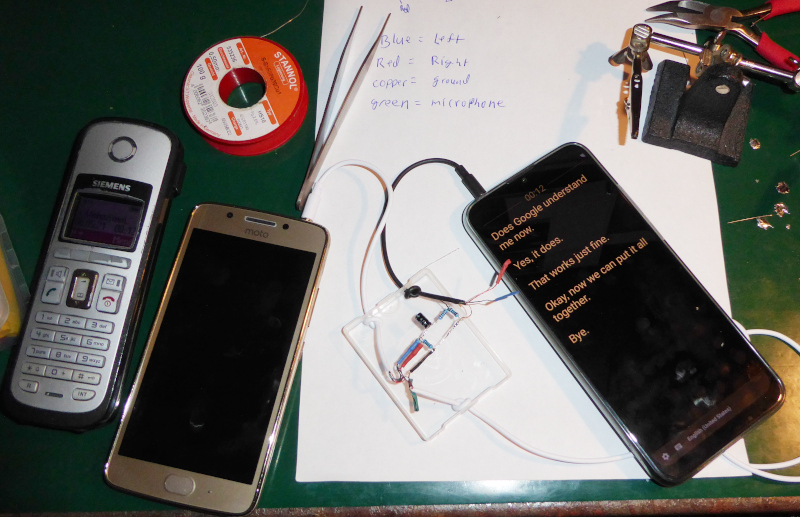 The same adapter could be used to transcribe phone calls or other audio from a laptop or PC - provided the laptop or PC has a 4 pole CTIA socket for the headset. Many of them do, these days. The signal levels should be close enough for it to work properly. I have not tested it, but it should work.

It would also be possible to make an adapter that would do transcriptions from the older, separate microphone/earphone plugs that many PCs have.

The same circuit could be used with a 3 pole socket to provide a line-in input to an Android phone for recording audio from other devices. It will mix a stereo input to mono, and attenuate it to an appropriate level for the phone's microphone input.

The easiest way to to it would be using a trrs y cable (1 male TRRS to two female TRRS) then one of the frmale TRRS could attached to a headset, then a TRRS to headphone breakout cables and attach to the other phone.

so One of these trrs male to dual trrs female: 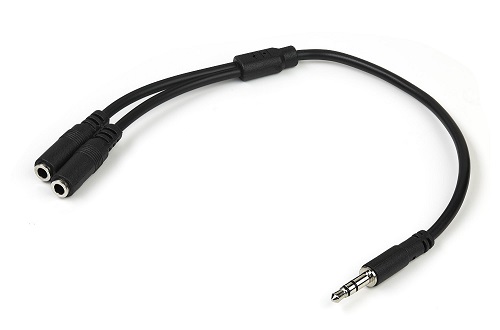 Plug one into the existing headphones, the other into a headphone /mic break out cable: 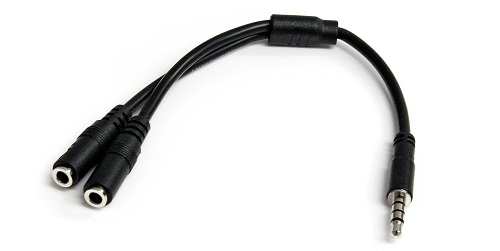 Then plug another breakout cable in your other smartphone. install a mono to stereo 3.5mm on the mic side+smartphone unit : 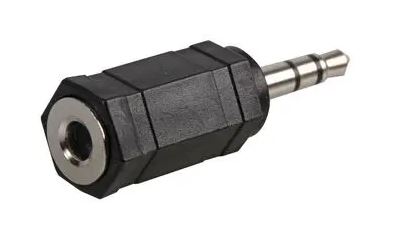 Then link the headphone out put on the source to the mic input that has the adapter with a cable: 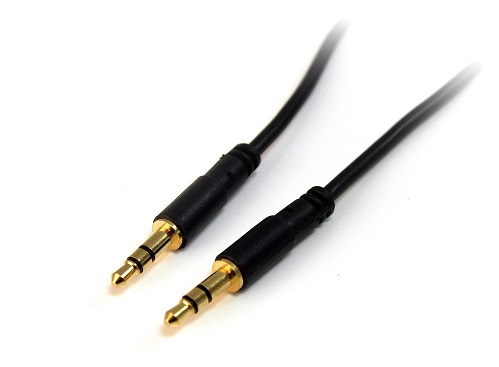 Not the answer you're looking for? Browse other questions tagged audio microphone android or ask your own question.

0
Mobile headset audio OUT to MIC of another mobile using adapters
1
How can I make a L+R+mic audio dongle to record an Android phone's own output?
0
Plug an Android phone into a USB sound card using a 4-poles 3.5 mm cable
0
How to connect a line-out to mic on Android plug? (CTIA)

4
What Voltage/Current Levels Can I Send Into the Microphone Input on a Mobile Phone?
5
How can I send video from my Arduino camera module video to my Android screen?
1
Reversing headset speaker to microphone
3
Join the microphone and audio lines from a headset for recording
3
Speaker out (from laptop) to Mic in (Mobile phones)
2
Why would credit card reader over audio jack not work on some devices?
0
Linking Android phone to motorcycle helmet comm set
0
How to connect a line-out to mic on Android plug? (CTIA)