Forward voltage of a diode

I hope you could help me with this question.

Why would the voltage drop only by 0.2V when the forward voltage of this diode is 0.8V. The Zener diode voltage is 10V

Saying that a diode has a forward drop of any single voltage value is to miss the bigger point about diodes. "One size doesn't fit all" when it comes to properly understanding diodes.

A diode is said to have a forward drop of about 0.7 volts when it is conducting about 10 mA. If it were conducting 1 mA, a good rule of thumb is to assume the forward drop has reduced by 100 mV to 0.6 volts.

So, you have a simulated circuit and maybe the voltmeter showing 9.345 volts has some kind of internal simulated resistance that draws a tiny bit of current that causes the diode forward volt drop to be 0.179 volts. Maybe it simulates the standard impedance of a multimeter (10 MΩ).

If it is 10 MΩ then, with 9.345 volts across it, the current is 0.9345 μA or about 1 μA. By my simple reckoning above, the forward volt drop would be a shade under 0.3 volts so, it's not a mile off and remember, I wasn't specific about the type of diode. I expect that if I found a good data sheet for the 1N4001 diode that you used, I might be able to tweak my general rule of thumb to be more indicative of what a 1N4001 exhibits.

Of course, if you think that your simulator has a voltmeter with a different input impedance then you can prove this for yourself by connecting it to a 1 volt supply in series with a resistor and increase the resistor in value until the meter reads 0.5 volts.

This specific observation can be generalized in an important electrical concept that can be frequently seen in electronic circuits - if you connect a 2-terminal element (resistor, diode, etc.) in series to a voltage source, there is no current flowing (open circuit) and, as a result, there is no voltage drop across the element. If the voltage source is grounded, the voltages (referenced to ground) after and before the element are equal.

Let's illustrate this phenomenon with a typical example - a (collector) resistor Rc in series to a power supply Vcc in a common-emitter amplifier stage. When the transistor is cut off, there is no collector current Ic flowing through Rc... so there is no voltage drop (VRc = Ic.Rc= 0) across it... and the collector voltage is equal to the power supply voltage (Vc = Vcc).

From my teaching practice, I have found that this is not an obvious truth for many of my students. For example, some of them think that the voltage after the resistor should be zero; others think that this voltage depends on the resistance, etc. That is why I make them experimentally establish the truth during the introductory laboratory exercise as follows:

Then, I suggest they "worsen" the ideal voltage source by including a 1 k resistor in series and explore the behavior of this real voltage source having 1 k internal resistance - first, without a load (the OP's case). They are surprised that the voltages after and before the "internal" resistance are equal even when they change the resistance (1 k + 1 k, 1 k or 1 k || 1 k). Here is a draft of a student lab report.

I also give them an idea to replace the resistor with forward and backward biased diodes... and they are even more surprised (like OP here) that "the diode is not a diode" when forward biased.

Finally, I suggest the students load this real voltage source by various resistors (1 k + 1 k or 1 k || 1 k) and measure the voltages. Now they see significant difference between the cases. Thus they realize the meaning of the second resistor in the voltage divider configuration.

From all these observations, we can conclude that the resistor (linear, nonlinear, etc.) resists the current... but when there is no current, the resistor has nothing to resist ... and it is not a resistor... it is a conductor that freely passes voltage. So we can formulate just another "golden rule":

A resistor connected through one of its terminals (in series) to a voltage source in an open circuit transmits the voltage to its other terminal.

This property should not depend on the value of the resistance. I wonder, however, what would happen if it were infinite?

The usual answer to "what's the forward voltage of a diode" is "about 0.7V."

That's just an approximation, though, that only holds true at around the rated current of the diode.

If you look in the datasheet of the diode, you'll often find a chart like this one: 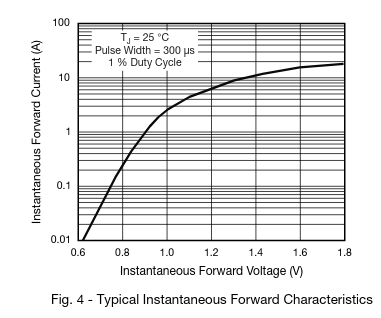 As you can see, the forward voltage varies quite a bit depending on the current.

Here's a slightly different view of the voltage/current chart of a 1N4001: 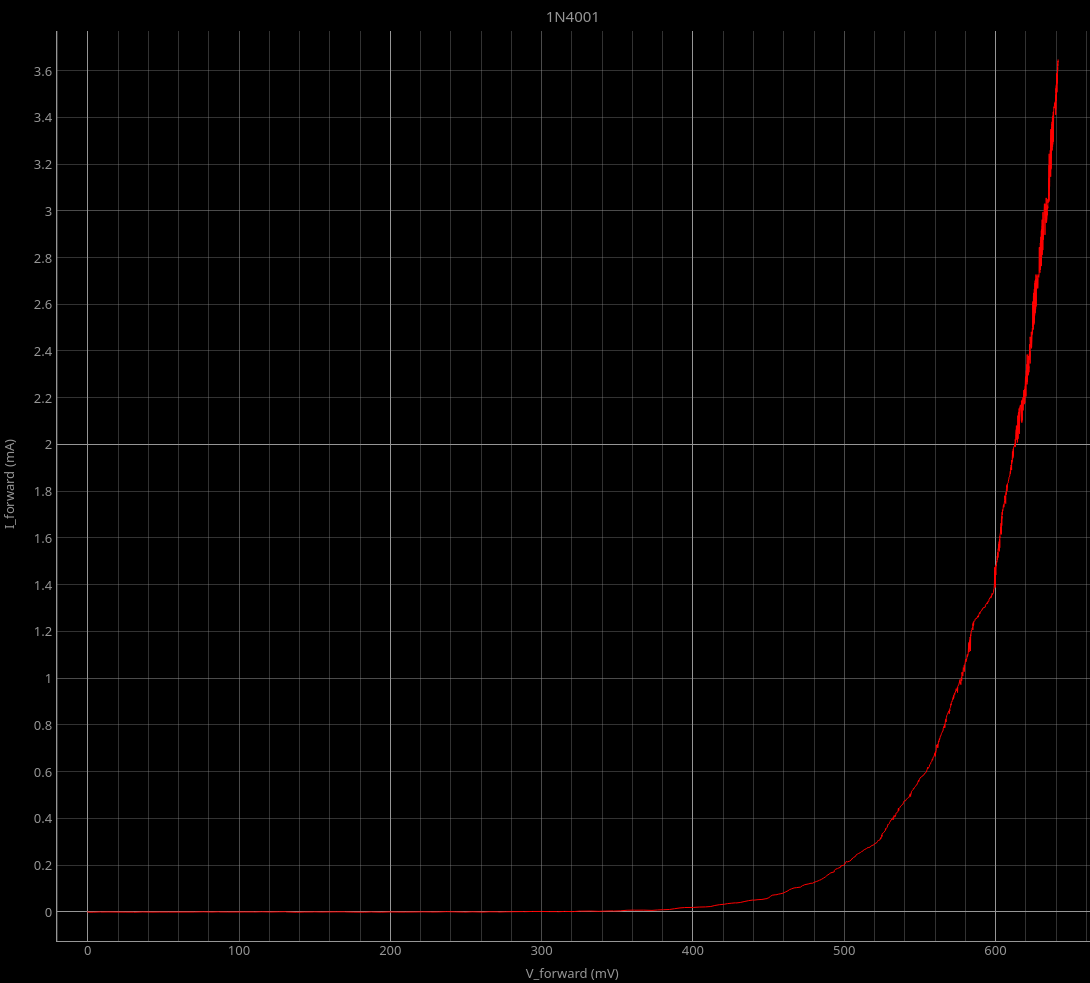 I made that with a 1N4001 diode I had here at hand. As you can see, the voltage drop for currents lower than in the datasheet can also get very low.

I can zoom in on my chart, though, and see what happens at really low current: 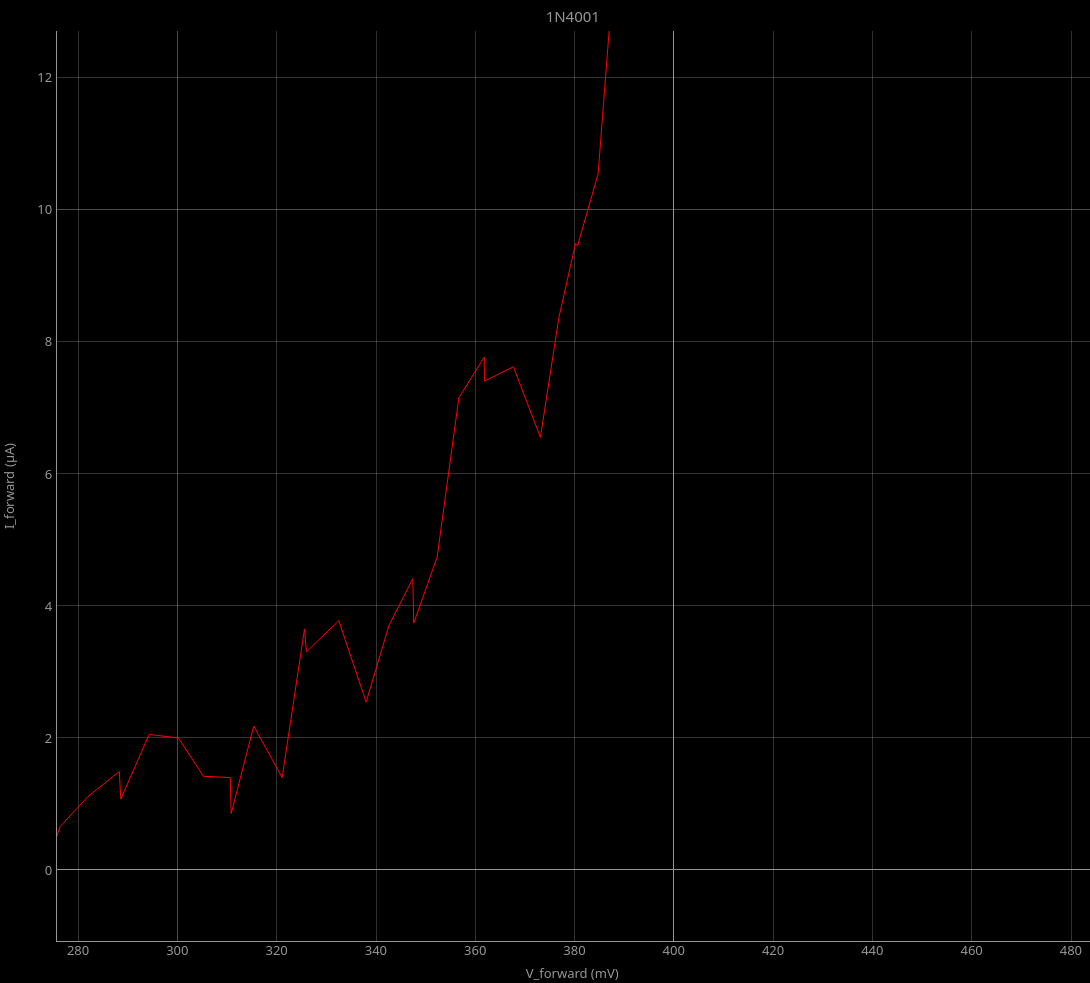 Way down there at about 1 microampere, the forward voltage is less than 300 millivolts.

That's what you are seeing in your simulation.

A voltmeter actually does draw a little current. A typical modern digital voltmeter (DVM) has a resistance of about 10 million ohms. At 9 volts, a current of about 1 microampere will flow through the meter.

That 1 microampere leads to a voltage drop across the diode of something less than 300 millivolts. That's what my chart shows, and what your simulation shows - allowing for a not especially accurate tracer on my side, and a not necessarily exact simulation on your side.

Diodes aren't the digital on/off at the forward voltage thing that the common simplification implies. They are very analog, and do a lot of things that the shorthand "0.7V forward voltage" hides.

Not the answer you're looking for? Browse other questions tagged voltage transistors diodes or ask your own question.