I am new to working with electronics and I am building a simple speaker.

The speaker I built so far (poor sound quality aside) stops working if the volume is above ~80%. By stop working I mean, emitting a stuttering buzz as if only a fraction of the sound is making it through in between noise.

As per the suggestion in the comment, I have measured the voltage out of the booster and it is 5(.02)V both while playing and while "stuttering".

This is an example of the problem (audio).

What you are describing is distortion. Your speaker isn't "breaking." If it broke, it wouldn't work anymore afterwards.

There are a couple of possible causes for distortion in your case:

You need about 7 watts at 5 volts. That's about 1.2 amperes from the voltage booster. That's closer to 1.6 amperes from the battery. Without specifications, I can't tell you if that is too much for the 18650 you have.

Your voltage booster is rated for 2 amperes. It ought to be OK.

They should both be stable - neither value should drop much.

If the battery voltage and the 5V are both good then the problem is that your signal is too high.

The PAM8403 IC used in your modules amplify by a little over 100 times.

A signal input of 1V peak to peak would give an output voltage of 100 volts peak to peak.

That's impossible, of course. The module only has a 5V power supply - the output can only be a maximum of 5V peak to peak.

You have to keep your input signal low enough that the output signal after the amplification will be less than 5V peak to peak. That would be about 50 millivolts peak to peak.

Typical earphone outputs such as your smartphone or MP3 player will have an output level of 200 millivolts peak to peak - or more.

You can reduce the amplification by changing two resistors. 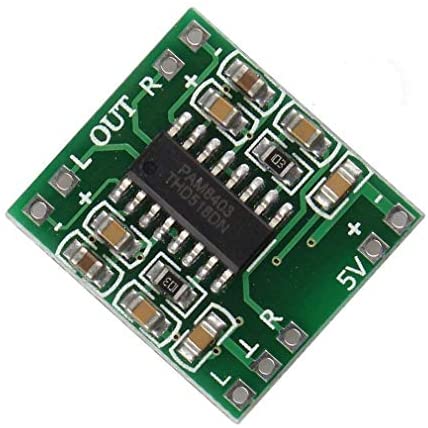 There are two resistors on there that are marked "103" (black with white lettering.) Those are 10 kiloohm resistors.

Replace them with 47 kiloohm resistors. That's an "eyeballed" value that ought to lower the amplification to a reasonable level. If you still get distortion at high volume, just use a couple of bigger resistors.

Rather than replace the resistors, you could just put a resistor in series with each input. That will also lower the amplification. It will also mess with the bass sound, though.

The 10k resistors are smaller than the resistors recommended in the PAM8403 datasheet. That gives it more amplification than it is supposed to have, and leaves it more susceptible to distortion and maybe other problems.

Not the answer you're looking for? Browse other questions tagged amplifier audio speakers sound or ask your own question.

0
MP3 Player: Disconnect 3-watt speaker from amplifier when headphones are plugged in using MOSFETS and the isolated switch on an SMD 3.5mm stereo jack
0
Trying to remove distortion of speakers seems impossible
0
LM386 amplifier buzz when not connected to signal
0
Connect common ground stereo to a device with different ground for each channel
3
Loudspeaker volume issue
5
Do higher impedance speakers generate clearer sound?
0
How to play music on PAM8610 with ESP32?
0
How to balance resistance between speaker wires made of copper fabric?
1
How to stop tone generator sound playing in the amplifier speaker