Is it possible to use two 5V linear regulator to get 10V output like this (I already have a bunch of 5V regulators): 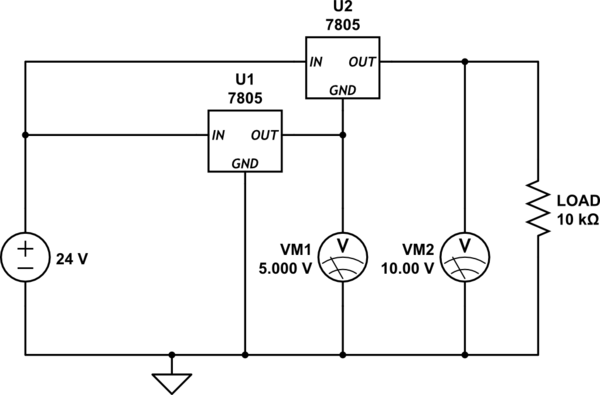 Are there any problems with circuit ?

First of all the bypass capacitors are missing.

Second problem is the quiescent current of the top 7805 that flows out of the GND pin, which the output stage of the bottom 7805 output cannot sink in, as it is only meant to source out current.

This can be fixed by putting an extra load resistor from the top 7805 GND pin to ground, and sizing it so that the quiescent current can't raise the GND pin voltage near 5V, so that extra current out from the bottom 7805 output is always needed to lift the voltage over the resistor to 5V.

If for example the quiescent current is about 7mA, maybe a resistor that is about in the range of 220 to 470 ohms could be low enough.

As others have said you need to provide a path for the GND pin current of U2.

You can also get a higher voltage from an LM7805 by using a zener diode or shunt reference:

The current coming out of the GND pin is a fairly constant 5mA typically, so regulation is pretty good even with a zener (images from TI datasheet): 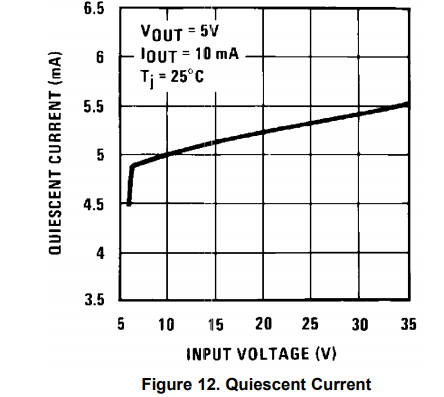 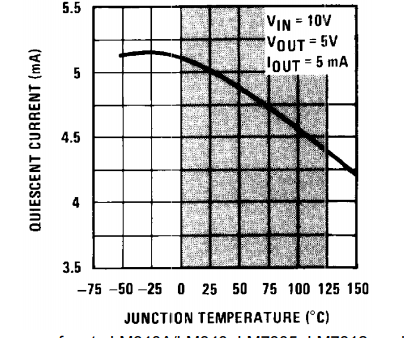 In each of these cases, only one 7805 carries the output current so the second one (where present) will not require a heatsink.

You could replace R3 in my first schematic with a series power indicator LED and resistor, but I have a visceral dislike for circuits that destroy what they are connected to if you remove an apparently innocent LED. Note that I've made the current a bit over 10mA because the 5mA typical is not guaranteed and bad things will happen if the output of U5 is lifted. TI's LM7805 product has a guaranteed 8.5mA maximum over temperature. ST's L7805 appears to guarantee 6mA but I'm not convinced that is correct.

As others have noted, that will mostly work, however I give you Figure 10 from the TI LM78L05 datasheet. 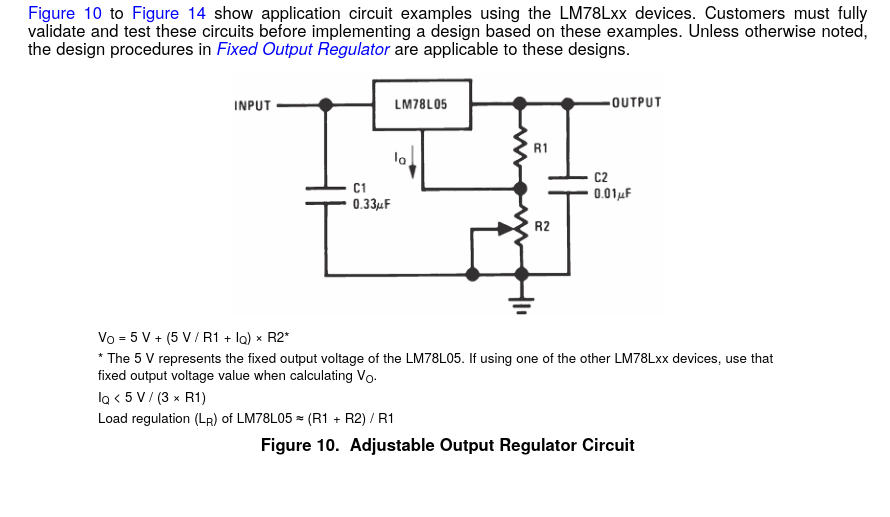 That -- should work. Or almost. The 7805 is a "one quadrant" device, meaning that it only holds regulation for +5V and current flowing strictly out of its output pin. It also dumps current into its "ground" pin.

If you don't do something about that, U2 will dump current into U1's output node, which will float up -- probably until U2 doesn't supply current any more.

So you'd need to check the data sheet of the device you intend to use, and put a resistor in parallel to your "VM1", sized so that it draws at least as much current as you expect out of the U2's ground pin (I'd go for twice as much, to be safe).

Note that there's also a dodge that you can do where you treat a 7805 as an adjustable regulator, wiring it the same as an LM317, but being mindful of the extra current coming out of the ground terminal (and, of course, the fact that the "adjust" voltage is 5V). Your idea, as screwy as it seems on the surface, is better IMHO -- at least, given that you have an excess of 7805 parts around.

Not the answer you're looking for? Browse other questions tagged linear-regulator or ask your own question.