How does a GPS antenna have only two connections yet have all this circuitry inside?

This GPS module I have broke (just gets hot and won't work) so I took it apart and am amazed to see all of this circuitry under the ceramic antenna but only two connections (gnd and signal). When tested there is ~3v between the signal and ground wires. So how does it work to send power over the wire and then also get signal back along the same wire ? 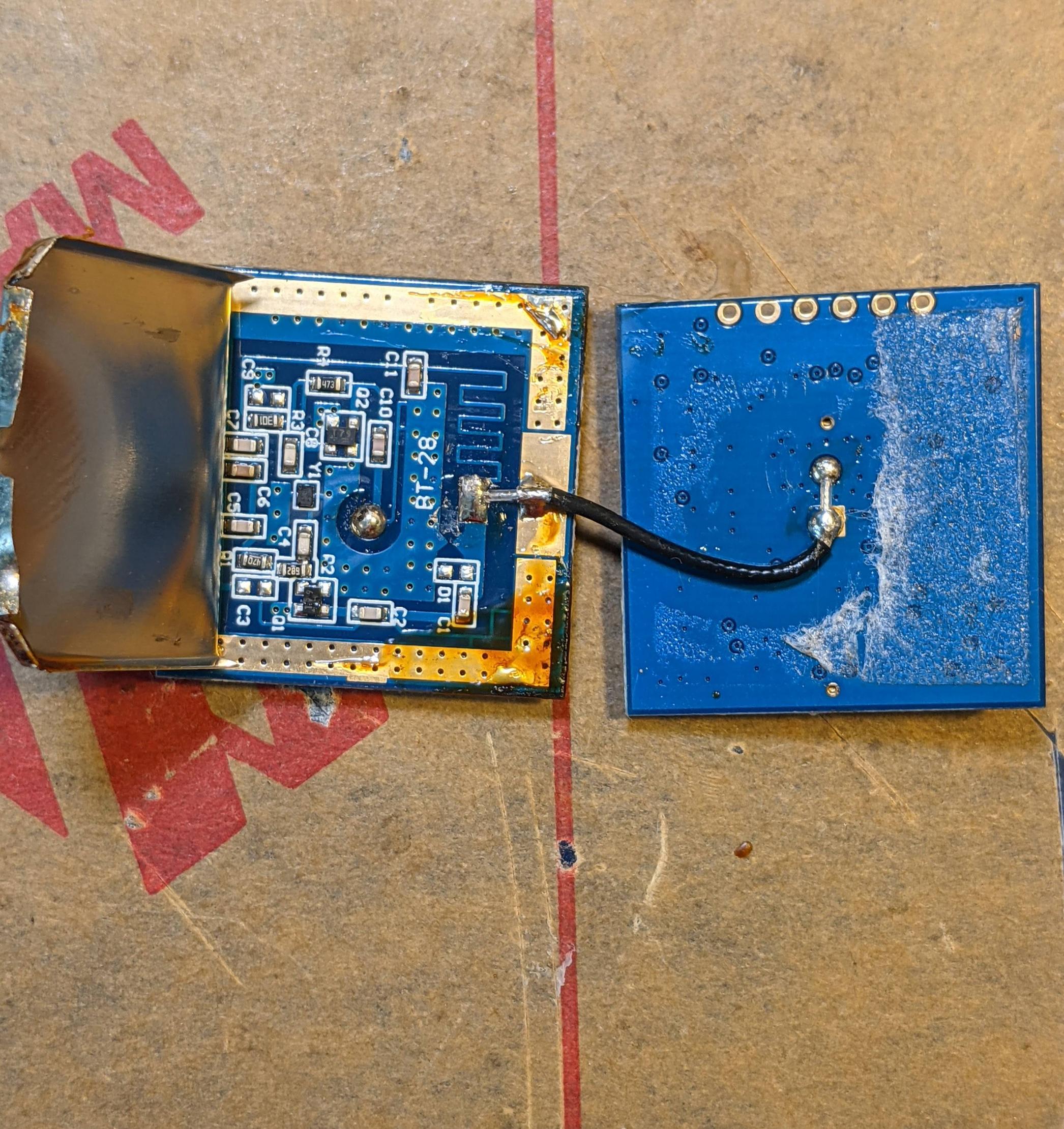 Let's take a look at an annotated version: 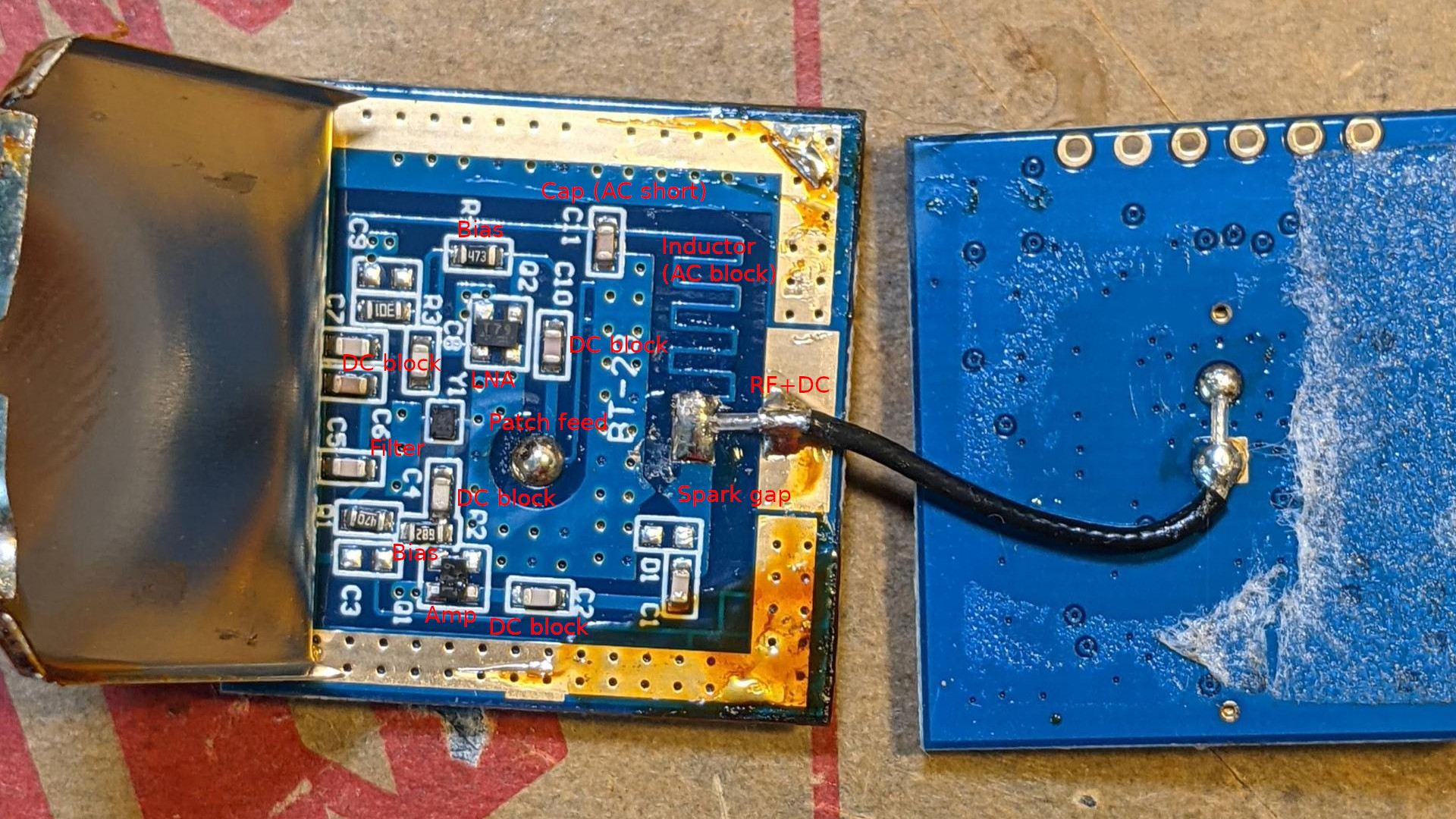 There are two main paths to take a look at here - the RF path and the DC path.

The RF path starts at the patch antenna feed (center of the board) and spirals out and around through two amplifiers and a bandpass filter. With RF systems, you want to amplify the received signal as soon as possible before you run it through a long cable, and that's exactly what's going on here, except the cable is quite short. You also want to limit the bandwidth to limit the effects of out-of-band interference, which can affect the signal of interest through nonlinearities in the amplifiers. It looks like the antenna module is designed for use as a separate integrated module, and the mfr decided to glue it on to the back of the GPS module instead of connecting it with a long cable. Anyway, the RF signal from the antenna is routed through a low noise amplifier (LNA), then a bandpass filter, then a second amplifier to provide a bit more gain before being sent down the (potentially long) cable to the receiver. The RF components are interconnected with DC blocking capacitors so that they can be properly biased.

The DC path starts at the coax cable and leads to the amplifiers. DC power is separated from RF (~1.5 GHz for GPS) using a series inductor followed by a shunt capacitor. These components essentially form an LC lowpass filter that allows DC to pass, but blocks RF. Coupled with a DC blocking capacitor on the RF path, this circuit is called a bias tee, a three-port circuit which combines/separates DC (bias) and RF. Then, the extracted DC is used to power (bias) the amplifiers through bias resistors. Interestingly, it looks like there is no voltage regulator, but I do see what appears to be a spark gap on the board to allow any high voltage that could be applied to the cable to jump to ground.

On the GPS module, there will be a similar bias tee circuit to inject DC power into the coax cable.

The reason that power is injected back up the coax cable is for cost and convenience. The coax cable is necessary for RF, if it can be used for DC power as well then no additional wires are required, saving both parts cost and installation cost/complexity. In this case, it's a bit silly as the cable is only about 1 inch long; usually you see this technique used when there is a decently long cable separating the GPS module from the antenna.

The DC power and RF signals are combined and separated by circuits known as bias tees. An inductor (coil) in the bias tee allows DC power to pass through whilst blocking RF signals. A capacitor blocks DC whilst allowing RF through. A bias tee built in to the GPS aerial feeds DC power from the signal cable to the supply rails of the circuitry and connects the received RF signal to the cable. At the equipment end another bias tee allows DC power to be fed to the cable and connects the RF signal to the GPS receiver. This bias tee can either be built into the equipment or provided as a separate (small) box.

This type of circuitry is often used with antennas and other components that cannot support multi-conductor cables. The main approach is to send DC power down the cable and the AC signal up the cable. The two types of signals are separated by using a capacitor (high DC resistance and low AC impedance) to couple the AC signal to the cable while blocking the DC power and an inductor (low DC resistance and high AC impedance) to couple the DC power to the circuitry while blocking the AC signal.

In general, you can transmit several signals along the same cable if they occupy different frequency bands. You can always filter out the singal of interest with the appropriate bandpass filter.

That's how powerline network adapters send Ethernet signals alongside the 50 Hz / 60 Hz mains power, or ADSL modems transmit data on the same wire the analog phones use for voice at the same time.

Not the answer you're looking for? Browse other questions tagged antenna gps or ask your own question.

4
How does having more antenna help in a networking router
0
SIM908 GPS STATUS "Location Unknown" Error
2
GPS antenna ground plane design considerations and limitations
0
Antenna gps neo 6m
2
Connecting antenna directly to RF module
2
How does concentric antenna wire cross the antenna in a wireless card?
2
What are some ways to isolate a TTL serial GPS device from high frequency noise caused by a processor and other peripherals?
0
SIM808 can't get GPS fix on custom board
0
Struggling with patch gps smd antennas connections
0
AVX M830120 SMD GPS antenna problems - cannot get GPS fix on a prototype board, strange S11 measurements